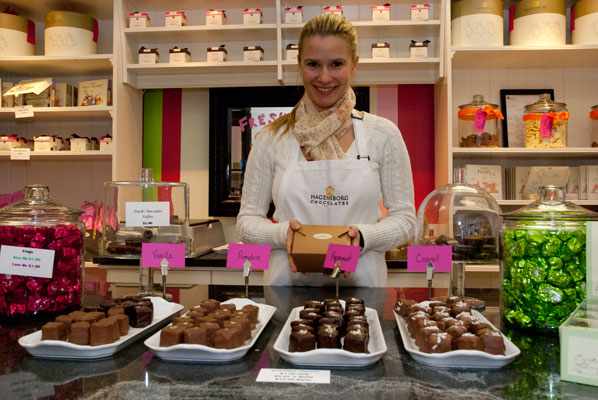 “I like what makes me feel good, and hopefully, that makes others feel good as well.”

Walking in to Shelley Wallace‘s Hagensborg Chocolates, in Burnaby, just east of Vancouver, feels like walking into a friend’s home.  Friendly staff move all over the office/warehouse/shoppe, doing a little bit of everything, whether serving customers at the counter, balancing the books, fixing the computers, making coffee or, in Shelley’s case, running the company.

It feels happy, harmonious and above all, doesn’t take itself too seriously.  After all, Hagensborg’s mascot is a cheeky looking pig named Snuffly, who wallows, balances and dances across their signature line:  the truffle pig bars. 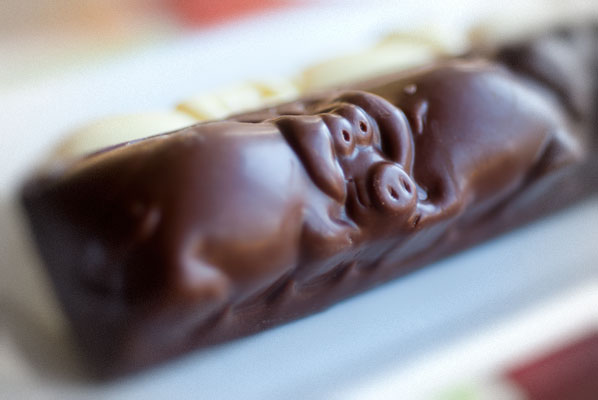 The audacity (or as Shelley says, craziness) of putting a pig on a chocolate bar wrapper (and the bar itself) was inspired by her search for that little something different, in a sea of chocolate bars, which would take the consumer by surprise:

“If I only had a dollar for every time somebody asked me why we put “PIGS” on our chocolate bars I would be a very wealthy lady!  The truth of the matter is quite simple.  We produce high quality All Natural European chocolate truffles.  When we decided to create a chocolate bar we researched where the word truffle originated from and learned everything there is to know about the subject.  What we learned is that truffles are a rare mushroom found in the forest, also called the diamond of the kitchen. To find these unique delicacies pigs were used because they have an innate ability to sniff out these exotic treats.  Understanding that chocolate truffles and truffles have nothing in common we decided to bring these two ideas together, thus creating “The Truffle Pig”.  Aren’t those pigs smart?” – from the Hagensborg website

Surprise and “Of course! How clever is that?” were exactly my responses, when I first spotted these bars a couple of years ago, in my local high-end grocery store.

I bought one as a treat for my sons, but after having a bite (or a pig) of their peanut butter truffle bar, the next one I bought was for me. 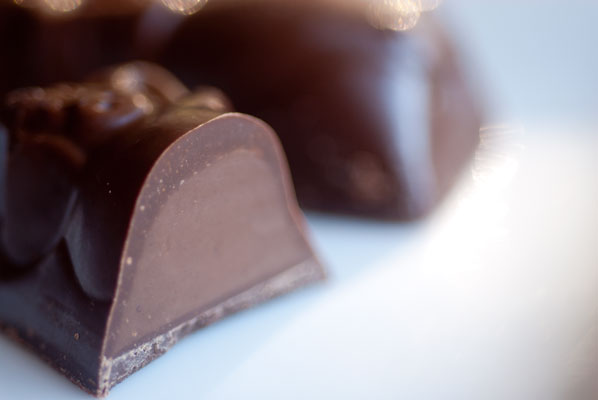 The chocolate is smooth, light and creamy, and the truffle filling is creamy, slightly salty with a rich peanut butter /chocolate flavor, not too sweet.  Easy to eat the whole thing without sharing, but it is nice to break into three.  It also comes in a smaller “piglet” (one pig) size.  You can buy a whole bag of these, displayed in a pretty bag, to put on your desk at work, thereby insuring your position as most popular office person. 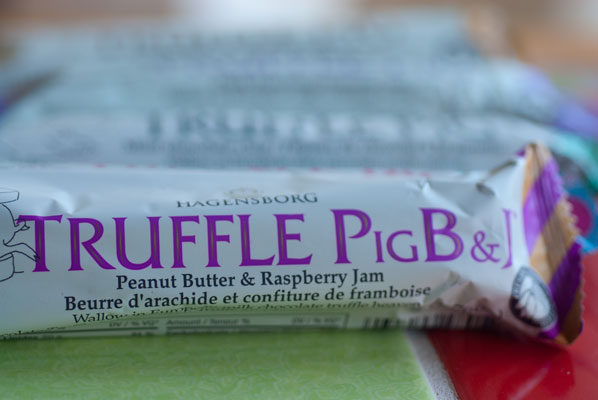 The way Shelley got into “the chocolate life” is a little different than many of the chocolatiers with whom I have spoken.

After taking marketing in college, she raised two children, returned to work as a waitress in Vancouver’s renowned Four Season’s Hotel, learning the importance of impeccable service and attention to detail, and sampling fine cuisine, including the artistry of the, at that time, pastry chef Thomas Haas (who is now one of her favorite local chocolatiers).

9 ½ years of serving everyone from Bill Gates to Sheiks and other dignitaries, was a learning experience unto itself:

“It was such a great education.  Everybody eats.  With the standard of service I learned, I would get to the point with customers where I could almost read their minds –I would know exactly what they needed, or if they were not enjoying themselves, and would know exactly what to substitute to make their experience a good one.  You can’t learn that sitting in a classroom.  The education that came from waitressing at the Four Seasons made me comfortable working with anyone.  I didn’t realize that until later.”

While contemplating a career change, she consulted some of her long-time customers at the Four Seasons, and among the many job offers, one of those customers mentioned he had a chocolate factory he was going to be shutting down.

Intrigued, she asked to view the factory.  This proved to be a pivotal moment in her life.  She says that “I stepped in to the factory, and there were 2 stairwells going down onto the production floor.  I smelled the aroma and thought I’d died and gone to heaven.” 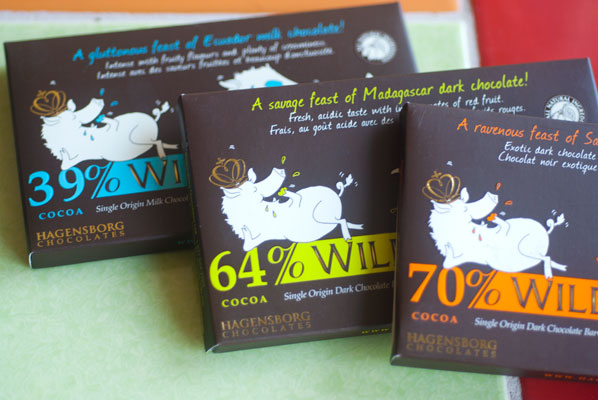 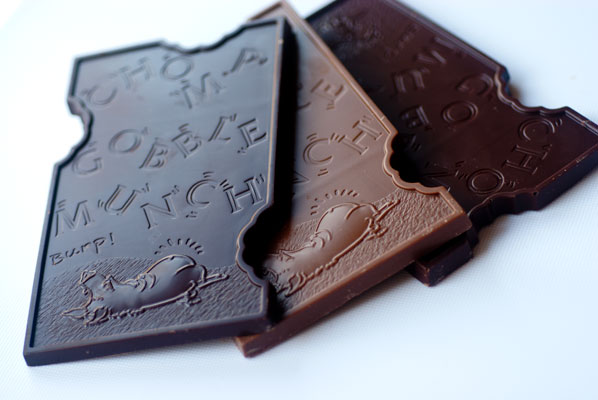 She decided to leave the Four Seasons, and devote herself to turning the Hagensborg Chocolates line into something unique.  After successfully re-developing and re-branding the chocolate line, she bought out the name, and the brand and re-imagined the line into what it is today.

Highly skilled at sales and marketing, she put together a loyal team of people who have been with her “since the beginning”, including chocolatiers who devise the recipes from her suggestions and ideas.

She is also refreshingly honest in admitting what she doesn’t know.

“I am not a chocolatier.  Not yet.  My role here has been product development, but right from the beginning, I would go down to the factory line. I always wanted to know how to do it – I wanted to learn to actually make chocolate.

Ok yes, I own a company but I really need to learn how to make it.  I know, it’s crazy.  My story is almost opposite to a lot of people’s.

I had met Pam at some of the fancy food shows, and she was always very friendly, so when I found out about the program in France offered by Pam at Ecole Chocolat, off I went to Valrhona’s Ecole du Grand Chocolat, for a week.

I was the only one in our group, with a viable chocolate company – and the only one who couldn’t temper chocolate.  Pam kept saying ‘You can do it!’  I kept thinking, ‘I am going to master this if it kills me’.  I’ve had help and advice from other local chocolatiers.  Last April, I went to the Callebaut school in St. Hyacinthe, Quebec to study chocolate and bonbon making with school Director Derrick Tu Tan Pho.”

And just recently, Shelley has opened her first retail store – the one I visited the other day.

“It’s my creative outlet – my staff teases me that it’s a ‘great toy’.  But I love having it.  And it is making me learn to make chocolate.  Otherwise, I’d go back to selling and marketing.  I have failed so many times – but I keep going.  I like a challenge.  I like to know why things work and don’t work.”

On the day of our visit, she has created trays of tasty hand dipped S’mores – the signature piece of the shop – surrounded by all the rest of the product line, displayed with her wonderful sense of whimsy, in hatboxes, pouches and “pignic” cigar boxes. A treat for the eye.  And it just plain smells good! 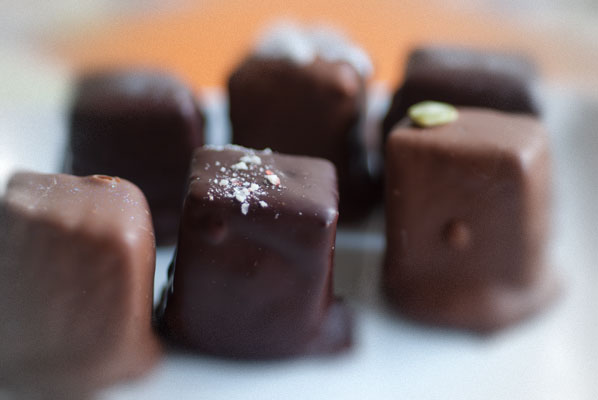 Recently, while feeling playful, she developed a new line of “nostalgia” bars, for the Truffle Pig line:  Peanut Butter and Jelly, Chocolate Chip mint, and Bubblegum, with red cocoa butter and chewable pieces ‘like the ice-cream’. 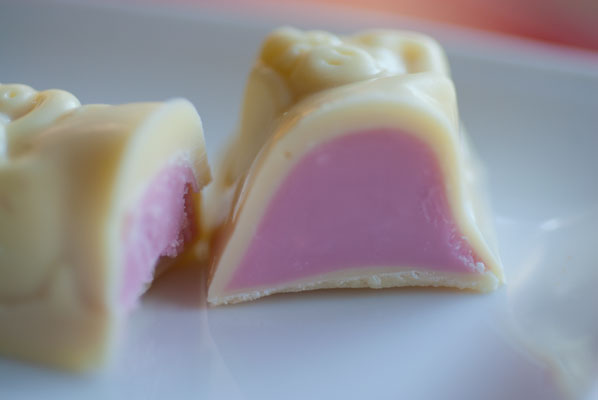 “The amount of ‘You’re doing WHAT?’ I got from that bar, was worth developing it just for that reaction.

Every time I develop something new it becomes my favorite, but I am really excited about the Wild Boar Single Origin bars.  My kids’ palettes have developed a taste for the finer things, too.  They really like the Ecuador 39%.  They are developing expensive taste!”

“I hope it feels like a family run business.  I’m not very boss-like, so we’re not at all corporate.  I really just want to put my chocolate out there, and to have fun doing it, because if you can’t have fun with chocolate, what’s the point?”

The princess theme on her blog (Shelley calls herself and her staff the Chocolate Princesses) came from that day she entered the factory:  “Like a princess entering her kingdom – I still find it hard to believe I’m really in this industry –that this is completely my baby. I wanted to show my kids you can do whatever you put your mind to, with dedication and a lot of hard work.”

And I think there can be no doubt, she has succeeded, delicously. 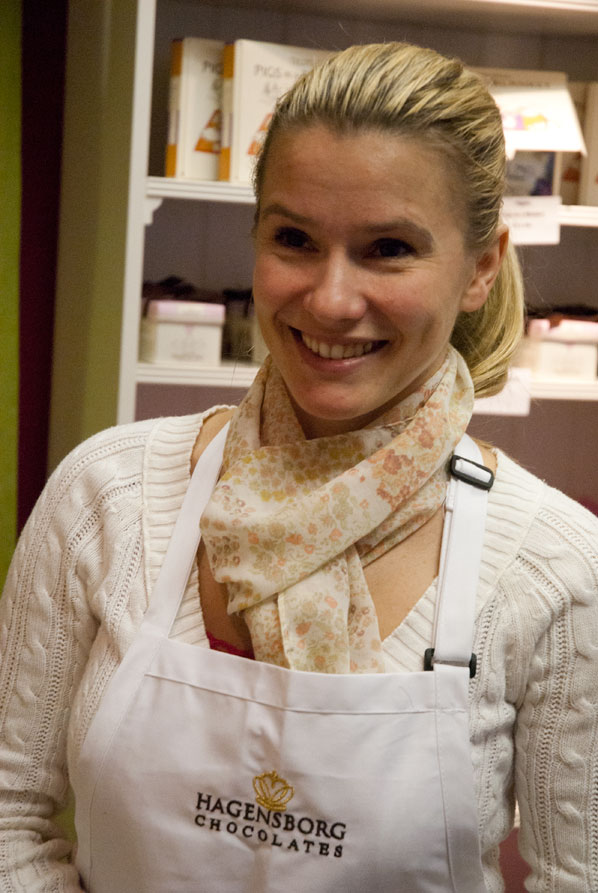