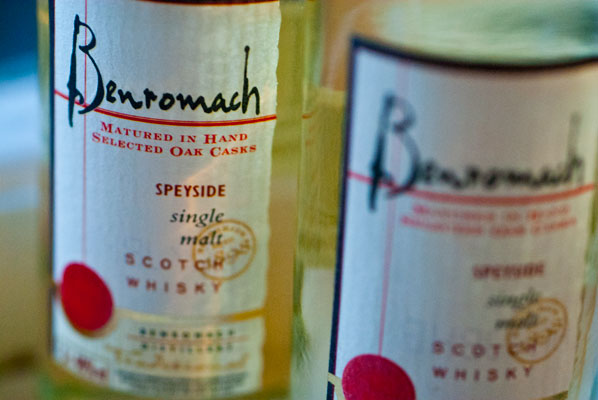 It’s that time of the year, again.  I don’t know whether it’s because my DNA has begun forcing itself to the fore as I get older, but I have noticed that for the past few years, as the New Year approaches, I feel a pressing need to return library books, settle any debts incurred over the year, return anything borrowed from a friend, and most remarkably, clean the house from top to bottom (no mean feat for me and a downright torture for my boys).

All of this is in preparation for Hogmanay, December 31st, the day before New Year.  This is a date of special significance for anyone of Scottish origin, as it is most important to set everything in your home to rights, lest you be skittery winter (translation from my mother:  disorganized) for the upcoming year.  Apparently this term is meant only to apply to the last person out of bed on Hogmanay, but my Mum used it to her own devices, to get us all to clean the house.

“Christmas was not celebrated as a festival and virtually banned in Scotland for around 400 years, from the end of the 17th century to the 1950s. The reason for this has its roots in the Protestant Reformation when the Kirk portrayed Christmas as a Popish or Catholic feast and therefore had to be banned. Many Scots had to work over Christmas and their winter solstice holiday was therefore at New Year when family and friends gathered for a party and exchange presents, especially for the children, which came to be called hogmanay.”

Scotch is, however, the traditional tipple of First Footers:  the first person to cross the threshold of your house, after midnight on New Year’s Day.  This is another tradition with a strict set of rules, because the job of the First Foot is to bring good fortune for the coming year.  In order to successfully do this, the First Foot should be a tall, dark haired man (presumably because the Viking invaders were red haired).

Apparently, my Dad and his pals made a bit of money for themselves, as young men in Scotland at New Year, by going around door to door, First Footing.  They are supposed to arrive with gifts for the household (traditionally, black bun, shortbread, coal, and of course, scotch) as a blessing, and are, in turn, fed food and drink.  According to my Dad, in his day, it had evolved into the dark haired man arriving with a bottle of scotch sticking out of his coat pocket, and being given money!

If it looked like we would not be receiving any visitors on New Year’s Eve, my Mum would send my Dad or, in a pinch, my brother (who has lighter coloured hair), out the back door shortly before “the bells” (the stroke of midnight).  They would then walk around to the front door, and be welcomed in, once we were sure it was past midnight.

I remember one year, it was our rascal of a dog, a notorious escape artist, who was technically the First Foot, and my mother rolled her eyes in exasperation:  “Heaven only knows what sort of a year it’ll be!”

He was a dark haired dog, so we thought that might mitigate the consequences.

I would like nothing better than to have our wee family with the whole wonderfully eccentric clan of my extended family, this New Year, so I have decided to give a nod to the day with an “Homage to Hogmanay” chocolate scotch whiskey truffle. 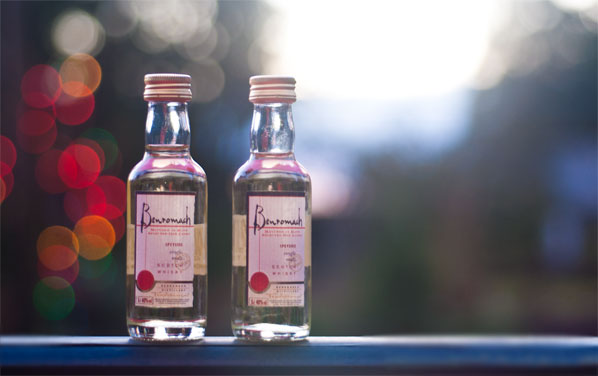 I have two very small bottles of excellent scotch, from our summer trip to Scotland, from Benromach Distilleries, in the Speyside region.

According to For Scotch Lovers…

“The Speyside malts are the sweetest whiskies. Although they do not have as much body as some Highland malts, their flavours are richer and more complex with fruity, leafy and honeyed notes and a subtle delicacy of aroma which, once recognised, should be easy to identify.”

This particular bottle of scotch is very light in colour, with a pale honey tone.  As soon as I open the bottle, the aroma opens up my nasal passages, and hits the back of my palate.  This is why I do not drink scotch.  I would be flat on the kitchen floor. I believe this is a scotch that can stand up to a dark chocolate ganache. 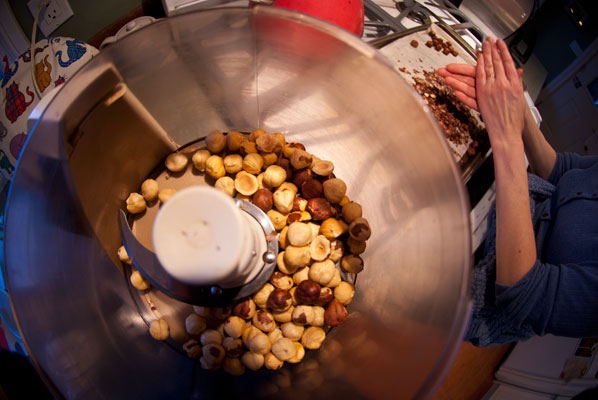 Representing the best of Scottish New Year traditions and superstitions, this truffle is composed of:

For the truffle recipe, I am indebted to the passionate scotch lovers at For Scotch Lovers, who unfortunately no longer have a link to the recipe on their website.  This recipe, at This Week for Dinner, is almost identical. 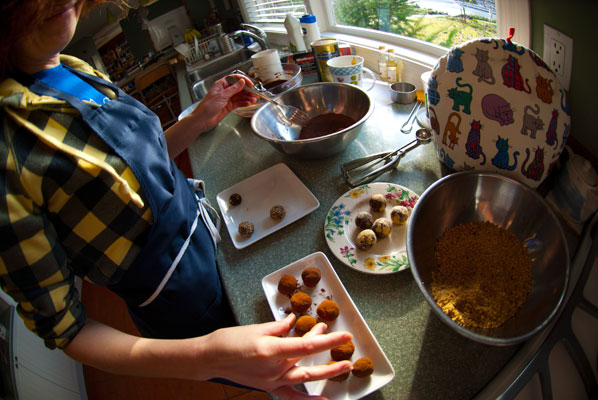 The changes I made were in technique.  Instead of pouring the hot cream over the chopped chocolate, I used the ganache technique from the Ecole Chocolat curriculum:

Although I am no scotch lover, these truffles turned out really well.

And because I am no scotch lover, they are perfect for sharing. 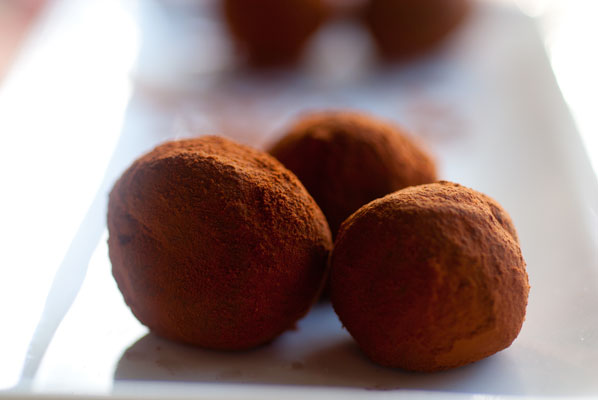 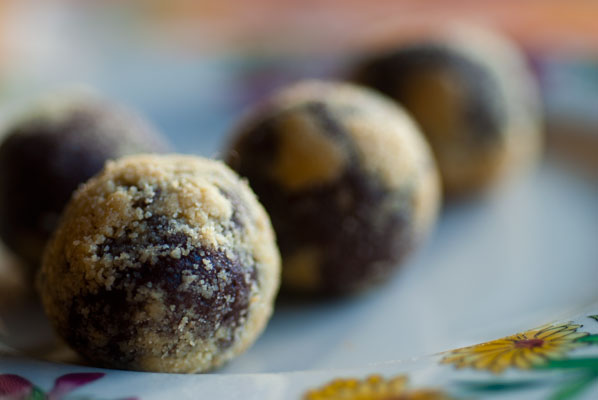 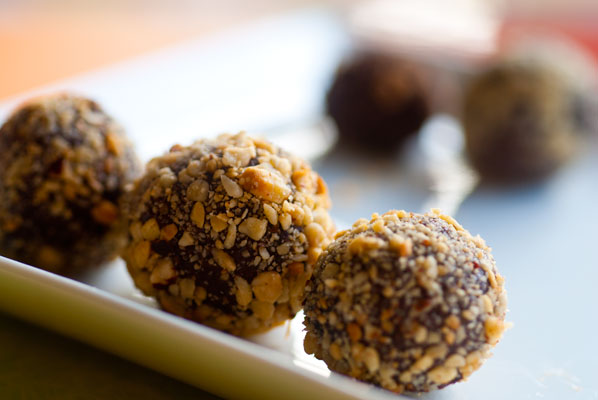 And so tonight, I will cross arms and link hands, and sing Robert Burns’ Auld Lang Syne at the top of my voice, and instead of taking a right good-will draught, I will raise one of these truffles and savour it, for all my family and Auld acquaintance.

“A guid New Year and mony may ye see!”

And surely ye’ll be your pint-stowp !
and surely I’ll be mine !
And we’ll tak a cup o’ kindness yet,
for auld lang syne.

We twa hae run about the braes,
and pu’d the gowans fine ;
But we’ve wander’d mony a weary fit,
sin auld lang syne.

We twa hae paidl’d i’ the burn,
frae morning sun till dine ;
But seas between us braid hae roar’d
sin auld lang syne.

And there’s a hand, my trusty fiere!
and gie’s a hand o’ thine !
And we’ll tak a right gude-willy waught,
for auld lang syne.

We twa hay pedilt in the burn,
fray mornin sun til dyn;
But seas between us bred hay roard
sin ald lang syn.

An thers a han, my trustee feer!
an gees a han o thyn!
And we’ll tak a richt gude-willie-waucht,
fir ald lang syn.

And surely you’ll buy your pint cup!
and surely I’ll buy mine!
And we’ll take a cup o’ kindness yet,
for auld lang syne.

We two have run about the slopes,
and picked the daisies fine ;
But we’ve wandered many a weary foot,
since auld lang syne.

We two have paddled in the stream,
from morning sun till dine ;
But seas between us broad have roared
since auld lang syne.

And there’s a hand my trusty friend!
And give us a hand o’ thine!
And we’ll take a right good-will draught
for auld lang syne.