It’s a tradition in the theatre for actors to exchange opening night presents – a little something to wish each other well.

I’m currently appearing in the stage version of It’s A Wonderful Life at the Arts Club on Granville Island in Vancouver.  We opened last week.

While searching for the perfect way to celebrate the world premiere of  The Patron Saint of Stanley Park and the opening night of our friends and colleagues “across the alley”, at the Arts Club Revue Stage, the cast and crew of It’s a Wonderful Life have been wracking our collective brains.

They (the cast of The Patron Saint of Stanley Park)  had come up with a terrific opening night accolade for us – a Lindt advent calendar, with our faces superimposed over those of the happy elves in the original design.

Not that it’s a competition, but we had to come up with something at least as creative.

While perhaps not as classy, my offering will, I think, get their attention.

I have been remiss the last couple of weeks, in my Ecole Chocolate homework, with the rush of our show rehearsing and opening.  In the last few days, I have been madly attempting to catch up, especially on techniques for producing centres:  creamy, chewy, crunchy and chocolate (as in truffle) are four major textures, and I had, up to this point, only managed ganache, marshmallow, and peanut butter.

I have also avoided tempering milk and white chocolate, as I needed to feel at least comfortable with the technique.  I believed dark chocolate’s intense and robust nature could stand up to my enthusiastic but sometimes rough attempts better than the much lower melting points and delicate natures of milk and white.  This is ridiculous.  They are not horses.  I can do this.

Time to get to work.

I read the technique lessons on

An idea is forming in my head. 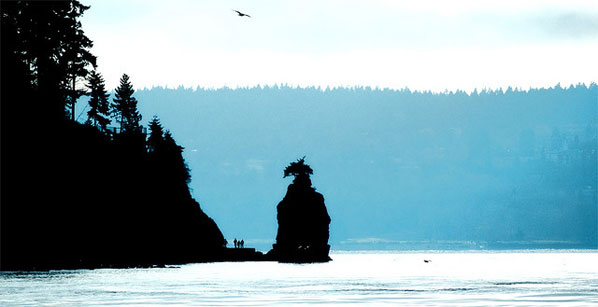 Stanley Park is one of Vancouver’s most famous landmarks.  It is home to old-growth evergreen trees, stunning views of the ocean, a 10 kilometre seawall walk and many forest and ocean animals. It’s a 1,000 acre escape, smack in the middle of Vancouver.

The elements of air, water and earth meet and overwhelm the senses in this beautiful place.

I will create beautiful and delicious chocolate animal scat. 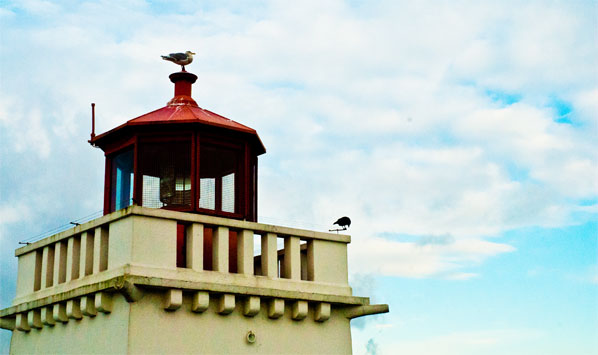 Air – for my first attempt at tempering white chocolate, I create mendiants, to represent the ever-present Stanley Park seagulls. Instead of sticking to the traditional circular form, I drop the tempered white chocolate onto a Silpat mat, to form splatters, into which I seed cacao nibs (for grit – I have watched seagulls swallow whole sea stars, covered in sand), and slivers of dried organic apricot (to represent the mussels the seagulls love to eat).  They are slick and shiny, and dare I say it – well tempered! 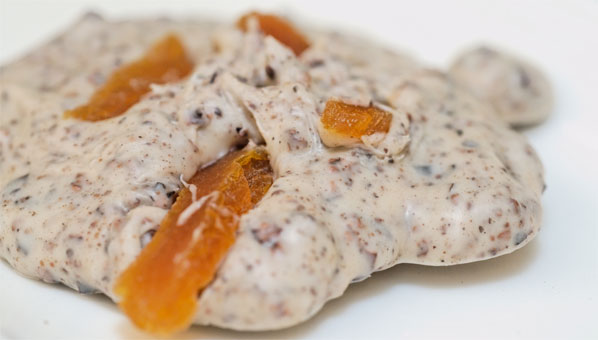 I actually had fun tabliering the white chocolate.  I discovered that using my left hand with the bench scraper, to pull the cooling chocolate into the centre of the marble slab, and using the off-set spatula in my right hand to spread the chocolate on the slab, and to wipe off the scraper, gave me much more control over the whole moving mass, and made it much easier to transfer back into the bowl.  I had far less waste, this time.  Practice does make perfect. 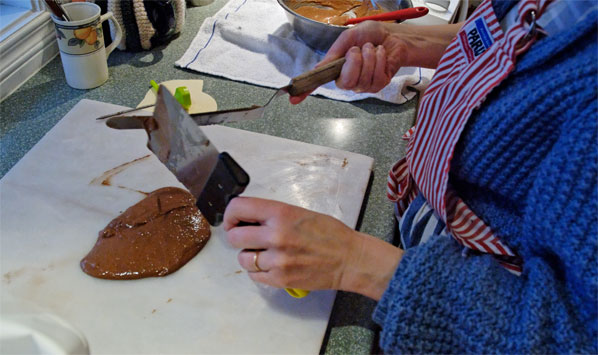 Water – represented by Canada Geese, and to do them homage, I turned to milk chocolate gianduja.  Another fun and relatively easy preparation, I roasted the hazelnuts and ground them in my food processor, to a butter-like consistency. After just melting the milk chocolate, the two were swirled together, into a wonderfully fragrant mass, which I then tempered (since I was feeling so confident, after the success of the white chocolate), and let harden to piping consistency. 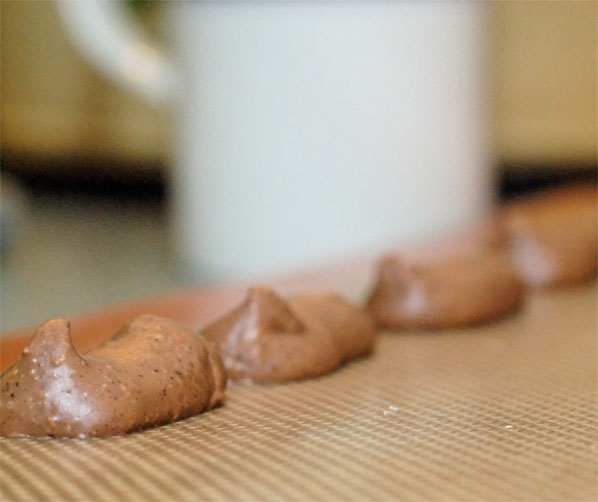 To a chorus of “eeuw!”, from my son, I had great fun piping “goose poop logs” onto the Silpat mat.  I took his reaction as high praise, because, if you have spent any time walking around Lost Lagoon in Stanley Park, you will have stepped in the Canada Goose’s calling card, and my creations must have looked enough like what he’d scraped off his shoe to cause such a visceral response.  I took a more critical view, and next time, may try pistachios, to give a more realistic greenish tinge.  There was a bit of the hardening gianduja left over in the piping bag, which simply would not come out.  I went at it with a spoon, and I have to say, it was delicious.

Earth = skunks.  We get these critters roaming through our back yard all through the spring and summer, and I must admit I have a soft spot for them.  They are incredibly near-sighted, hurt no-one intentionally, and are so darned cute when they are babies (kits), rolling all over each other on the lawn.  That being said, I didn’t want to re-create their odour for this gift, so instead, I chose to make  bittersweet Jamaican rum truffles, adorned two ways.

For the truffle mixture, I owe a debt of thanks to Alton Brown from the Food Network. After letting the mixture set, I scooped it into balls of various different sizes, leaving them a little “rough around the edges” to give a more realistic look. 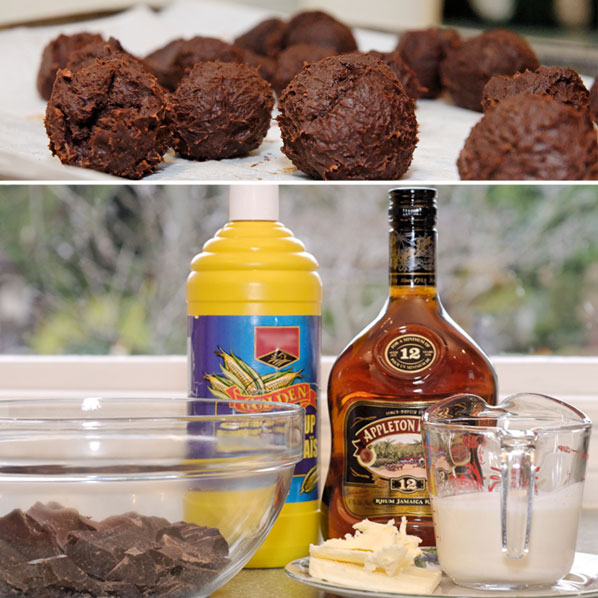 Instead of the technique Alton Brown suggests for enrobing the truffles in chocolate (He scoops the melted chocolate into a ladle and rolls the truffle around in it), I saw it as a perfect opportunity to use the enrobing fork and wire basket scoop I have recently purchased for the course, and I think this gave me a nice thin, even coating.  Most of the truffles I left, at this point, as they were shiny and “fresh’ looking.  The remainder, I rolled in cocoa, for a more “aged” look.  I know these ones will be a big hit, as I made a batch of these truffles last week for the opening of our show, and they were a hit.

Best to make these rum truffles quite small as they pack a huge flavour, and the combination of rum and bittersweet chocolate cries out for you to pop the whole thing in your mouth, at once.

The boys kind of shook their heads in patient amusement as I packed all the “specimens” into plastic “collection containers”.  My wonderful partner made realistic looking “species” labels for them, and I can’t wait to drop them off at the theatre.

A better way to wish my fellow thespians “Merde!” for their opening night, I cannot imagine. 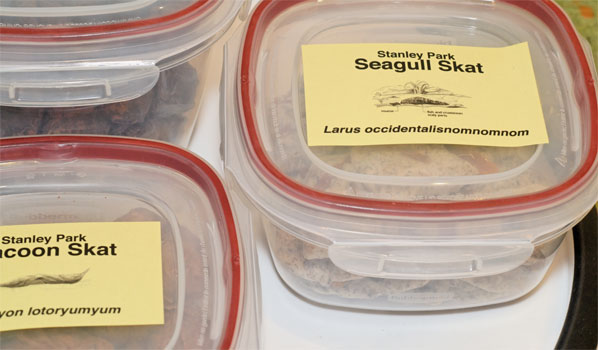