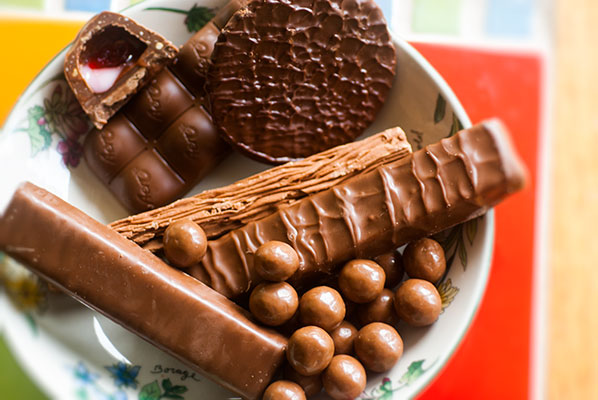 Maybe it’s because a friend of mine posted a clip on Facebook of the 1987 Crystal Light aerobics championships and I thought, “Oh yeah, I wore that spandex and those Reeboks” or  because a few days ago my son and I made a recipe from a magazine clipping I have kept pasted in a book and I realized it is from Spring 1984, or because I’ve just had a birthday and feel really old, but I have been revelling in nostalgia this past week.

I made myself a pot of tea and started looking through my old copies of Chocolatier magazine.  I have the premier issue – that’s how old I am.

My set of magazines goes from 1984 to 1988, at which time I guess, my Mum stopped buying them for me.  I was, at this point, living my life out of a couple of suitcases, touring with a young people’s theatre and performing in regional Canadian theatres, from coast to coast.   I made many chocolates and cakes in strange settings, including using theatre Green Room ovens,  which are notoriously unpredictable temperature-wise, and usually encrusted with the splatters of years of Tech Week Meals.

I made one memorable, towering chocolate Susan Mendelson Cointreau Fudge birthday cake for a friend, while I was working at the Globe theatre in Regina Saskatchewan, and living in the YWCA.  I had to keep all my baking supplies in a box in my room, then run them and myself up a flight of stairs to the communal kitchen.  I bought everything in bulk, in plastic bags with numbers on the tags.  You can see what’s coming, right?

With so many women in residence, the oven was in high rotation.  I hurriedly mixed my ingredients, stuck the (takeout food, accordion folded, disposable aluminum) cake pans in the oven when it was my turn, and was darned pleased when they all came out level with no splitting tops, and very solid.  Hmm.

I made the rich cointreau chocolate fudge icing the next day at the party house, and iced the layers into magnificent swirls just before the guests arrived.  It was a 2 ½ foot tall thing of chocolate beauty, and we were all terribly excited to dive into it.

The oohs and aahs that initially greeted the cake turned to shocked silence as the first bites were taken.  “It’s not an overly sweet cake, is it?” said one, politely.
“Tastes like beef jerky,” said another, not so subtle friend.

“Everyone, put your forks down!” I barked, as I ran around gathering up plates and hurling the wretched contents in the garbage can.  The birthday girl followed me into the kitchen and tried to suggest (bless her kind heart) that we should just scrape the icing into bowls and eat that.

I burst into tears, threw myself on her and vowed, sobbing, to re-make the exact same thrice-damned cake the next week.  And I did, and it was delicious.

The cookbook that ill-fated cake came from was Nuts About Chocolate by Susan Mendelson and Deborah Roitberg, published in 1983.  Still one of my favorites, my spiral bound copy is falling apart from constant use, but I will never part with it – old friends are the best.

It was in the 1980s that I really discovered good chocolate, and began the long love affair of cooking with it and learning about it.

So many of the recipes in these magazines are covered in blobs of thirty year old chocolate, they are difficult to read – but this time I re-read the up-to-the-minute-trend articles and the pages of advertisements and chocolate advice columns of the day. 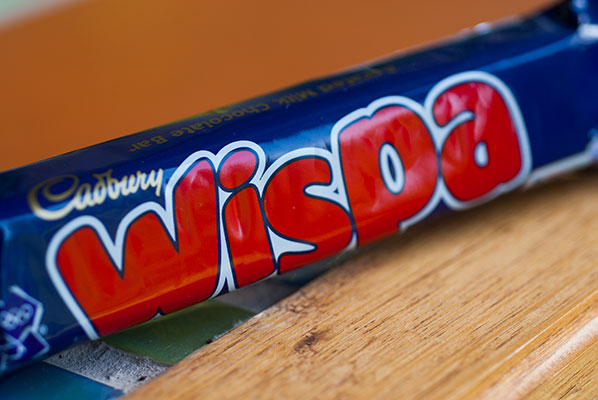 Here are some interesting new things that were happening in the chocolate world, 1984 – 1986.

From a Chocolatier article on Cadbury’s:  the newest item currently being test marketed in some parts of the United Kingdom is a uniquely textured chocolate bar called “Wispa”.  Introduced in Britain in 1981, it has proved successful and will soon be available in the United States.

Now, a Wispa is similar to the Rowntree (now Nestle) Aero bar – an aerated milk chocolate bar that has been around since 1935, so I was surprised to see it was undergoing all this test marketing – except that people are fiercely loyal, even to supermarket chocolate brands, and especially Cadbury.

Though Aero has been hugely successful (certainly in Canada, where I’m from), the Wispa did not fare as well, was pulled from the market in 2003, then re-launched after a fierce internet campaign, in 2007.  It is still available in the UK and import shops here, and in my opinion, does taste superior to Aero.

A year later (2008) that “mad food scientist” Heston Blumenthal, put out his recipe for aerating fine chocolate at home.

Lots of fun to do with really good chocolate, and created a fun, new chocolate trend.

I urge you to try it with fine chocolate – you will never feel the same about Aeros or Wispas again!

I dove into other issues and almost spit out my tea when, glancing at this, in the Most Frequently Asked Questions column, moderated by Judith Olney, someone asked about using paraffin wax in chocolate work, “to help take the guesswork out of tempering” – ew.

Ms. Olney wisely guides the asker towards proper tempering of the chocolate rather than choosing to use a substance that is a complex mixture of hydrocarbons made from petroleum distillate, but also graciously offers the proportions one would use if he persists in using it.  Call me a food snob, but I hope he went with her first suggestion.

Also in this excellent column, someone asks about a source for buying white chocolate chips.  My, how times have changed.  In 1984, according to Ms. Olney,  Saco foods in Wisconsin was test marketing them, Guittard marketed them on the West coast of North America, and Fred’s chips (a small company) had them available on a limited basis.

I really am an obnoxious food snob when it comes to white chocolate, and have clearly passed this on to Younger Son, who is fast becoming the chief cookie baker.  When I read this out to him he snorted, “Why wouldn’t you just make your own chunks from the good stuff?”  Mea culpa.

After reading Judith Olney’s columns, I took down my very dog-eared copy of her book, The Joy Of Chocolate, published in 1982.  Among the beautiful pages of “chocolate as artwork” I hunt for a recipe I made for the wedding of two very funny and talented friends (actors/artistic directors/physical comedians), who got married on a boat in the summer of 1987, while we cruised the Inner Harbour of Vancouver.

For this outside-of-the-box couple, I made the dark chocolate Apricot Cream in a Chocolate Sack.  The recipe called for you to coat an oiled, upended (over cans) paper bag with layers of tempered couverture.  With the apricot cream, fresh raspberries and strawberries spilling out of the bag, it was supposed to look like a knocked-over grocery bag and, when placed on a marbled slab, it looked fantastic.

It was one of my first attempts at tempering, and I don’t think I succeeded at all:  the resulting bag was dull, streaky and bendy, but it held together on that hot day and everyone oohed and aahed at my daring.

One of the wittier guests made a toast comparing every offering of food, which had all been brought by the guests, to the couple.  When he got to mine, he said, “Linda is like … this bag … umm, overflowing with good stuff.”

It was a laughter-filled afternoon, and when, as we disembarked, I commended Linda on her choice of venue, she said, “Wasn’t it a great idea?  Your guests HAVE to leave at the end of the boat ride!”

They have been married now for almost 26 years.

Yep, I guess I am old.  But it sure has been fun playing with all that chocolate.

“…now I have a craving for a Cuban Lunch…I have not thought about them for over 30 years… milk chocolate, peanut butter and peanuts in a square.  Red frilly cup underneath, clear plastic packaging.”

“I used to love those chocolate haystacks… haystacks is the polite name … we used to call them “poo drops” and they were a favourite Christmas treat … made with chocolate and coconut.”

“I used to get ‘Ninety-Nines’ in England as a kid from the ice cream van, which is a Cadbury’s Flake, with ice cream in an ice cream cone.”

“Shasta used to make a chocolate soda and it was rather nasty.”

“There was a moment when I was passionate about Cherry Blossoms. I think I was about 9. I developed a whole method of eating them that involved opening up a small whole and sucking out that disgusting syrup, then getting at the plastic cherry, then eating the remaining chocolate that made it last a really long time.”

“The icebox chocolate wafer cake, made from Nabisco Chocolate Wafers and whipped cream according to the recipe on the box.”

“Ice cream bars hand-dipped in chocolate and your choice of nuts or sprinkles at Purdy’s.”

“Smores at Girl Guide Camp. Must be made with a milk chocolate bar, marshmallow roasted on a stick over an open fire till it catches fire and squished between two graham crackers and eaten hot.”

“Crunchie Bars. You let a bite sit in your mouth, the sponge toffee melts and collapses, and you are left with the chocolate coating to suck on.”

“Maltesers with the malted sponge center covered in milk chocolate.”

“Peach Cream chocolates that Laura Secord used to make and sell at the Lougheed Mall Shop.”