Last week, I spent a couple of Zen-like sloth-paced days caramelizing white chocolate in my oven.  The process cannot be rushed by turning the heat up or you end up with a pan full of seized, burned chocolate bits(a crime), and requires you to stir the mass every ten minutes or so.

I love those “or so” recipes. Little stress, and a generous helping of “trust your senses” involved.  My kitchen smelled fabulous for days afterward.  I would highly recommend realtors try this as a way of conveying the aroma of homey-ness to prospective house buyers – well, you have to stick around the house all day to show it anyway, don’t you?

So now I have a mason jar full of deep golden honey coloured, biscuit-scented chocolate and we have tried it in various un-tempered and delicious ways, including spreading it on toast and pouring it on top of ice cream.  In its un-tempered form, if left to sit, it hardens at room temperature with streaky white cocoa butter lines running through it.  When heated for pouring, it has the consistency of condensed milk or honey, in other words, viscous. 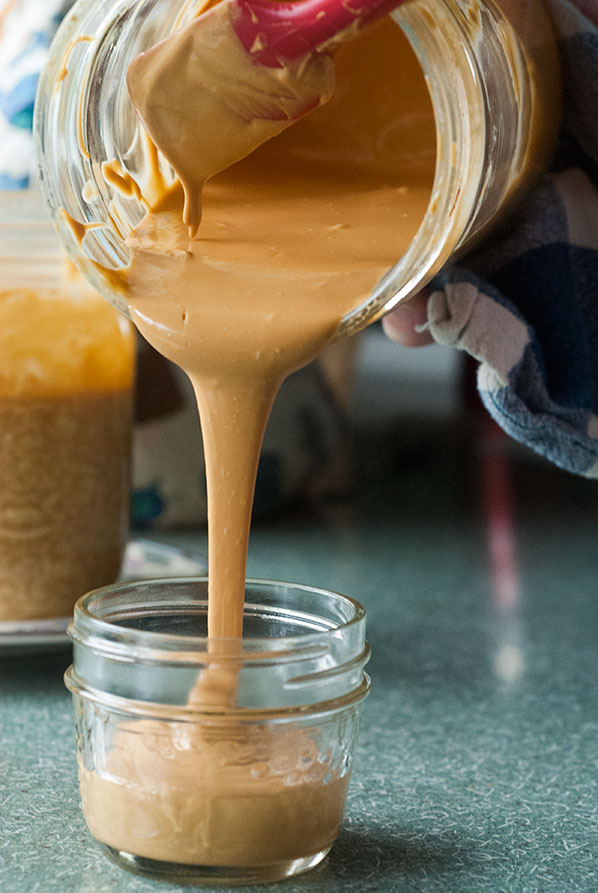 And now, I am going to attempt to temper it.

This is probably not going to be as easy as it sounds.  I know it has taken Valrhona eight years to come up with a stable recipe for their Dulcey blonde chocolate.  But, I am not a highly regarded chocolate company with an international reputation to protect, who is going to be marketing this chocolate to the world and needs it to be stable and consistent– I just want to see if I can turn it into a couple of bars.

I gently heat the mass of caramelized chocolate (about 350 grams) until I can scrape it out of the mason jar and into my favorite (for tempering chocolate) glass bowl, which can go from microwave oven to bain marie.  I heat the chocolate on half power in the microwave oven until it registers 45 degrees Celsius on my wonderfully accurate Thermapen thermometer (one of the few high-priced, but oh-so worth it investments I have made in chocolate making supplies.

Since I have no already tempered “seed” chocolate, I pour two thirds of the mass onto a marble slab and tablier it.  I am surprised at how thick and “sluggish” the mass is, even to begin with, and am a little worried that I won’t feel a “pull” on the chocolate as it begins to cool.  Normally, with tabliering, you can feel a noticeable “pull” on the chocolate as  the temperature drops and you drag a scraper through it.

The mass is not large and I do feel a noticeable pull in a few minutes.  I scrape it up – it is very thick – and back into the glass bowl.  Stirring the whole mass, and trying not to incorporate in any air bubbles, I stir until the temperature reaches 29 degrees Celsius on the Thermapen.  This only takes a couple of minutes.  I put the chocolate back into the microwave oven on half power for a couple of 30 second “blasts”, until the temperature has crept back up to 32 degrees Celsius.

Now, hoping the chocolate is in temper (it fells very thick/viscous), I pour some of it into thin flexible chocolate bar molds, and push golden raisins and toasted whole almonds into the backs. 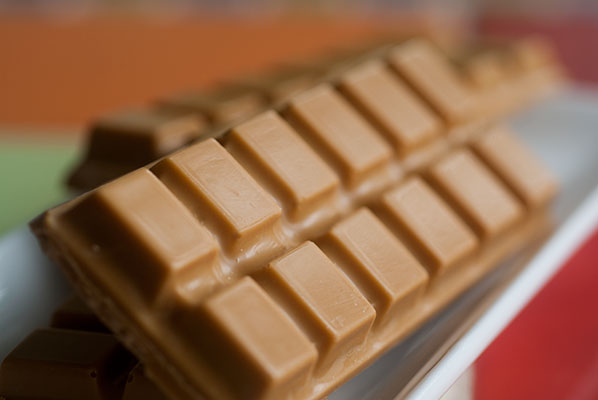 I put the bar molds to cool on my thinner, portable marble slab and move them to a quiet, cat-free, high-up corner of the kitchen. Last year I had the painful experience of having a slabful of molded chocolates cooling on the table,  jumped on by Small Girl Cat, while being pursued by Big Guy … I am more careful now.

The multiple marble slabs are the other expense which has been worth it.  I use the large slab for tabliering and two smaller, thinner ones for cooling and moving things around the kitchen.

I pour the remaining caramelized chocolate in a pool onto a Silpat mat and leave it to harden to a golden brown mass.

The next day, I temper some milk chocolate, and pour it into a polycarbonate mold to create shells for a ganache I will make with the remaining caramelized chocolate and heavy cream.

I have much higher hopes for this light, caramelly milk chocolate, however.

I break up the caramelized chocolate, weigh it and heat it on half-power in the microwave oven, until almost melted.  I stir, trying not to incorporate any air into it, as I heat the heavy cream.

I used the ratio of 2 parts chocolate to 1 part cream, as I am treating this as a white chocolate.  I had 224 grams of chocolate, so I used 112ml of cream.

With small bubbles forming around the surface of the cream, I begin adding it to the chocolate, with beacoup de friction, using the technique described by Pam in the Ecole Chocolat lesson on ganache, describing the technique used by Valrhona’s kitchens:

“It is this friction that will create elasticity and the emulsion. Only when you have this elasticity will you add more cream. Adding the liquid too fast will cause the ganache to break. This initial emulsion process by hand should take about 15 – 20 minutes if done right and will go through a number of stages from paste-like to looking like it is broken to emulsified”

This is another exercise in Zen-like patience, and indeed the mixture does come together, and it is great fun to see its transformation from grainy mess to gorgeous chocolate mayonnaise.

Once this ganache has cooled to a lovely coppery mahogany mass, I pour it through a funnel, into the cavities in the mold, and bang the mold sharply to release any trapped air bubbles from the ganache filling.

After allowing the fillings to harden slightly, I put on the backing coat of tempered milk chocolate, and leave them to set with the bars.

The resulting chocolates, both bars and bonbons are, I think, a success. 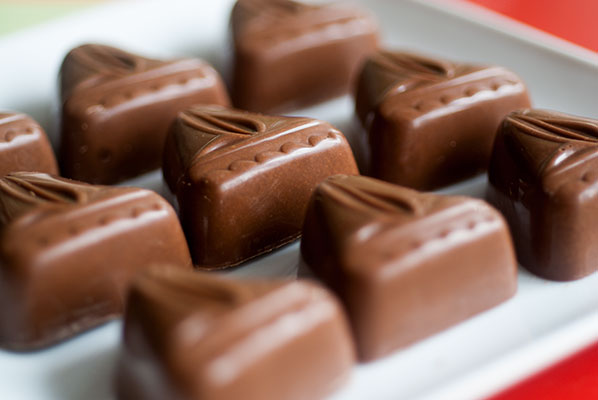 The bars are a very pretty butterscotch brown, with a decided snap (which means they tempered – yay!), and the biscuit, brown sugar taste marries with the toasty almond/golden raisins. A good bar to take on a hike.  The taste makes me think of baked desserts – kind of homey and brown sugary, with much more complexity than straight up white chocolate.  I will be making these again.

And the milk chocolate/caramelized chocolate ganache filled sailboats remind me of butterscotch and caramel (almost like a silky, not cloyingly sweet Caramilk bar), vanilla fudge and salted caramel.

A little of this caramelized chocolate goes a long way, and I don’t know if it will ever replace good dark chocolate in my affections, but it is a great companion taste and I will be thinking of other ways to use it in the weeks to come. 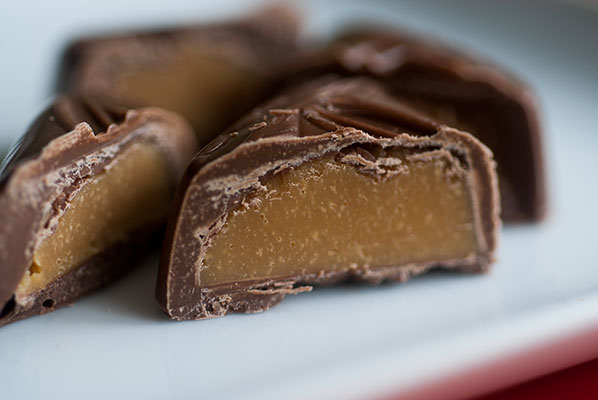 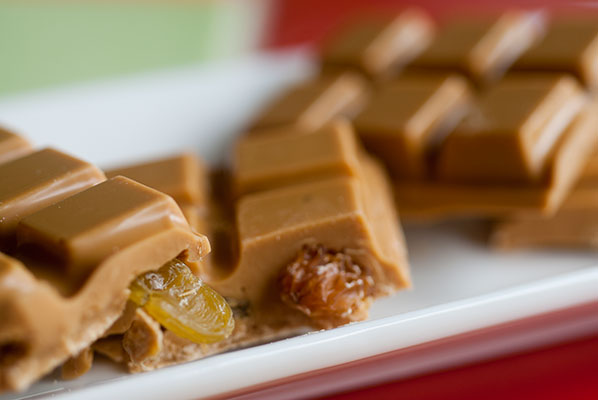