Today is Remembrance Day here in Canada. Our coats are sporting the poppies I remember from childhood, sponsored by the Royal Canadian Legion – I don’t think the poppies have changed in all the years I can remember, and the challenge is always to get them to stay on your coat without poking you, or falling off.

Part of the fondness I have for this ritual is buying the poppy from the veteran who is more than happy to patiently guide you through the technique for poking the pin back through the poppy itself.  When I was a child, we often resorted to a chunk of eraser stuck on the end of the pin – it works, but can look a little undignified.

This is also the opportunity to engage the veteran in conversation about their experiences, and to listen, without interrupting.  The poppies, of course, are a traditional Remembrance Day flower, being the first ones to re-appear amidst the graves “row on row” in the disturbed soil of the gory battlegrounds of the First World War.

According to this article:

“During the tremendous bombardments of the First World War the chalk soils became rich in lime from rubble, allowing ‘popaver rhoeas’ to thrive. When the war ended the lime was quickly absorbed, and the poppy began to disappear again.”

The image of these poppies was made famous by the Canadian physician and poet, Lieutenant Colonel John McRae in his poem, written during the Battle of Ypres in 1915:  In Flanders Fields.

An even older symbol of love and remembrance is the herb, rosemary. 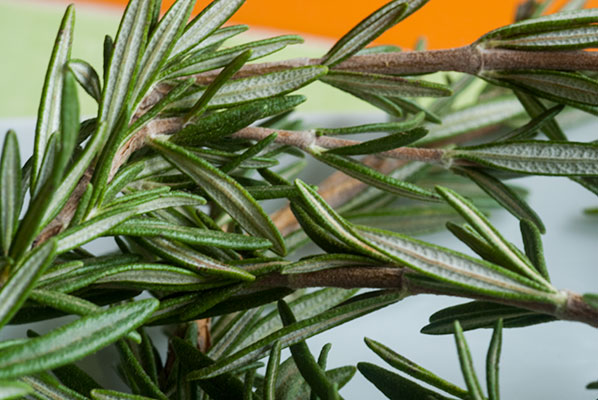 Native to seaside regions of the Mediterranean and North Africa, the Latin name Rosemarinus means dew of the sea. From Wikipedia:

Rosmarinus officinalis, commonly known as rosemary, is a woody, perennial herb with fragrant, evergreen, needle-like leaves and white, pink, purple, or blue flowers, native to the Mediterranean region. It is a member of the mint family Lamiaceae, which includes many other herbs. The name “rosemary” derives from the Latin for “dew” (ros) and “sea” (marinus), or “dew of the sea”, because in many locations, it needs no water other than the humidity carried by the sea breeze to live. The plant is also sometimes called anthos, from the ancient Greek word ἄνθος, meaning “flower”.

This plant was, in ancient times, supposed to strengthen memory. Greek scholars wore rosemary in their hair to help remember their studies, and the association with remembrance has carried through to modern times. In literature and folklore it is an emblem of remembrance.

Sir Thomas More said about rosemary:
“It is the herb sacred to remembrance and, therefore, to friendship; whence a sprig of it hath a dumb language that maketh it the chosen emblem of our funeral wakes and in our buriall grounds.

Also according to Wikipedia:

“Rosemary has a very old reputation for improving memory and has been used as a symbol for remembrance during weddings, war commemorations and funerals in Europe and Australia. Mourners would throw it into graves as a symbol of remembrance for the dead.”

A modern study lends some credence to this reputation. When the smell of rosemary was pumped into cubicles where people were working, they showed improved memory, though with slower recall.

Rosemary is worn on coat lapels, pinned to the breast or held in place by medals on Anzac Day and Remembrance Day in New Zealand and Australia.  This is especially poignant, as rosemary grows wild on the Gallipoli Peninsula – the landing site of one of the most brutal battles of World War One, where many Australian and New Zealander’s lives were lost.

So, in honour of love and remembrance, for this Remembrance Day, I am making some rosemary infused ganache truffles.

I recently encountered the combination of chocolate and rosemary in a delightfully “different” bar of Denman Island Chocolate Company’s, called Rosemary, Baby and its very honest tagline is, “tastes like a walk in the forest – not for everyone”

While it may not be for everyone (and I can attest that this bar was the least favorite of a group of teenaged friends) I loved it. 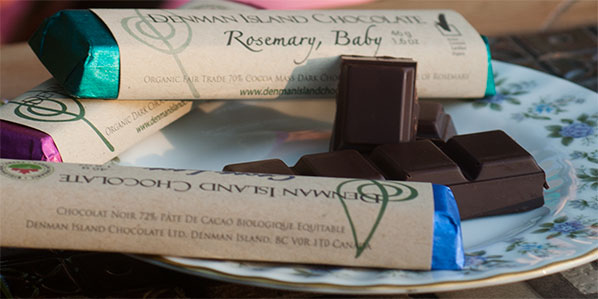 Rosemary grows plentifully in our garden (although its origins are in the Mediterranean region), so it is a simple matter to go out to the planter boxes and take:

Rosemary, like many pungent herbs should be used sparingly, so resist the temptation to throw in a whole handful, which could make the ganache very bitter.

At this point, the centres can either be rolled in unsweetened cocoa, or enrobed in tempered chocolate.  If enrobing, keep the truffles centres refrigerated until just before dipping them in the chocolate, as they do tend to soften quickly.

And may I wish everyone a thoughtful and memory-filled Remembrance Day. 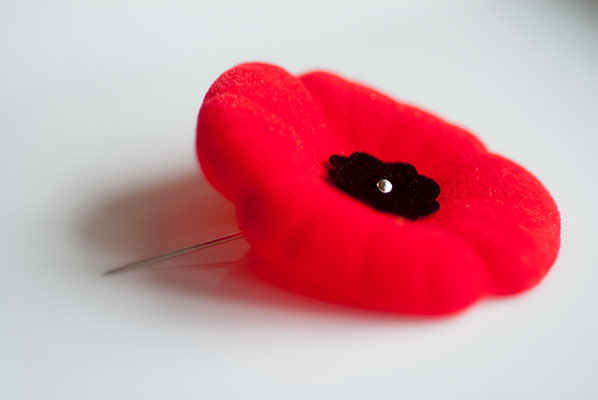