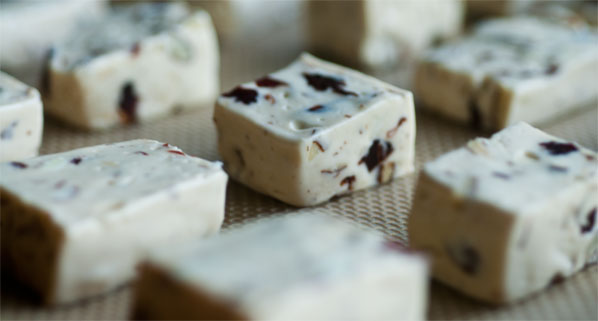 When I was a kid, I used to absolutely love a strange, weirdly white sticky confection filled with gooey blobs of … I am not sure what – I think, perhaps ju-jube, but they were brightly coloured, in bar form and called, imperiously Roman Nougat.

It was and still is made by the Ganong Candy Company of St. Stephen, New Brunswick, a family owned company, now into its fourth generation of proprietors.  There is even a Ganong museum in St. Stephen, which would be great fun to visit, one day – as they are also the originator of another weirdly wonderful confection:  chicken bones – a hard cinnamon candy, which you suck until the outside coating splinters in your mouth, and your tongue makes contact with the chocolate centre.

Roman Nougat is an extremely distant cousin (perhaps illegitimate cousin) of the Italian torrone or nougat, made with honey and almonds, traditionally from Italy and France.  From Wikipedia:

Nougat is a variety of similar traditional confectioneries made with sugar and/or honey, toasted nuts (almonds, walnuts, pistachios, hazelnuts, and recently macadamia nuts are common), whipped egg whites, and sometimes chopped candied fruit. The consistency of nougat can range from soft and chewy to hard and crunchy depending on its composition, and it is used in a variety of candy bars and chocolates. The word nougat comes from Occitan pan nogat which means nutbread.

There are three basic kinds of nougat: The first, and most common, is white nougat (which appeared in Cremona, Italy in the early 15th century and later in Montélimar, France, in the 18th century) which is made with beaten egg whites and honey. The second is brown nougat (referred to as “mandorlato” in Italy and nougatine in French) which is made without egg whites and has a firmer, often crunchy texture. The third is the Viennese or German nougat which is essentially a chocolate and nut (usually hazelnut) praline.

This week, I went way back into the Ecole Chocolate professional chocolate making course curriculum, and the section on various centres for bon bons, and realized with shock and delight that I had neglected to ever make any nougat.

And since it is cherry season – I am usually a cherry hater, but I have some exceptionally fine dried cherries and organic almonds – I am spending the afternoon up to my elbows in a sticky situation.

What care I if every cookbook and recipe advises that the best time to make nougat is on a clear day, with low humidity? What care I that we are threatened with precipitation nearly every day, this summer? If I waited for Environment Canada to tell me the day is guaranteed to be sunny and warm, I would never even risk hanging out a load of laundry.  Hah.  I have made meringue on a rainy day.  I live in a rainforest. I am fearless.

Because of my penchant for that long ago candy bar, I am going to make the white version of nougat, and enrobe the pieces in dark chocolate.

The recipe I worked from is here.  Emeril Lagasse’s Toasted Almond and Dried Cherry Nougat.

I read and re-read the recipe, taking note of its timing and steps, readying my ingredients, and having everything mise en place, before beginning.  Every nougat recipe I have read mentions how important timing is, as you are required to have mixers beating egg whites at the same time as you are gently raising the temperature of a sugar syrup to its exact degree of readiness.  For this purpose, I did not use my wonderful instant read thermometer (my best friend for tempering chocolate), but reverted to my old pal, a bulb candy thermometer, so that I could watch the gradual, then sudden, rise of the syrup’s temperature.

I made sure to generously butter the pan in which the candy would be setting.  Speaking of butter, it did seem that a whole lot was used in this recipe – 8ounces/225 grams – which may have accounted for what happened when I unmolded it, the next day.

It came out of the pan easily and I was able to cut the mass into pretty rectangular pieces.  Satisfied that they looked good, studded with almonds and chunks of cherry, I set to work tempering the chocolate to enrobe them.

By the time I turned back to the nougat, they had (there is no other word for it) oozed together, and were threatening to ooze off the Silpat mat. 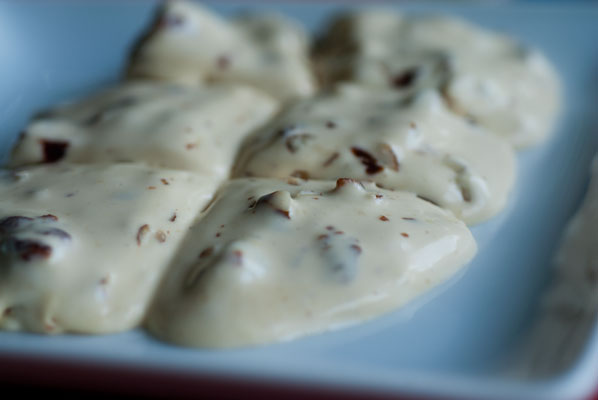 I hastily rolled up the flattened blobs into three cylinders, and re-cut them, then got distracted, having a lovely conversation with Elder Son.  By the time I turned back, they had oozed spectacularly, again.

The texture of the oozing nougat reminded me of Silly Putty.  It was a good deal softer than I was prepared for, but very easy to knead back into the shape I wanted.  It just wouldn’t stay that way.

As I have produced a good many batches of too-soft ganache, I took a deep breath, decided this would get the same treatment, popped this whole lot back into the pan, and into the refrigerator, to firm up.

It worked like a charm, and I was once again able to get the size and shape of pieces I wanted to enrobe, but this time, put them back into the refrigerator until quite ready to pop into the chocolate. 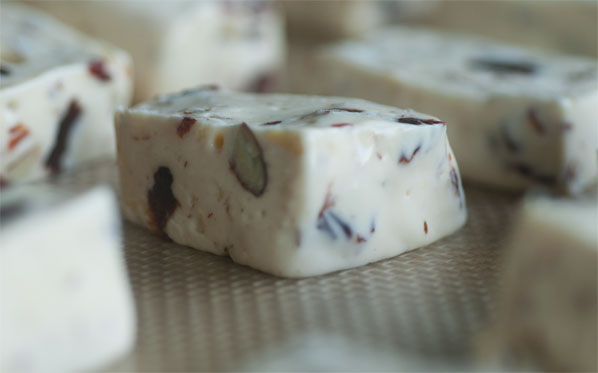 It reminded me of the day I made the chaotic-looking (think Jackson Pollock), but delicious too-soft-in-the-centre Earl Grey truffles (described in Highly Descriptive Chocolates).

I got out my wonderful enrobing “cheat-ar”, set up my enrobing station, and as soon as I had the chocolate in temper, got to work on the nougat rectangles.

Running back and forth to the refrigerator for chunks of nougat, I manage to get half of the batch enrobed (I leave the other half “naked” for those who do not like chocolate – yes, I do have friends in that camp). 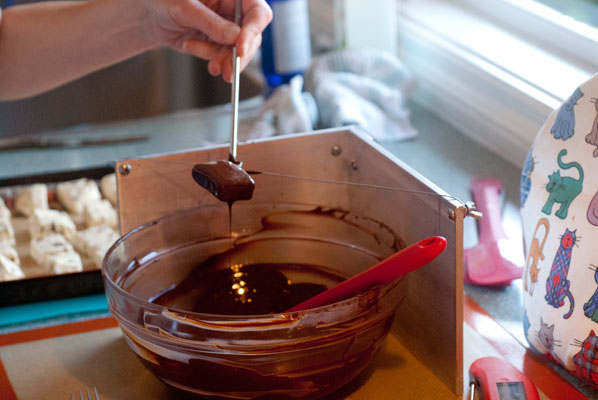 They look very pretty when cut, revealing their studded interiors, and melt satisfyingly in the mouth, rather than being overly chewy.

The combination of dried cherry, toasted almond, and white nougat combined with good dark chocolate is, I would say, just right.

I notice that M. Lagasse recommends wrapping each piece in waxed paper immediately after cutting – he did not enrobe his – but I still think I will keep those pieces chilled until ready to be consumed, especially in this balmy summer weather.

Hmm, perhaps next week, I will have a go at brown nougat – the much crunchier cousin of this, the lovely gooey delicious Silly Putty version of nougat. 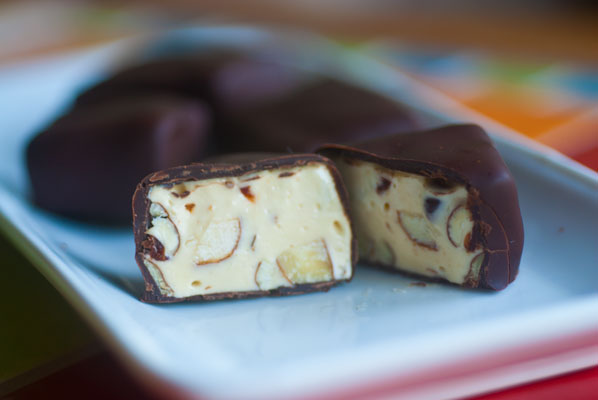