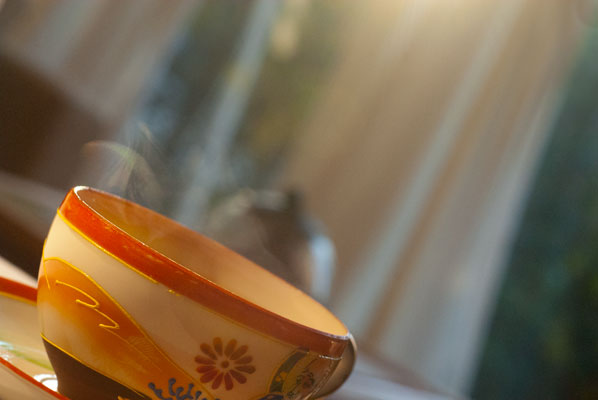 “Meanwhile, let us have a sip of tea…let us dream of evanescence and linger in the beautiful foolishness of things.”

“The Book of Tea” by Okakura Kakuzo

I absolutely concur with this very wise author.  There are few things in life more conducive to dreaming and lingering than a hot cup of tea.  I don’t know whether it is the steam, the aroma of the infusion or the whole process of concocting a cup of it, but I do love the focus and commitment it takes to do it properly.  I am not one of those who believe you can call plopping a bag in a cup and dumping hot water on top (or worse yet, adding a tea bag INTO the cooling water) to be actually brewing tea – call me a snob if you will.

The only thing that can elevate the whole ceremony one more notch is to include chocolate.

About a month ago, I spent a lovely couple of days trying out various infusions of cream, for a batch of ganache truffles, and by far the tastiest and most successful of that experiment was the Earl Grey tea infused truffles.  This week, I am turning things around.

The idea for this week’s post began when a friend of mine was telling me about a special tea she had been given called Chocolate Rocket.  She wasn’t sure what was in it, but said it was divine.  I knew I had to find out.

As it turns out, Chocolate Rocket is the name of one of the 120 different types of teas I was able to procure from David’s Tea, in Vancouver’s Kitsilano neighbourhood.

And while this is not a chocolate shop, and while there are other wonderful tea shops in Vancouver (one of them owned by a dear friend who will forgive me, I know), I must confess, I went a bit crazy and walked out of David’s with eight different kinds of chocolate tea.

There is an atmosphere of great fun at David’s, and since 2008, when they opened their first store in Toronto, Ontario, they have expanded all over Canada and into the United States.

“At DAVID’S TEA, we love bringing you the greatest loose-leaf teas and ingredients from around the world. Our teas range from traditional straight teas to our exclusive blends and unique flavours. Our ongoing quest for the highest quality and most innovative blends doesn’t stop with tea leaves—we seek out the best spices, fruits, nuts, and herbs from every corner of the world. Our teas are fun, but our dedication is serious”

So, now I had my work cut out for me.

Tea is as complex as chocolate, and the ingredients involved in the differing blends result in very different tastes, and, as with the incredibly delicious sounding truffle and bon bon flavours I have sampled, it is a constant surprise and a testament to the alchemy of the brewing process, that the flavours can be so radically different, in some cases delightful, in others … well, let’s just say I couldn’t wash the taste away quickly enough!

Here is my completely subjective sampling:

I started with the black teas, my comfort zone, the type of tea on which I was raised (brewed very strong in a Brown Betty teapot).  Black tea leaves keep their flavour far longer than more delicate types, and it is partly for this reason that black tea has been so valuable as a trading commodity.  It is more oxidized than other types, with stronger flavour and a higher caffeine content, giving it its “brisk” taste.  An excellent explanation of the steps of tea processing can be found here.

Read My lips was definitely my favorite of this family.  China black tea, vanilla, peppermint, chocolate bits, spicy red peppercorns and little red candy lips.  Orange/red in appearance, it is like drinking a peppermint chocolate (Junior Mints spring to mind), with a tasty hit of citrus, to follow.  I drank the entire cup, with help from my husband and even our younger son, who does not like peppermint, loved the aroma of this one.  I wrote:  “I LOVE IT!” on my tasting notes.

Love Tea #7 smells like a chocolate strawberry cream, but I’d have to say this is its strongest component, as it brews up to produce a very light fruitiness, pleasant, sweet, but a bit insipid for my liking.  I could not taste the rose petals which are part of its blend, at all

Chocolate Chili Chai brews up to a golden amber, with a faint chocolate aroma.  Not nearly as “fiery” as I was expecting – it is a blend of black tea, chocolate and chili peppers – it actually left a slight soapy aftertaste, very slight, but not the hit of chili I was hoping for

Next, a Green Tea, with the addition of Rooibos.  A South African friend first introduced me to Rooibos, and I wanted to like it so much, as it contains no caffeine and is purported to contain a bunch of other great stuff, according to Wikipedia:

Nutritional and health benefits
Rooibos is becoming more popular in Western countries, particularly among health-conscious consumers, due to its high level of antioxidants such as aspalathin and nothofagin, its lack of caffeine, and its low tannin levels compared to fully oxidized black tea or unoxidized green tea leaves.  Rooibos also contains a number of phenolic compounds, including flavanols, flavones, flavanones, and dihydrochalcones.

Rooibos is purported to assist with nervous tension, allergies and digestive problems.

Two rooibos flavonoids, quercetin and luteolin have been known to have cancer fighting qualities. Also, rooibos is one of only a handful of plants in the world to contain EGCG epigallocatechin-3-gallate, a potent antioxidant which can decrease heart disease risk.

I must confess that I find rooibos to be sickly sweet, sort of like drinking warm Kool-Aid.

So, perhaps it is not really surprising that I didn’t care for Super Chocolate, although I usually love green teas.  It brews up with a sweet, honeyish aroma, a light golden amber colour, but the taste – well, to my taste it is a bit too candy-like, followed by a pleasant hit of green.  I cannot perceive the cinnamon which is part of this tea, but it is “not bad for a rooibos”.  I perceived no chocolate taste, whatsoever.

I love the word Oolong (which means Black Dragon Tea) and am looking forward to Dr. Chocolate.  Oolong tea is great fun to watch as it infuses, because the leaves unroll and spread themselves out, much, I suppose as a dragon does when it is waking up.

“produced through a unique process including withering under the strong sun and oxidation before curling and twisting.”

“Different varieties of oolong are processed differently, but the leaves are formed into one of two distinct styles. Some are rolled into long curly leaves, while others are ‘wrap-curled’ into small beads, each with a tail. The former style is the more traditional of the two.”

This tea is a very light butterscotch colour, when brewed, and the aroma reminds me of church incense (oddly enough, quite pleasantly so).  It unfurls luxuriously, like a stretching cat, revealing fat green cardamom pods.  It has a spicy, light cardamom flavour, with very little chocolate taste, but is a nice refreshing brew.  I could imagine sipping it, while trying to write, as it doesn’t demand attention – just kind of pleasantly scents the background.

Chocolate Rocket.  This is a mate which, according to Wikipedia:

“also known as chimarrão or cimarrón, is a traditional South American infused drink, particularly in Argentina, Uruguay, Paraguay, southern states of Brazil, south of Chile, the Bolivian Chaco, and to some extent, Syria and Lebanon. It is prepared from steeping dried leaves of yerba maté in hot water.”

And according to the David’s Tea description:

“This South American super-herb is packed with energy.  It’ll keep you up and running as long as you like, and it pairs amazingly well with nuts, chocolate and all kinds of other flavours.  Sweet, toasty, smoky and smooth, it never bitters and never gets old.”

Well, as I mentioned earlier, this was the tea that started me off on this post, and I wanted another opinion on it, so I asked a wise and respected friend (also a chocolate and tea lover) to sample it.

I’ve had regular mates, and find them quite palatable, but my friend’s take on this one was as follows:

“It had a nice aroma, when I opened the package, but when I brewed it, exactly as the package requested, I can only say it reminded me of when you make hot chocolate with water instead of milk – except with half the amount of chocolate taste.  I couldn’t taste any raspberry or almond, it was insipid, and I have to say, I just don’t think chocolate and tea go together.”

Hmm, once again I am struck by how diverse people’s likes and dislikes can be.  My other, wise friend absolutely loves this one, and I know it is one of their most popular. 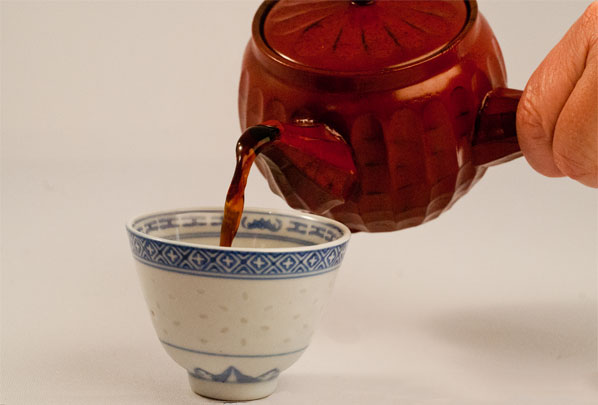 I had never heard of Pu’erh tea, named for Pu’erh County, which was a trading post for tea in Imperial China.  I love the description of it as “one of those rarities that collectors go mad for and, like a fine wine, it only gets better with age”

The two teas I sampled from this family couldn’t have provided stronger taste reactions.

Oh dear.  Coffee Pu’erh is not going to be on my list of favorites.  As soon as I open the bag, I am hit with a “flavoured coffee” aroma.  This one does, in fact, have whole coffee beans in the mix, and brews up a dark coffee colour.  It has a strong roasted aroma, and, to my palate, a stewed flavoured coffee taste (and I did follow the brewing instructions implicitly).  I taste no chocolate or caramel (which is listed as one of the ingredients), and really, just find this one unpleasant.  I would be very interested to know if other people and their palates are tasting something I am not.  This one gets the “yuck” rating.

I am so glad I did not judge all Pu’erhs based upon my reaction to the blend just mentioned.

From the first whiff of the opened bag, Oh Christmas Treat fills the back of the palate with the pungent scent of Terry’s Chocolate Orange.  It does not disappoint upon tasting.  This made such a satisfying cup, a lovely blend of dark chocolate flavour and unapologetically orange.  Rich and Christmassy and a delicious, almost chewy mouthful.  Orange after-taste.  I will be buying some of this for stocking stuffers.

As a confirmed (although not always well-versed) tea lover, this has been an interesting exploration and education.

I am left with a few “nice but not in a chocolate way”, a couple of “no way” blends, and two that I think will become seasonal favorites.  And a renewed respect for the artistry and alchemy of putting together appealing flavours and aromas.

And now, I think I will brew myself a pot of Orange Pekoe, to go with the chocolate cake the boys have just pulled from the oven.

Perhaps, I’m not such a snob, after all. 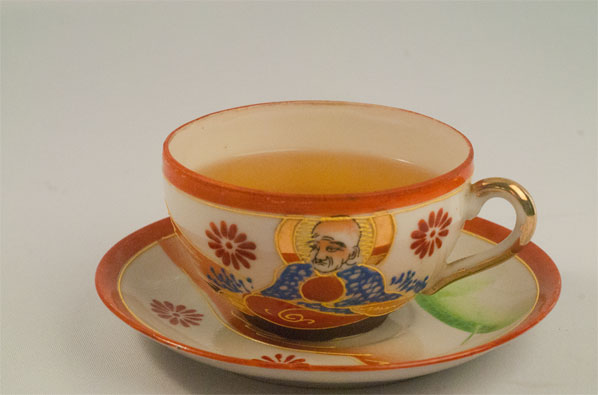