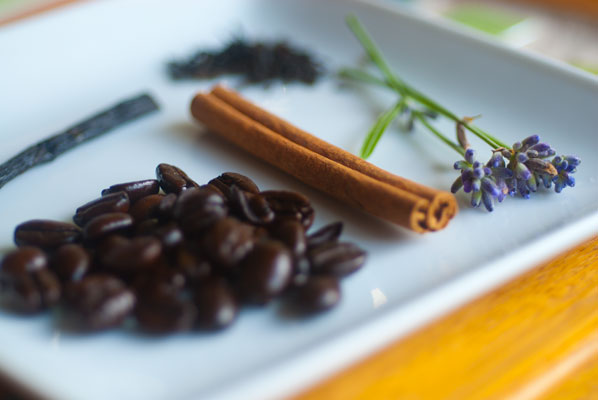 Maybe it is because I love a really good cup of tea or maybe because I have been enjoying the zen-like satisfaction of ganache making, but I have been spending this week immersed in infusions.

An infusion, according to Wikipedia is:

A very simple chemical process used with herbs that dissolve readily in water, or release their active ingredients easily in oil. Boiling water (or water of the appropriate temperature) is poured over the herb and allowed to steep for a time. The amount of time the herbs are left in the water depends on what purpose the liquid is being prepared for.

Dried herbs or other plants can be placed in boiled water for a few minutes, then discarded, and the water drunk as a beverage. A common example is tea.

Plants with desirable flavours may be steeped in an edible oil or vinegar for an extended period.

Well, my liquid of choice has been neither water nor oil, but good fresh dairy cream, into which I have been chucking all kinds of aromatic things, then mixing them with chocolate.

Our garden has been bravely offering up its last hurrah of bounty, before the cold really sets in, and I made a pilgrimage out to the front yard garden, early this week, on a beautiful crisp fall morning, to harvest the last (sniff!) of our delicate purple lavender. 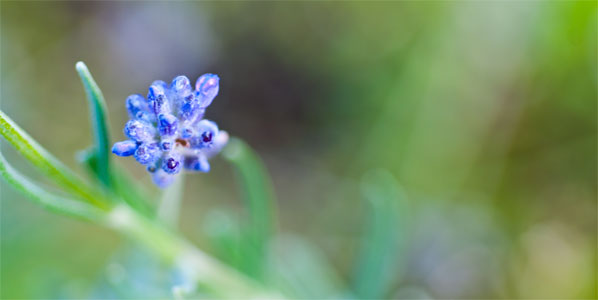 I adore lavender for its lovely calming scent, and always have a little bottle of essential oil of lavender in my purse, to fight off headaches.

I use it to scent the home-made laundry soap and facial scrub I am partial to concocting, and I rub it into my hands in lotion.

Apparently, nurses used lavender to bather soldiers’ wounds in the First World War, and it was commonly used in Roman baths to scent the water, and restore the skin

I have enjoyed eating it in shortbread, and first sampled it with chocolate and dried blueberries, in a scrumptious bar made by Dagoba.

So my first infusion of the week is an obvious choice:  Organic Lavender infused dark chocolate ganache.

I was a little unsure as to how much lavender to use in the cream, as I’d decided to make a small batch of ganache.  After checking on the variety of lavender we have:  Munstead (Lavandula angustifolia), and tracing the seeds back to where my partner bought them (West Coast Seeds), I discover it is slightly stronger in flavour than most English lavenders.  I decide to go with six tiny bloom heads, which translates into ½ Tablespoon of buds.

I carefully remove the buds from the stems and, pressing them ever so slightly, drop them into ½ cup (250 ml) of heavy cream.  I then leave this, covered, in the refrigerator overnight. 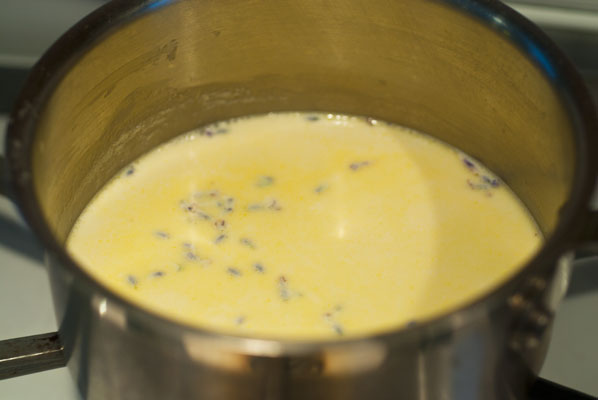 The next day, I chop up 4 ounces (143.5 gms) of bittersweet chocolate, and melt it (50% power) gently in the microwave, while bringing the cream and lavender to a bare simmer, then leaving them to infuse for 10 minutes.

I go through the ganache making steps carefully, straining out the lavender, pressing slightly on the wet buds, in five additions of hot cream, with plenty of stirring, to make a smooth emulsification. 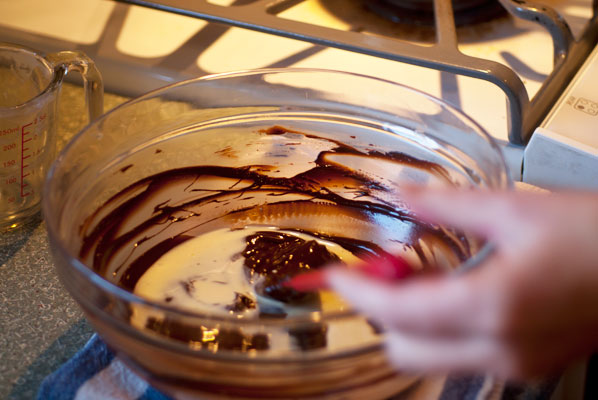 As I stir, I can smell the aroma of lavender, and I cannot resist.  As I put the ganache aside, in a clean bowl, to set so that I can later scoop it into truffles, I sneak a spoonful.  It is delicate, not overpowering.  Creamy, almost citrus, and not at all bitter or overpoweringly floral.  Smooth.  This is a good balance of flavours.  Oh, I am pleased.

This time, I find a recipe on the Dilmah Tea website.  Why mess with the tea experts?

Actually, I do mess with the recipe slightly, as I do not allow the cream and small amount of butter to boil, but bring it to a gentle simmer, and allow the tea (I have used Herbal Republic’s Organic Earl Grey) to steep for ten minutes. 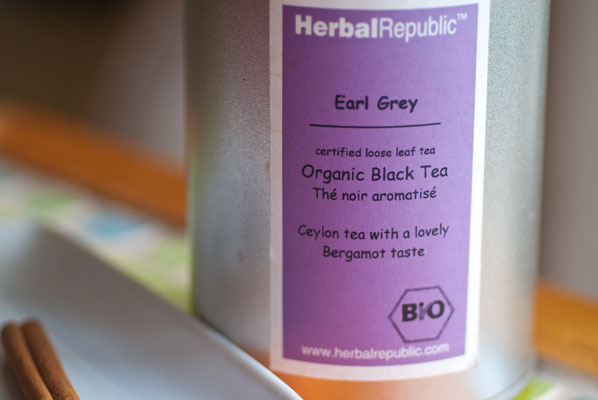 I love Earl Grey tea, especially when I am teaching, or in a long rehearsal, as its aroma is stimulating and helps get the creative juices flowing.  I drink it clear, unlike the black Tetley’s cuppa I enjoy with milk, as comfort drink, at night.

The charm and distinctive personality of Earl Grey tea comes from oil of bergamot.  This bergamot is not the plant from the mint family, of the same name, but is, according to Wikipedia:

“Citrus bergamia is a small tree which blossoms during the winter. The juice tastes less sour than lemon, but more bitter than grapefruit. The distinctive aroma of the bergamot is most commonly known for its use in Earl Grey tea. The juice of the fruit has also been used in Calabrian indigenous medicine to treat malaria, and its essential oil is popular in aromatherapy applications.

An essence extracted from the aromatic skin of this sour fruit is used to flavour Earl Grey and Lady Grey teas, and confectionery.  The actual fruit of the bergamot orange itself is not known to be edible.”

The herbs which we see in North America, Monarda didyma and Monarda fistulosa  are called bergamot, because of their similar aroma. 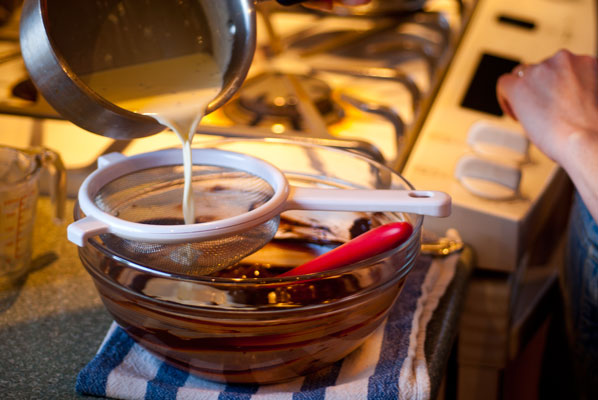 Bergamot, like lavender, is used in all sorts of skin care products, and is said to have some medicinal properties … but I just love the way it smells!

The citrusy flavour transfers well to the ganache, and I am glad I have used bittersweet chocolate with it, as it compliments, rather than overpowering the chocolate flavour.

I roll this batch of ganache into truffles, coating them with Ghirardelli natural cocoa, for a ruddy look (I love Ghirardelli’s colour – like terra cotta), but place them into a sieve to roll around and shake off the excess, as I don’t want too much cocoa to mask the delicate bergamot taste.  This gives the truffles a “checkerboard pattern” which reminds me of the butter balls my Mum used to make with her old fashioned wooden butter “hands”. 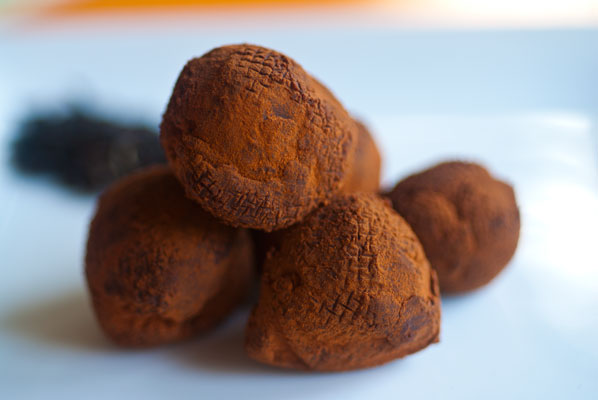 I am loving this perfect excuse to stay inside today – it is “chucking it down” with rain, outside – and move on to infused ganache, flavour number three:  Organic coffee, Tahitian vanilla bean, cinnamon stick infused milk chocolate ganache.

I have to have at least one made with milk chocolate, and this seems like a good combination to me.

I decide to “wing it” and, to one cup (250 ml) of heavy cream, I add a 3 inch piece of cinnamon stick, a 3 inch piece of Tahitian vanilla bean, and two tablespoons of Kicking Horse Coffee’s Kick Ass dark roast whole bean coffee. 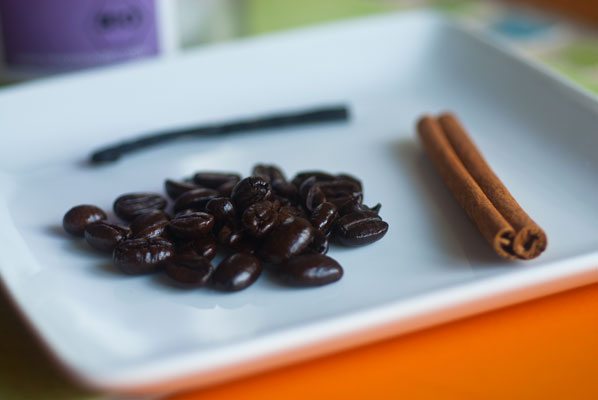 As I am using milk chocolate for this ganache, I adjust the amount of chocolate accordingly, and chop up 12 ounces, for a 1.5/1 ratio of chocolate/cream (thank you, Ecole Chocolat!)

I love the caramelly taste of this Callebaut milk chocolate, and although I have a few moments of terror as the first addition of strained, infused cream turns the chocolate into a grainy stiff mess, I remember the excellent, calming ganache technique lessons from Ecole Chocolat, and forge on, adding the cream in tiny amounts, only after beacoup de friction (much stirring), from the centre of the bowl, outward, keeping the spatula in the mass, to keep air bubbles from forming.

This time, my results are definitely thinner, more liquid, but I remember that a milk or white chocolate ganache will take a greater amount of time to crystallize, than will the dark. 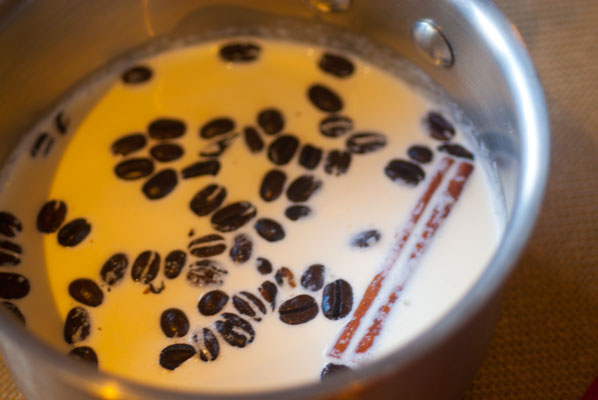 I use this opportunity to haul out my flexible plastic molds and, once the milk chocolate ganache is at room temperature, pour it into the molds to set.

I will use the unmolded ganache later, I promise myself, for practice in enrobing … because I need it!

Of course, I have at least two teaspoons of the ganache leftover on the spoons, and I casually wander upstairs, feeling like Juliet Binoche in Chocolat. I hold a spoonful of the ganache to my partner’s lips for tasting.  The results are very gratifying, manifested as a series of “Mmms”.

This one tastes, to me, like a really good Mexican mocha hot chocolate.  I am actually surprised how well the flavours of milk chocolate and coffee go together. But it works.

Now, I know it is hard to go wrong with a combination of cream, chocolate and flavouring, but I have had, in the past, some Epic Fails.  Flavours I thought would be delicious, have proved me spectacularly wrong.

Perhaps it is the process of infusion, itself.  There seems to me to be a built in control – like when you brew a cup of tea.  You can regulate the strength of the infusion through several factors, including time.  Infusing something also enables you to use that all-important organ – your nose – to determine readiness, to a degree.

And for me, the infusion process holds the appeal of alchemy.  You are never quite sure, when all those elements of quantity, heat, length of steeping time, butterfat content, freshness of cream, come into play together, what you are going to get at the end, but today at least, it has resulted in an aromatic and delicious trio of velvety goodness.

Ah yes, a couple of truffles will just hit the spot.  The perfect accompaniment to a good cup of tea. 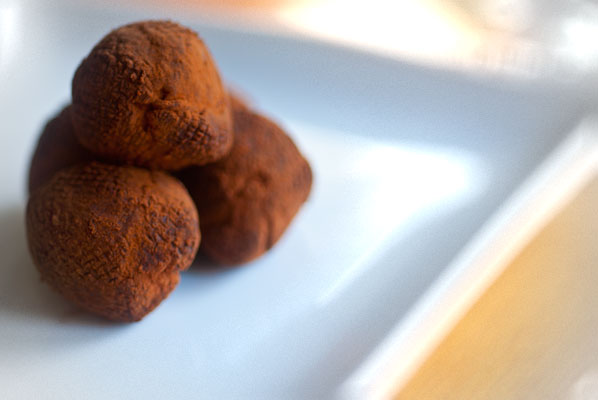