It’s hot, it’s dark, and it slips down my throat like liquid satin.  I have just consumed a very thick, very small cup of the classic, thick hot chocolate of Barcelona.

The other day I discovered the exquisite little single serving packets, made by Soma, a Toronto  based chocolatier, of this very special hot chocolate.  The one I have just consumed is called A LA TAZA.  They also have, among others, a malted milk flavour, which, okay I confess it, I wolfed down just prior to the one I have described.   It had a smooth, mild caramelly flavour, and it slipped down so quickly and easily, I had to have more.

Almost the consistency of pudding (I did use a spoon to scrape out the cup), and spiced with vanilla, cinnamon and allspice, this cup of Spanish chocolate heaven is the closest I will get to visiting a sun-baked country, during this rainy, busy Vancouver winter.
I close my eyes and, as the warmth of the chocolate reaches the tips of my cold fingers, try to imagine the insightful culture that first had the brilliant idea to consume this heavenly stuff.

“The first chocolate beverage is believed to have been created by the Mayan peoples around 2,000 years ago, and a cocoa beverage was an essential part of Aztec culture by 1400 AD.”

“To make the chocolate drink, which was served cold, the Maya ground cocoa seeds into a paste, and mixed it with water, cornmeal, chile peppers, and other ingredients. They then poured the drink back and forth from a cup to a pot, until a thick foam developed.”

“The Aztec adaptation of the drink was a bitter, frothy, spicy drink called xocolatl. It was often seasoned with vanilla, chile pepper, and achiote and was believed to fight fatigue.”

Although I cannot lay claim to any Mayan or Aztec ancestry, I am very grateful to them, and feel a bond of comradeship, as their labour-intensive process for making this beverage reminds me of my first frustrating attempts to make hot chocolate, as a child.

It was one of the first things I learned how to make for myself.   I grew up in a home with parents who had emigrated from Britain, who had lived with rationing, and in my family, most things were made from scratch.  This was no exception … except I didn’t know that at the time.

For my first attempt at hot chocolate making, I scrambled up into the kitchen cupboards and found the bright yellow can of Fry’s cocoa.  I didn’t know the difference between it, and the Nestle’s Quik I had seen at my friends’ homes, so I dumped a generous tablespoon of it into a glass of hot milk.  I watched fascinated, as dark brown blobs of packed-together cocoa powder rose to the top and bobbed around on the top of the liquid.

I tried smashing them down with a spoon, only to have them escape around the side to taunt me.  I tried pinching the blobs with my fingers, and while this did break them up better, it still didn’t look right.  This did not look like the wonderful, homogenized brown beverage I drank at my friend’s house.  And when I tasted it?  Ugh!  Gross!  To my untutored, 8 year old palate, I might as well have been drinking dirt.

It was only when Mum came into the kitchen and discovered my failed attempts and terrible disappointment that I learned the difference in the products.  She taught me how to make a paste of cocoa powder, sugar, and enough liquid to bind them together, and then to pour the hot milk over the paste, mixing all the time, until the whole thing held together.

It took a bit of skill, but I kept at it, for many days after school.  I finally managed to produce a smooth and sweet beverage, more chocolaty and less sweet than Quik, but when put through the blender, it developed a wonderfully satisfying foamy top.  The perfect accompaniment to cinnamon toast and homework.

Make a paste.  Pour it back and forth until a thick foam develops.  Me and the Mayans and the Aztecs.  True believers in the power of drinking chocolate.

I have only now realized that this was my first encounter with making an emulsion.  If I have been doing this since I was eight years old, I will venture into my next session of ganache making with my head held high.

I am filled with energy and good will, perhaps because of the theobromine (a mood enhancer) in the two helpings of hot chocolate I have just consumed.

“Hot chocolate was even used medicinally to treat ailments such as stomach diseases and catarrh, and to fight fatigue.”

Such a beneficial beverage.  I knew it couldn’t be just that it tastes so good.  Further tasting research is clearly indicated.  I set to work, pawing through my kitchen cupboards, and before long have managed to taste test hot chocolate made with:

CACAO – Chocolate Oaxaqueno – given to me by a friend, and clearly from Mexico.  The label and directions are entirely in Spanish, and I have great fun translating.  This is the wonderful stuff which comes in bolitas (balls), that are smashed and whipped with hot milk, with a molinillo (a Mexican turned wood whisk, which is rubbed between your palms – you can use a regular whisk, but it’s not as much fun).  Warm and spicy cinnamon flavour.  Warms up the upper palate and nasal passages.  Yummy.

Cocoa Camino Organic Dark and Milk Hot Chocolate Mixes – I have one milk chocolate loving, and one dark chocolate loving son, so I buy both of these.  They have a nice, clean chocolate flavour and are great to have for after school – although for myself, I prefer “going from scratch”, using their cocoa powder.

Nestle’s Quik – yes, we do have a can of it in the cupboard, and yes, the boys use it.  I do not.  I find it cloyingly sweet, but I do have fond memories of the first cappuccino bar I frequented (Joe’s on Commercial Drive in the heart of Little Italy in Vancouver), sprinkling Quik on top of their lattes.

Lindt Bittersweet Chocolate – I do as the Belgians do and prepare a “warme chocolade”.  It consists of a cup of steamed white milk and a small bowl of bittersweet chocolate chips to dissolve in the milk.  I highly recommend it.  The chocolate doesn’t completely mix into the milk, and that is all to its credit, in my opinion, as you get a hit of bittersweet chocolate, followed by a palate cleanser of milk.  Just remember to lick your lips frequently, as the melting chocolate has a tendency to form a moustache. 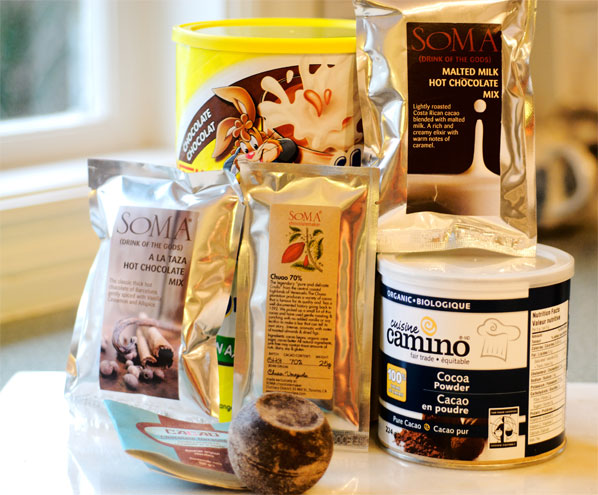 What a good thing that my sons have come home for lunch, soaking wet and cold.

How fortunate that their mother is at hand to administer a hot and frothy mug to take away the chills.

I have “done my homework” and there is no more of the lovely Soma hot chocolate to be had, but they are quite happy when I make them my childhood favourite – cocoa, sugar, hot milk, put through the blender to foam it up, and made a little bit special with a grating of really good chocolate on top.

I hope the Mayans would be proud. 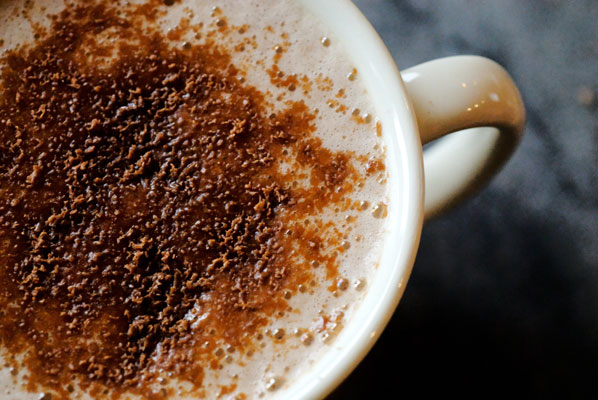