I am sure there have been many jokes made about it, by students through the ages, but my first efforts at tempering chocolate have been maddening enough to throw me into a temper tantrum!

But I guess it’s that way with any lab experiment. And this really felt like chemistry. 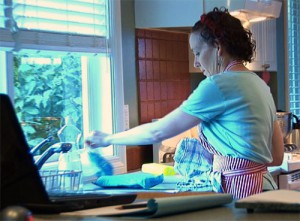 I started to prep the kitchen, as soon as the boys left for school. I figured that gave me plenty of time to have a really good go at the tabliering process, which is one of the tempering methods. Did I mention I love using all the terminology involved in chocolate-making? I have been trying to inject it in to everyday conversation, as I believe it makes me sound very clever.

I was diligent about getting the kitchen ready: scouring all my counter surfaces – the cleanest they have been in a very long time, I am chagrined to say. I had the added challenge of keeping at bay two very curious cats. The images of paw marks and feline hair in my tempered chocolate made me cringe, but they were so unnerved by the strange activity of me actually cleaning, that they avoided the kitchen for the entire morning.

I staked out the ideal spots for my marble slabs. I ended up using three of them – one for the actual tabliering process, and two more for the test samples and for surfaces on which to cool the tempered chocolate.

I felt my good fortune at living in Vancouver, in a temperate climate, where the ideal temperature of 68 degrees F. could be maintained in the kitchen, with no fear of overheating.

And most importantly, I made sure my utensils and containers were as dry as the Sahara. None of that fabulous, dark chocolate was going to seize, because of a stray water drop on a spoon, in my kitchen. I must have used a dozen tea towels laid out strategically, to catch any moisture from the bottoms of bowls. 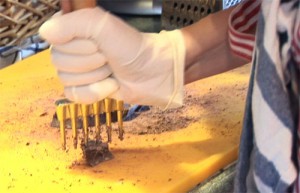 Chopping one and one half kilos of chocolate may be a meditative act for some, and I thought I was getting some sort of rhythm, just when I stabbed my pinkie finger with the chipper. I can honestly say, no blood got into that fine chocolate, so obsessed was I with not letting any moisture near it. My partner and I had the finger bandaged, bound and into a latex glove in record time. Fortunately, it was my right pinkie, and as I’m a leftie, my dexterity was not very compromised.

It was a humbling beginning: my chipping technique evolved into using my upper body weight and shoulder on the chipper, and using a rocking motion, rather than brute force, straight down. No further accidents, and I was off to the bain marie – the water bath, over which the chocolate would carefully be melted, in a stainless steel bowl. 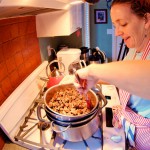 Once again, obsessed with not letting any moisture touch the chocolate, and not having a proper double boiler, I rigged up an elaborate system of: Large pot containing water, colander inside the pot, large stainless steel bowl suspended over the water, inside the colander, bowl containing chocolate inside that bowl, so I could easily lift it out. I chose the bain marie method over the microwave method, as our microwave is smelly and unpredictable at best – it’s a very popular tool in our house for heating up teenagers’ lunches – and I wanted to have constant control (hmm, is this a character trait?) of the stirring and melting process.

I loved this part. It takes a long time to carefully stir and melt 1 ½ kilos of chocolate, and you just can’t rush it. This is when you put on your favourite music, make yourself a cup of tea and, if you’re really lucky, get your partner to rub your shoulders – as long as you can do all this while stirring the pot of chocolate with one hand. 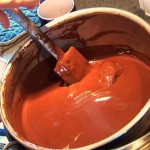 It is a feast for the senses, too. The heady aroma of melting chocolate wafting through our kitchen, the blobs of brown agitating around in the pot gradually changing into a deep, glossy, liquid pool, then, gently touching the mass, and feeling its warmth rise up through my fingers (not the stabbed finger – the other hand – I don’t want to leave anyone with a disturbing image). The time had come.

Moving from the slow and patient process of melting, I raced over to the laptop to re-read the next steps. This was one of those LESSON LEARNED times that Pam refers to so wisely, in the Ecole Chocolat lesson plans. I should have had the next steps v

ery firmly reasoned out, before attempting to tablier the chocolate, for the first time. I thought I knew what I was doing, but clearly I didn’t know why. 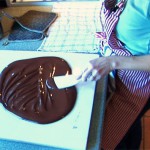 So, I blithely poured the chocolate onto the marble slab, and set about stirring it with the palette knife. I congratulated myself on learning, in advance, from one of the other students in the forum, how to prevent air bubbles from forming, and was busy admiring my stirring technique, when the chocolate very rapidly began to harden.

I shouted to my partner to quickly read out the following instructions, and he, poor fellow, attempted to do just that, accompanied by my bad-tempered, “No, no, not that bit – the NEXT part!”

Needless to say, the chocolate cooled too quickly for me to get it into the bowl, where I was supposed to keep it (and myself) at an even temper for 20 minutes. Not a chance.

It was back to the bain marie, for me, re-heating, stirring, and pouring out the chocolate again. I did, eventually, manage to get my test blobs of chocolate (of untempered, newly tempered, tempered for 10 minutes, tempered for 20 minutes) done, and was amazed when I really did notice the difference in them

(dull versus glossy, bendy versus a satisfying snap). I also managed to keep the chocolate mass at an even temper, by adding in chocolate from the bowl over the bain marie, and keeping the bowl of tempered warm on a towel, and I have never been so happy to hear the kitchen timer go off, at the 20 minute mark.

The magnificent lake of tempered chocolate that I poured onto the parchment covered marble slabs, hardened into glossy, snappy works of modern art, much admired, and salivated over, by the boys and their friends, who arrived home for lunch, just as I was cleaning up.

I gazed at my work in satisfaction. One small stabbed finger seemed suddenly a very small price to pay for this. Here I was, a sadder but wiser student chocolatier, realizing, not for the first time today, “I have a whole lot to learn!” And I am having a great time learning.