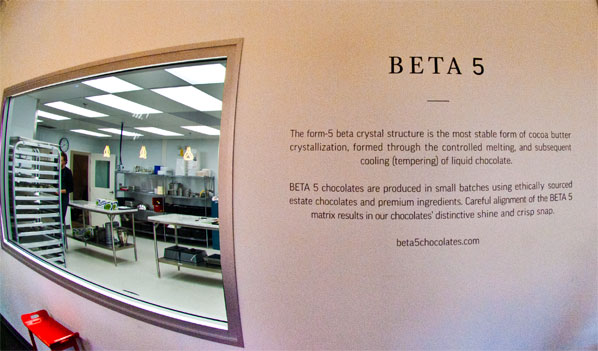 And when you put them together, they explode in your mouth in a burst of tart and sour goodness.

A few weeks ago, while researching (I love doing research for this blog) local chocolatier’s offerings for the Valentine’s Day post, my partner and I stumbled upon Beta 5 chocolates, in the industrial area of East Vancouver.

The brainchild of Adam Chandler and Jessica Rosinski, Beta 5 Chocolates takes its name from the stable crystals which form when chocolate is properly tempered, to create the smooth, glossy, snappy look and feel characteristic to fine chocolate.

And I am intrigued by the mission statement, from their website:

We wanted to create a different kind of chocolate shop.
One that uses the best ingredients we can find, in support of farmers and in the name of taste.
One that goes against the grain, by recognizing where we stand in the global economy and
by committing to making ethical choices instead of profit-driven ones.
One that is off the beaten path, that blurs the lines between customer and cook.
One that revolves around innovation and craftsmanship.

Well, I know they make a darned fine candied citrus.  The yuzu zest, of which I waxed poetic at the top of the posting, is enrobed in a matcha white chocolate that is not only absolutely and tartly delicious, but reminds me of Dr. Suess’ Green Eggs and Ham, in its brilliant green-ness, and comical curlicue shape. 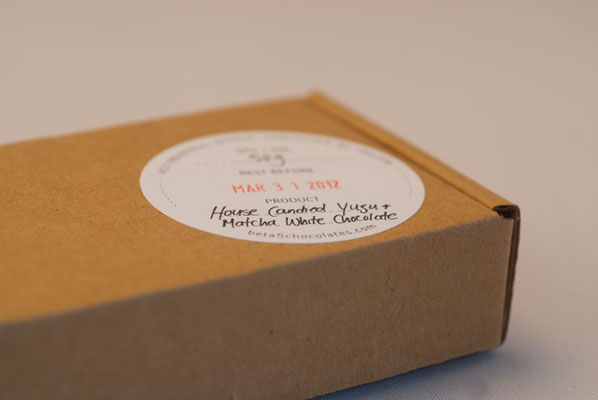 An elegant treat with a sense of humour, packed in a little brown box.  I need to find out more about this enterprise.  Adam and Jess are gracious enough to allow us to come and talk to them at their shop, which has been operating for almost a year, since March of 2011.

We talked to Adam in the bright, high ceilinged kitchen at Beta 5, whose big windows and open doorways between kitchen and store front, allow customers to watch the chocolate making process, and allow the staff to see who is coming and going, which fits in perfectly with the philosophy of “blurring the lines between customer and cook”. 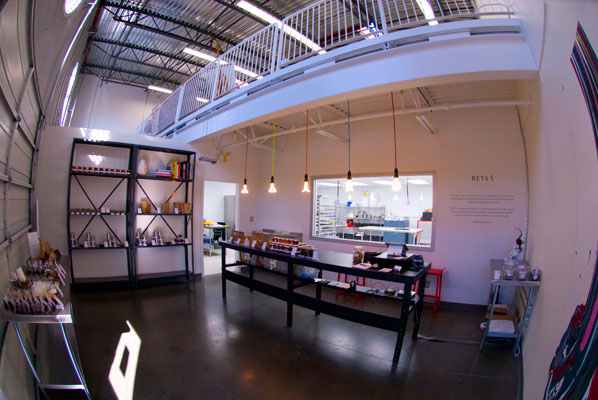 The feel of Beta 5 is definitely in keeping with the industrial nature of the neighbourhood, and their packaging reflects that, as well.  The afore-mentioned little brown sturdy corrugated cardboard boxes, sport a base layer of nubbly chocolate, instead of tissue paper, on which the packed chocolates sit.

The pate de fruits are packed in brown “mailer” envelopes, and the tumbled fruits and nuts are in mini paint cans.

The “brown paper packages” feel continues with their signature chocolate bar.  An industrial design friend created the bar’s mountain shape, and the wrapper is the line drawing of the model.  Pretty cool. 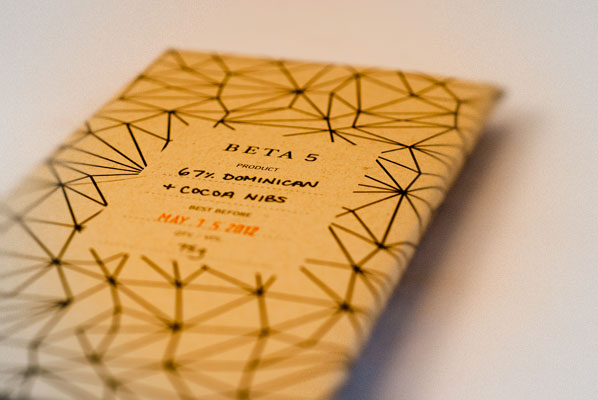 Operating for almost a year now, it was important to Adam and Jess to have their business close to home, in the neighbourhood in which they live.

“I’m influenced by my surroundings, by the city, by its nature.  I like to use local foods in the kitchen, when I can and my ideas play off that.  It’s important to us to use local produce supporting local farmers,  when we can.”

Not always possible, of course, in winter in Vancouver!  They had to go a little bit further afield to source the citrus and ginger for some of the winter items.  The citrus all comes from Rising C ranches in Reedley, California:

“In the summertime, we shop at the farmer’s markets as much as we can. Trying to make use of local products – it’s always in the back of our minds.  We like talking to the farmers, personally.” 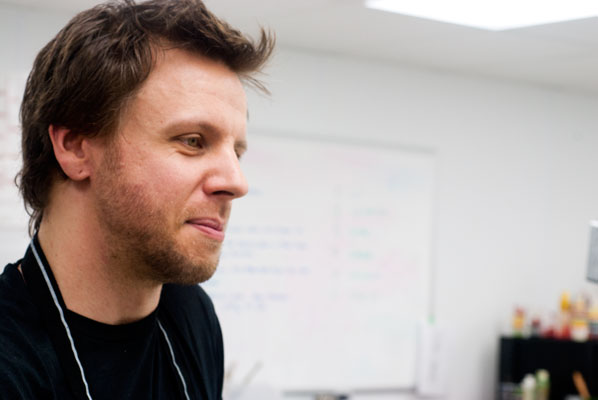 Chocolate is the main ingredient, of course, and a great deal of thought has been put into Beta 5’s choice.  They use Michel Cluizel chocolate, from traceable plantations.

“That’s an important ethic for us.  Yes, it costs $30 a kilo versus $8 a kilo for another brand, but we’re okay with spending more to get a product we can be pretty sure has been harvested by people who are being treated fairly.  A lot of people have no idea what goes into making chocolate and who harvests it.”

“The trees are sacred to them.  We feel good about supporting them, and we feel the product is infinitely better.  The Cluizels’s are always visiting the plantations, and are in touch with the differences in the taste of the chocolate from year to year, harvest to harvest.”

“Suppliers sometimes tell us we are making terrible business choices, but it has been good for us, so far.”

“Chocolate is similar to coffee and wine.  It has its varietals, its terroir (taste from a particular region).  That also influences our choices for flavor combinations – for example, this past month we were working with a herbaceous chocolate, which we paired with olive oil.”

“We were able to get table grapes from Milan Djordjevich, aka the Tomato Man, from Stony Paradise Farm Produce, in Kelowna.  We made our own raisins, which was a lot more work, sourcing and drying them, but the taste is so unique.  The flavor profile is a more interesting product.”

I look over to the corner of the kitchen and see the big, beautiful tumbler.  Is that where the raisins went?  Adam smiles:

“We’re trying to teach people that tumbled things don’t have to be Glosettes.”

Indeed, the raisins did not last (hmm, very smart, methinks.  Makes me want them even more!) but there are always four more flavours of Pebble to be had:  caramelized hazelnuts, sun dried cherries, espresso beans, and caramelized almonds.

“We found that these four sold really well –  like the marmalade – it was just something we were playing around with, and it took off.  At Christmas, we were just getting labels on the jars, as people were buying them.  So, we decided to run with it, because people have responded to it.”

Adam is being just a little modest – their Seville Orange Marmalade just took a silver at the Artisan Marmalade Makers Awards76, and the Rangpur Lime took a bronze.

People have also responded to their Pates de Fruits, so they are trying to present a different flavor every month.

“In the course of a month you get different flavours in the fruit, even as the pectin reduces.  Unique flavours, great for us, bad for doing it on a big scale.”

“I tailor the mix to people’s taste but the aesthetic is driven by me.  I get bored, so I fiddle around with different ideas.  I like changing it up.”

And he likes giving people a chance to see that in action. 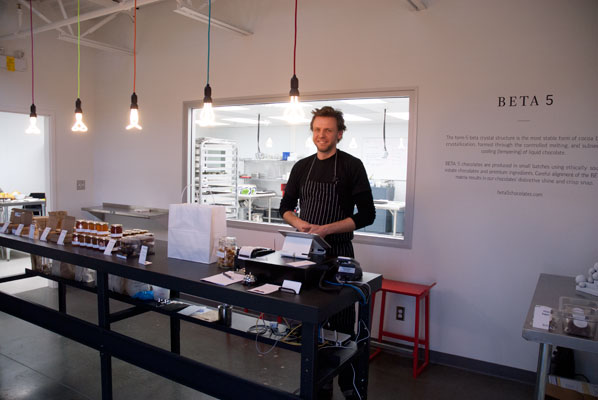 “We wanted to give people the sense of how much work is involved in what we do.  That’s the reason for these big windows.  We want the people who work for us to have a little room to play, while still having consistency in the product.  We want them to have a bit of freedom to explore and make mistakes.  That’s how we all get better.

We also have the cooks do the packaging, so we have the same people touching the product through all the stages. You are going to care more about putting it into the package if you’ve made it.”

And the packages I have brought home to taste are:

Marmalades:
Younger son and I used these as a great excuse for an afternoon snack, on this chilly day.  We both agreed that, while both very tasty, and refreshing , with a great balance of fruit to sugar, the Seville Orange had a richer flavor and more distinctive aroma.  And perhaps that is due to the type of fruit.  I do not think either jar is going to see the end of the next week. 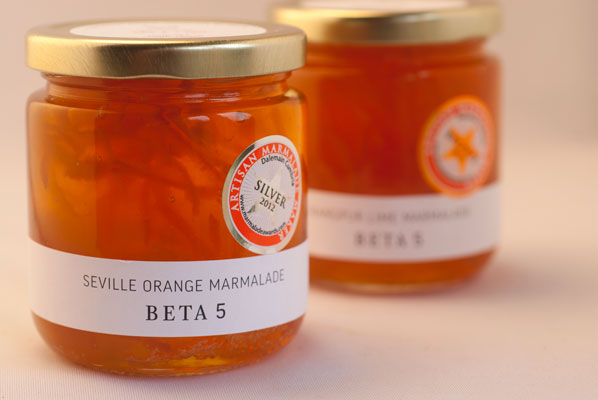 Grapefruit Jellies:
Nice texture, but I think I would prefer a sharper citrus taste.  These are very mild.  Not too sweet, which is nice, just a bit mild.  I’d love to see what they do with a zippier fruit. 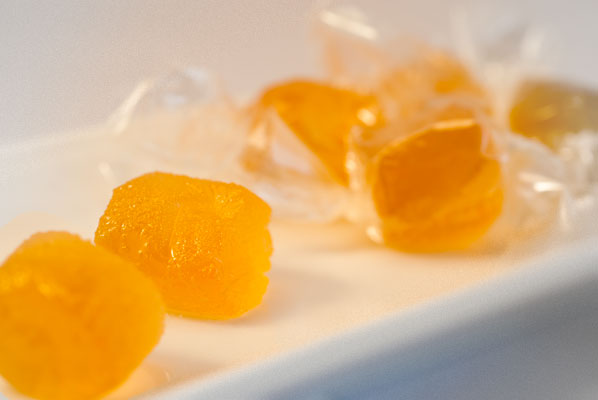 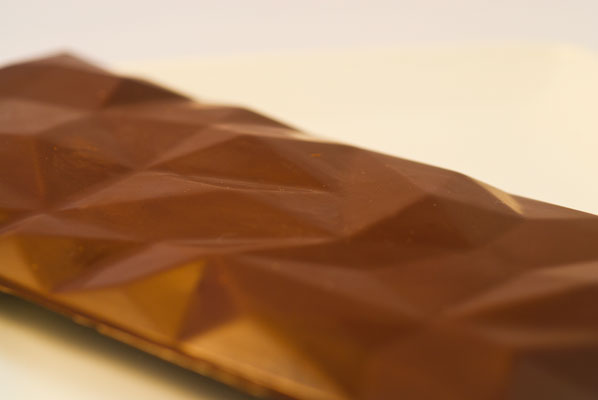 Shamrock Pot and Malt Balls:
It’s all about the malt balls.  They are gone.  My partner and sons have been scrabbling around the base of the shamrock pot, hoping to conjure up more of them.  Crispy light texture, which shatters satisfyingly in the mouth, and a creamy shell.  Mmmmm.  The pot is also a delight to look at, and tastes pretty darn good, too. 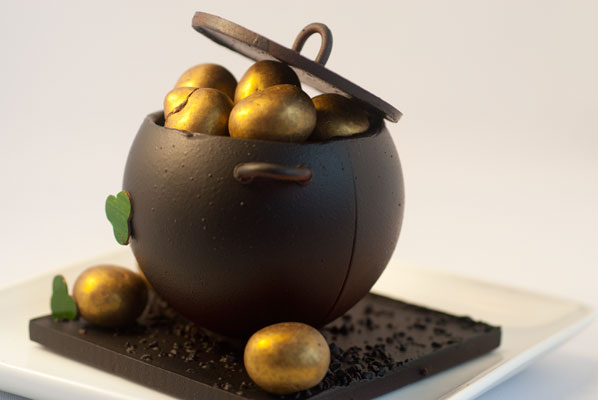 Candied Yuzu:
My absolute favorite.  The balance of flavours between the tangy citrus, and the slight bitterness of the match is tempered beautifully by the white chocolate – and I believe even white chocolate haters would love this.  I encouraged my white chocolate despising son, who loves citrus, to try one, but then realized the foolishness of my ways – there would be less for me!  I would like another box of these tomorrow.  Very refreshing, as well as delicious. 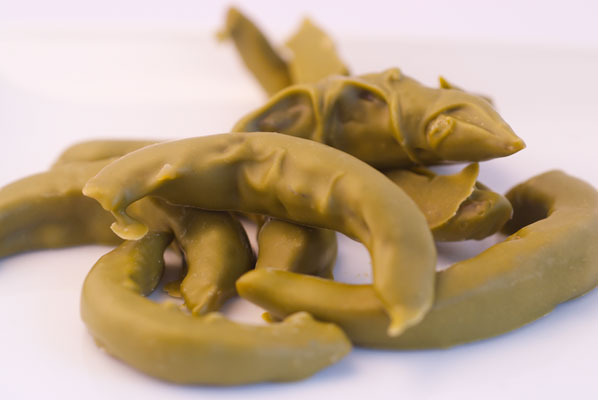