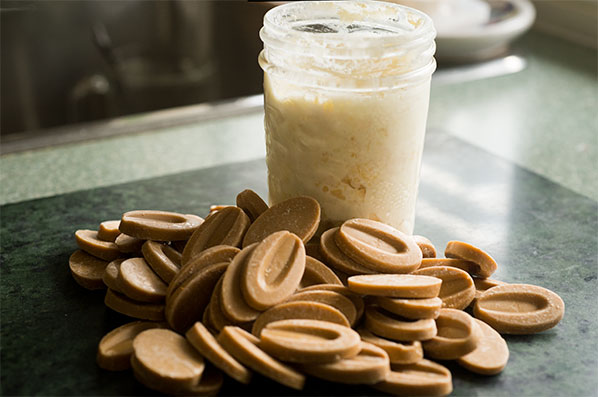 “Oh yes, they are really good.”

“Were you saving them for something?”

“The blog.  I was going to make something with them.”

“Ohhh …   They were really good – especially at night, when you wake up and you just want a little something tasty …

(sees me shaking the sparse contents of the bag)

“Can you do anything with that many?”

“Well, at least there are enough to photograph.”

What started out as a pound bag of Valrhona Dulcey blonde chocolate fèves (pastilles) now contains nine whole, plus some broken fragments.  If I was hoping to use them in an inspired chocolate creation, it would now need to be a very small one.

From the Valrhona website:  The first notes are buttery, toasty and not too sweet, gradually giving way to the flavors of freshly-baked shortbread with a pinch of salt.

I rattle the bag, open it and stick my nose in.  Mmm.  A slightly toasty aroma like shortbread biscuits.

I eat one broken-off piece.  Not overly sweet.  Toasty caramel taste.  I let the fragment melt on my tongue.  None of the creamy sweet flowery white chocolate flavour, this has a little edge of burnt sugar and toffee. I really must get another bag.

After a trip to Gourmet Warehouse to replenish the stock (where I was admonished not to give my partner a hard time for polishing off a whole bag as they do it regularly) I pick up a half litre bottle of heavy cream and head home, an idea forming in the back of my brain.

Maybe it is because we just got Netflix, and I have been indulging myself, watching multiple episodes of Doc Martin, a British TV series set in a fictional seaside hamlet in Cornwall, but I have been longing for clotted cream and for some reason, the caramelized chocolate seems like it will partner with it.

Clotted cream, according to Wikipedia:

“is a thick cream made by indirectly heating full-cream cow’s milk using steam or a water bath and then leaving it in shallow pans to cool slowly. During this time, the cream content rises to the surface and forms ‘clots’ or ‘clouts’. It forms an essential part of a cream tea.”

“Although its origin is uncertain, the cream’s production is commonly associated with dairy farms in South West England and in particular the counties of Cornwall and Devon. The current largest commercial producer in the UK is Rodda’s in Redruth, Cornwall, which can produce up to 25 tons (25,000 kg; 55,000 lb) of clotted cream a day. In 1998 the term Cornish clotted cream became a Protected Designation of Origin (PDO) by European Union directive, as long as the milk is produced in Cornwall and the minimum fat content is 55%.”

I have had it only a few times in my life.  My favorite memory of clotted cream was the graduation cream tea I attended in my last term of theatre school.  The artistic director, Antony Holland, was originally from Devon (the county next to Cornwall in England’s South West corner) and it was a great honour to be invited to his home for tea, with his own renowned homemade clotted cream served with scones and homemade jam and long tall tales from the theatre.

I’ve never forgotten the taste – a cooked, buttery, nutty incredibly rich taste, nothing like whipped cream.  I have had it a few times since, when visiting Britain, but clotted cream does not travel well, and although tiny jars of it can be purchased here in Canada (for the astronomical price of $6 for 150 ml), it just doesn’t taste the same.

Nothing for it.  I must make some, and I am going  to pair it with the Dulcey in a ganache.  This may be horribly sickly sweet, or oily or just plain wrong, but I have a feeling it’s going to be good.

Although by definition, clotted cream is made with indirect heat, it can also be made in the oven, overnight, at a low temperature.

Make sure the cream you use has a high butterfat content (at least 33%, but preferably higher. If you can get 40%, buy it – you are very lucky!) and is not ultra-pasteurized (ultra high heat treated).

I have a convection oven, so I reduced the temperature to 170 F, for twelve hours. The resulting product was a thick yellow layer of cooked cream, which I spooned into a sterile glass mason jar.  It had the consistency of butter, and made approximately 1 cup.

There was a liquid layer (5/8 cup) of cream underneath the solid yellow top layer.  I really wanted to “test” the clotted cream, so I made a batch of these very good plain scones using this leftover liquid. 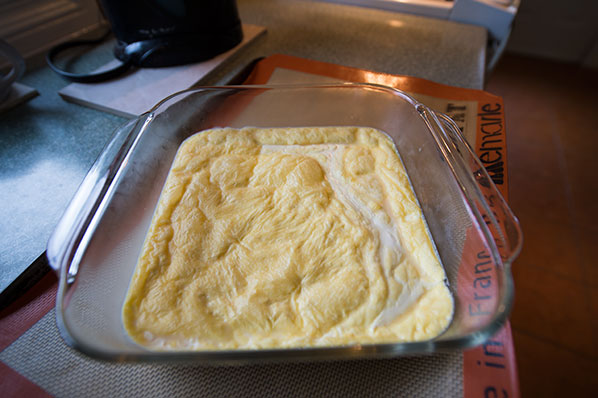 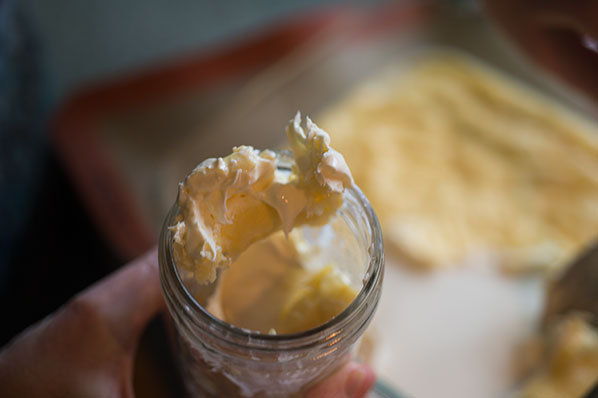 Mmm.  Oh.  The combination of cream/jam/scone is unbelievably good.  The batch lasted about half an hour.

But this is a mere sideline.  On to the ganache. This is incredibly easy to do, and the resulting bonbons are unbelievably rich, smooth, toasty caramelly, toffee tasting, with a hint of browned butter.  Worth every calorie.

Let the clotted cream stand at room temperature for 20 minutes, so it is not chilled when you add it to the chocolate.

Stir clotted cream into the melted chocolate in five additions.  Stir well to a smooth consistency.  I found I needed to use an immersion blender to create a good emulsion.  The resulting  mixture will be the consistency of soft toffee. Let stand at room temperature, while filling chocolate molds. 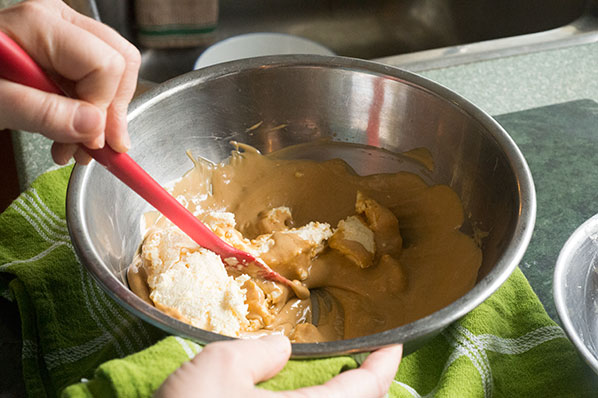 Once chocolate in molds has set, spoon ganache into mold cavities, and back with a layer of tempered chocolate.  Unmold when set.

If you do not want to mold these, alternatively, the ganache can be spooned onto a Silpat mat or parchment and refrigerated until firm enough to roll into balls.

In a food processor, chop some good quality chocolate bars, to fine bits.

Roll ganache balls in chocolate bits and refrigerate.  Eat straight from the ‘fridge!

Ohhhhh, my goodness.  In either form, these chocolates have become a huge family favorite and will not be going out the door … because there aren’t any left. 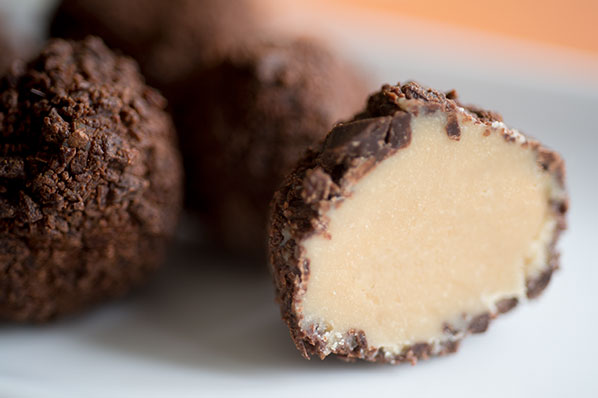 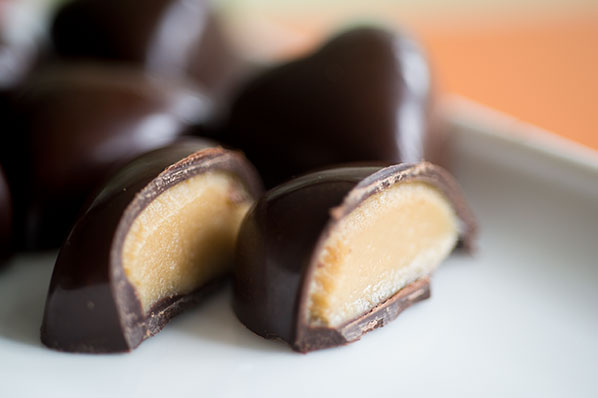