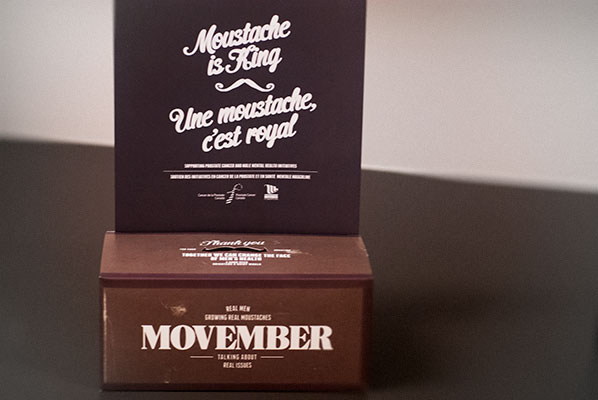 Well, it’s cold, again.  That “crawling up your back, hunching up your shoulders, why didn’t I put on the big bulky sweater, I can’t feel the ends of my fingers” kind of cold.

November has come to us in full force and although I wouldn’t normally welcome facial hair, I have been looking almost enviously at my male friends who are sporting moustaches for this month, in support of prostate cancer research and programs and men’s mental health initiatives.

It’s Movember!  This movement began in Melbourne, Australia in 2003, and has grown (no pun intended) each year, raising millions of dollars, now with participants in countries around the globe.  The goal of Movember is to “change the face of men’s health.”

“On Movember 1st, guys register at Movember.com with a clean-shaven face. For the rest of the month, these selfless and generous men, known as Mo Bros, groom, trim and wax their way into the annals of fine moustachery. Supported by the women in their lives, Mo Sistas, Movember Mo Bros raise funds by seeking out sponsorship for their Mo-growing efforts.

Mo Bros effectively become walking, talking billboards for the 30 days of November. Through their actions and words, they raise awareness by prompting private and public conversation around the often ignored issue of men’s health.”

Even if I could manage to grow a decent moustache in a month, I am in rehearsal for It’s a Wonderful Life, and I don’t think the director would take kindly to my character sporting one … as I am playing George Bailey’s Mom.

But I do think it’s a worthy cause and to encourage those hirsute pals of mine, including the male bar staff at the Arts Club Theatre (where I am working) my family and I are more than happy to proudly sport chocolate moustaches in a variety of styles.

I have seen quite a few molded versions of the chocolate moustache, especially in Australian chocolate shops, and I found a link to some very artistic ones designed by the Spanish designer Diego Ramos:

Perhaps this has given me the inspiration to do a batch of moustaches, free hand.  Yes, I am going to attempt to make moustaches on a stick, using free poured, tempered chocolate, and a steady hand.

For this fun project I used 8 ounces dark chocolate and a dozen rolled paper lollipop sticks I had, left-over from a batch of cake pops.  I laid the sticks out on my large Silpat mat, staggering them, to allow for as much room as possible between the tops.

I tempered the chocolate.  Because it was a relatively small amount, I used some lovely pastilles (I always feel slightly decadent using them, instead of carving hunks off the large slab – but they are oh, so easy) and the seeding method of tempering (using 20% of the total weight as the seed chocolate – 2 ounces)

I was a bit concerned that I would not have adequate chocolate coverage across the backs of the moustaches, but this did not turn out to be an issue, as I rolled the sticks in the first pass of poured chocolate, which seemed to more or less embed them. 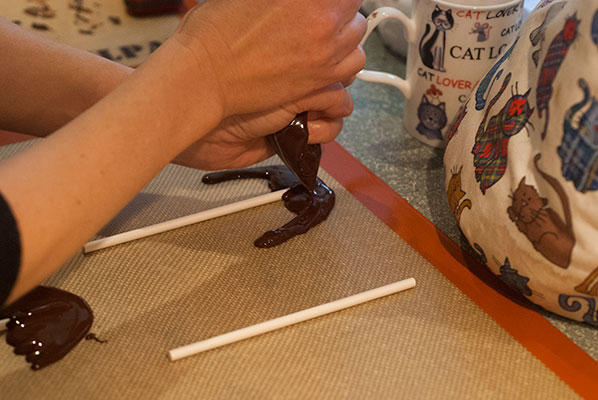 During the tempering process, I tried to “hurry up” the necessary temperature drop to 27 degrees Celsius, by placing a chiller bag from our freezer in one of my metal mixing bowls, and placing the bowl of cooling chocolate over this – an impromptu ice bath.  If you are going to try this, it is important to have the bowl of chocolate resting on the chiller bag for short bursts of time, all the while stirring the mixture, so as not to create cold patches, and to ensure the creation of the desired V formation crystals. 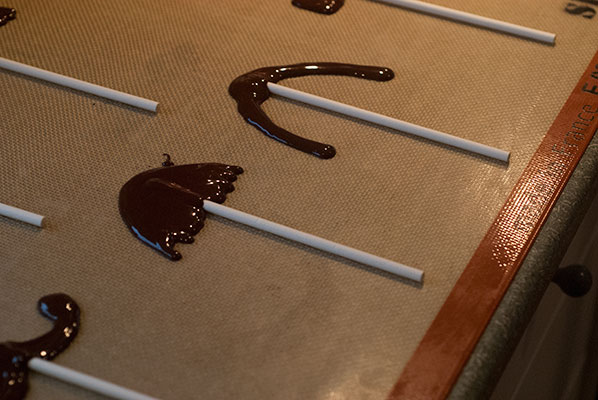 Then, working very quickly, I poured the tempered chocolate into a thick plastic freezer bag, and snipped a tiny opening at one corner.  Massaging the bag of chocolate in two hands, I poured a thin stream of chocolate over the first lollipop stick to create a base, then swooping out form this centre, swirled the chocolate into an upturned moustache “arm”.  I was surprised at how much control I had with a flexible bag full of liquid chocolate, but it seemed to flow out of the tiny opening in a steady but not overwhelming stream, and I was able to stop the flow by angling the opening up.

It then became a race against time – or rather, against cooling chocolate to create as many moustache designs as I could.

This is where my patient family is invaluable.  I had already looked up a template of different styles of moustaches, but couldn’t pull my face up long enough to focus on the far off screen of my laptop, so my dear husband and Younger Son were called into service, shouting out differing style names such as “toothbrush”, “Ned Flanders”, “Walrus”, “long skinny rock star”, “melodrama villain”.  My husband even threw the curve ball of “soul patch” so that was added to one moustache, with a space for the mouth. 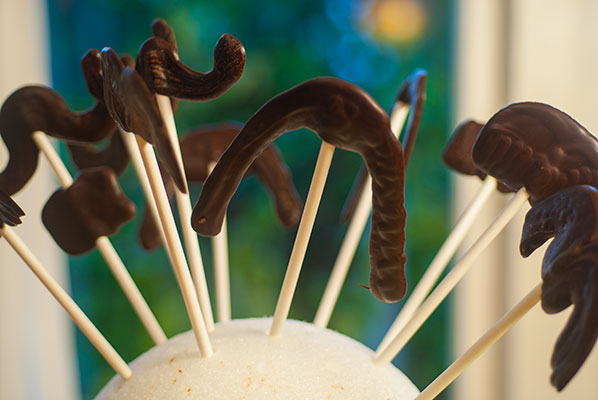 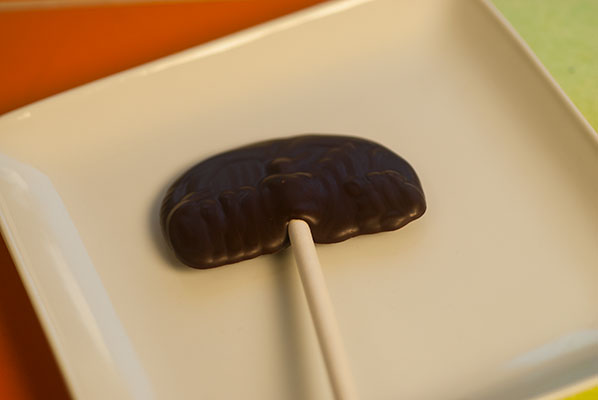 If I were to do this again (and I think I definitely will) I would like to make some “salt and pepper” ‘staches, using white chocolate brushed onto the dark with a silicon pastry brush.

I squeezed the excess chocolate out to cool completely on the Silpat mat. The bag could just be disposed of, at this point, but I am a frugal Scot, and opted instead to wash it out, and hang to dry for the next batch.

It was really fun, took no time at all, and I had a dozen chocolate “Mo”s cooling on lollipop sticks.

I think I’ll take some into the bar tomorrow, to encourage the “Mo Bros” at the mid-way point in their task.

Or perhaps I will walk into rehearsal tomorrow sporting one … hmm, maybe Ma Bailey would actually suit a nice Handlebar, after all. 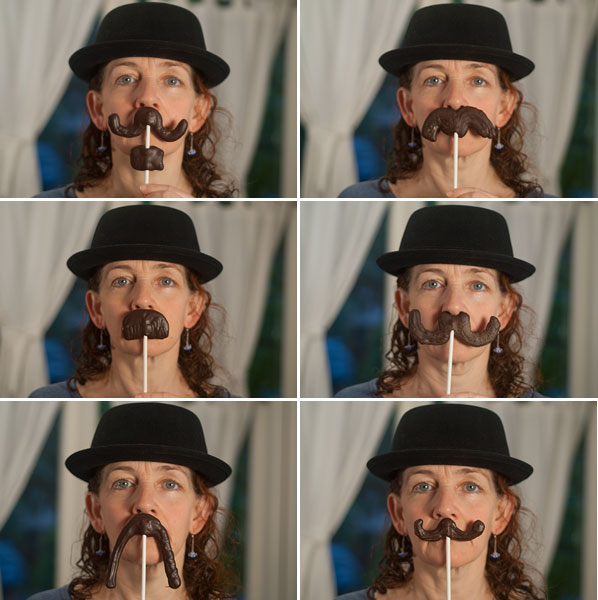 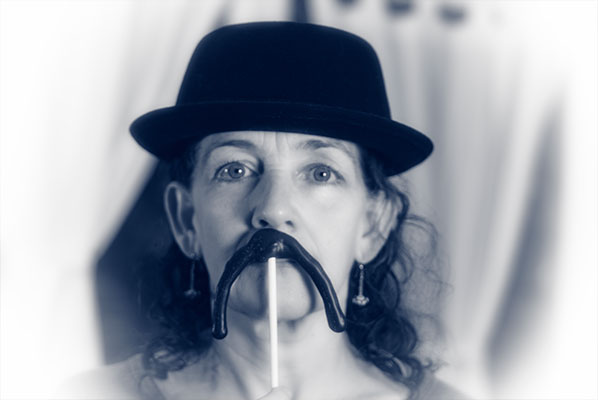