I didn’t blog last week, as I have been steeped in rehearsals for a very special play:  My Mother’s Story.  We are a cast of eight women, telling the stories of ordinary women’s lives – except that they are all extraordinary.

The call went out last year, to women on Vancouver’s North Shore, to write the story of their mothers’ lives, in 2000 words.  From all who sent in stories, eight were selected to be woven together into a play.  So we, the actors, each play the writer and her Mum.  The stories range geographically far and wide, and cover many ethnicities.  And the foods and customs evoked in the stories seemed like a perfect opportunity for me to come up with some signature chocolates.

Part of rehearsal is to observe and learn about the other characters, so it was great fun to do this for the purpose of coming up with each of the mom’s unique flavours.  Here they are:

Sigrid:
I started with the mother I am playing.  She hailed from what was East Prussia, in the eastern part of Germany, but was forced to flee during the war, and ended up in Bavaria.  She always missed her home of “dark forests and crystal lakes”, so a Black Forest Truffle redolent with dried organic cherries and Kirshwasser seemed appropriate.

Here is a link to the recipe I used. 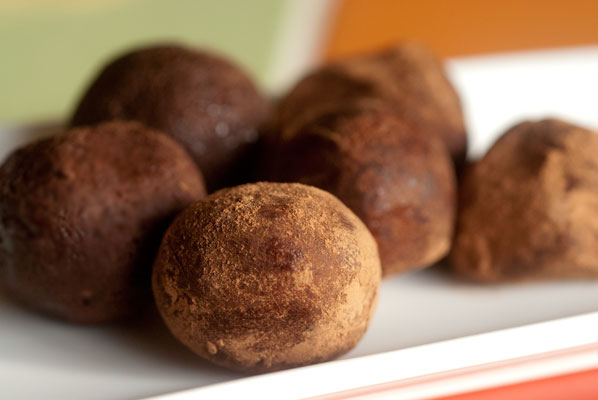 Doris:
One of the Mums who was born and raised in British Columbia, Doris is a wonderfully funny rule breaker and iconoclast, who opened the family home to all sorts of alternative lifestyles.  For Doris, I made maple fudge – the old fashioned way, with heavy cream and Canadian maple syrup – it’s bumpy and messy around the edges – and makes you smile as soon as you bite into it

Here is the recipe I used. 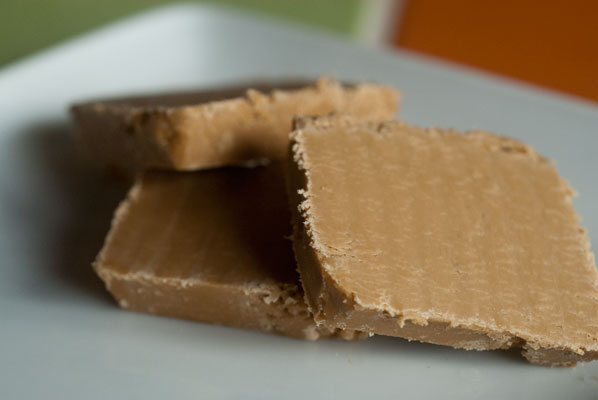 I did try making mendiants with crumbled bits of the fudge on circles of tempered chocolate, but it really seems to “gild the lily” for me – I liked the straight up maple flavour, although Elder Son liked the milk chocolate/maple/cream combination.

Puju:
a sophisticated urbanite, an artist with a degree in economics, and a champion at table tennis in a glittering sari, for Puju I made a Masala Chai Truffle, with the beautiful aromas of cinnamon, cardamom, pepper, and cloves in a milk chocolate cold infused ganache. I used a masala chai recipe I have been making for years, given to me by a friend from India.

In a measuring cup, I combined 2/3 cup heavy cream with:
1 cinnamon stick
2 green cardamom pods
4 black peppercorns
4 cloves
¼ teaspoon ground ginger
2 tablespoons loose Assam tea
I covered the mixture and left it to infuse overnight, then gently heated the cream to a bare simmer.  Strain the hot cream mixture through cheesecloth in a basket strainer, then, in five additions, add it to 9 ounces of partially melted good quality milk chocolate.  Bring to room temperature, then chill for several hours.  The ganache will be soft.  It can, at this point, be piped into molded shells, or quickly rolled into balls, chilled again, and enrobed with tempered milk chocolate (I try to keep the balls refrigerated until just before enrobing).  They can also be coated in a dusting of cocoa powder.

Vassilka:
Another casualty of the Second World War, Vassilka’s often bitter struggle to survive:  hiding her young daughter in the rafters of a barn, safe from advancing enemies who would have sent her away, crossing a minefield to pick up her widow’s pension cheque after her young husband perished in battle, needed a flavor to reflect that experience. I looked up Macedonian cuisine and discovered that coffee has had a significant role in Macedonian lifestyle and culture since the days of the Ottoman Empire.  Coffee’s bitter edge is the perfect partner to a dark chocolate truffle, dusted with icing sugar, as Vassilka was also a master of fine lacework, and her daughter still possesses hundreds of beautiful, delicate hankies and doilies.

For Vassilka’ s truffles:
I also did a cold infusion of:
1 cup heavy cream, and added 3 tablespoons of ground coffee instead of the spices.  The next day, I partially melted 8 ounces of good dark couverture (dark chocolate usually  needs a 1/1 ratio of chocolate to cream for ganache), heated the cream to a bare simmer, strained it through a cheesecloth lined strainer, and added it to the chocolate in five additions, with constant stirring, being careful not to incorporate in any air. Once it was at room temperature, the mixture was chilled for several hours, until of a consistency to roll into truffle balls, coated in natural cocoa.

Molly:
Molly, from a family of ancestral chiefs of the Squamish First Nation, and a champion softball pitcher (they had more trophies than house to put them in) grew up and picked blackberries on the hills where the theatre now stands. For her, I made a blackberry pate de fruits, in a milk chocolate cup.

For pate de fruits, I always return to the fabulous recipe on Zoe’s website.

(This is a slight adaptation -blackberry instead of strawberry – of requested recipe, at the bottom of the blood orange pate page)

puree the berries and cook in the same manner as the blood orange pâte. But, you will cook for about 6-7 minutes depending on how watery the berries are. Then add the Certo and let set.

For the milk chocolate cups, I tempered 16 ounces of Callebaut milk chocolate couverture, and spooned it into mini silicon baking cups, swirling up the sides for full coverage, and to ensure an even shell.  I then gently chilled these to set, before filling with the pate de fruit, then topping with more tempered milk chocolate to seal.

To make the chocolate cups, here is our family’s recipe:

Intro to Chocolate Cups Recipe
“I have been making these cups for 60 years now, and way back then, was a teenager working in a big office in Scotland.

It was during World War II, and chocolate was very hard to get, but my Gran had a wee man who sometimes could produce scarce items for a friend, and on one occasion, came up with a large box of chocolate, which I was allowed to share with the girls I worked with, one of whom showed us how to make the cups.

Of course, we had to fill them with synthetic cream and perhaps jelly, but they hit the spot and we all thought we had just invented something special.

Eons have passed, and all my friends have enjoyed filling these wee cups with all sorts of exotic things, but sweetened whipped cream, sponge, and strawberries are my favourites.

I no longer use paper cups.  I use mini silicon ones and it makes the job so much easier.  I also temper the chocolate, so it sets much faster and one doesn’t need to resort to the freezer! 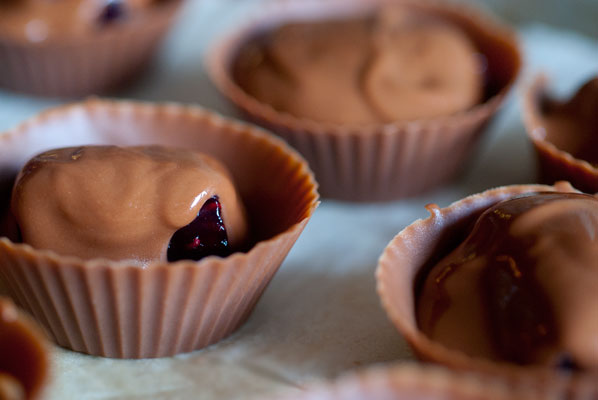 Mary:
Mary, born in Vancouver, spent part of her childhood in in Hong Kong, fought her way back from a disastrous paralyzing operation to become an advocate for the disabled and raise two strong-willed daughters, needs something sassy with a bit of bite.  A fruity, winy single origin dark chocolate covering organic candied ginger is perfect.

There really is no recipe for these (which is perfect for Mary – she was too busy!), other than to temper some lovely couverture, pour it into circles on a Silpat mat, and have great fun studding them with generous pieces of ginger. 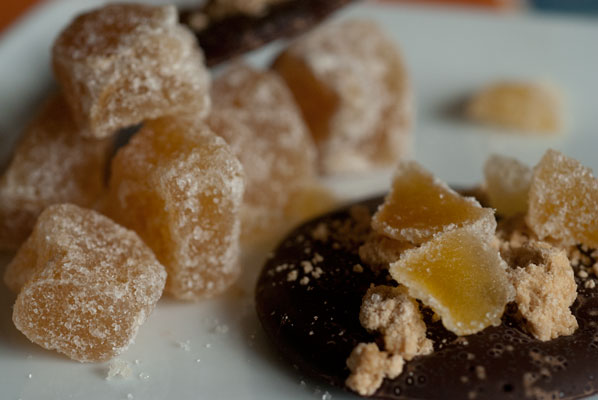 Lenke:
Lenke’s incredible journey, forced from her home in Hungary as Holocaust survivor to Israel, then on to Melbourne Australia, where she became the family matriarch, is sometimes very dark, and also a compelling and beautiful story of survival – for her a dark chocolate heart shell enclosing a white chocolate lemon ganache, to exemplify the bitter and sweet of her life.

For the filling, I make a simple ganache of 8 ounces good quality white chocolate (Callebaut), melted at 50% power in the microwave until the mass is 70% melted.  I added 4 ounces Avalon organic whipping cream, brought to just below the boil, in five additions, constantly stirring.  I then added in tiny drops of natural lemon and lime oils.  These are very concentrated, and I used a medicine dropper to add them in, until my chief taster (my very patient partner) pronounced the ganache to be” citrusy enough”.  It is thin, but an ideal consistency (once cooled) to fill the cavities of molded dark chocolate hearts. 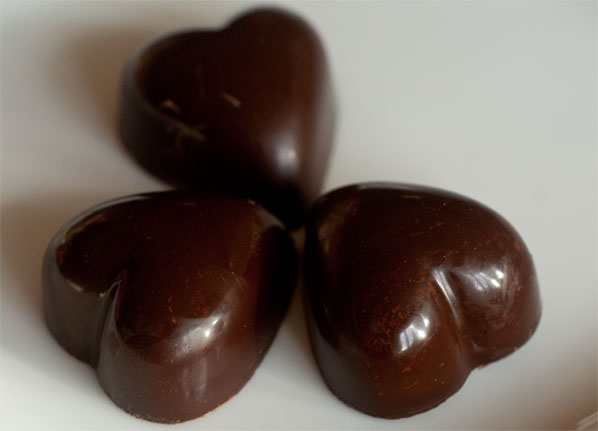 Marion:
Proud of her Irish Catholic roots, elegant Marion, who ran a large family and home through the war and the 1950s and lived all of her life on the North Shore, gets a simple but potent whiskey truffle.

This recipe, from Delia online, is simplicity itself, but as elegant as Marion.

On Opening Night, the actors were absolutely thrilled with the “Mum Chocolates”.  I can’t say they are the reason the show was so warmly received – I rather think it was the recognition of the audience that what seem to be ordinary lives are in fact, extraordinary.

And in my humble opinion, every single Mum ought to be celebrated with something as rare and special as they are:  chocolate! 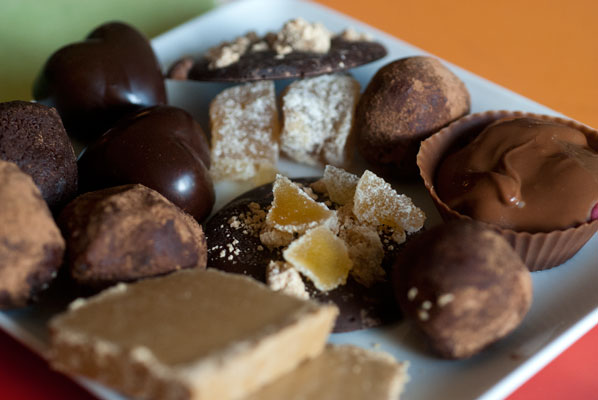