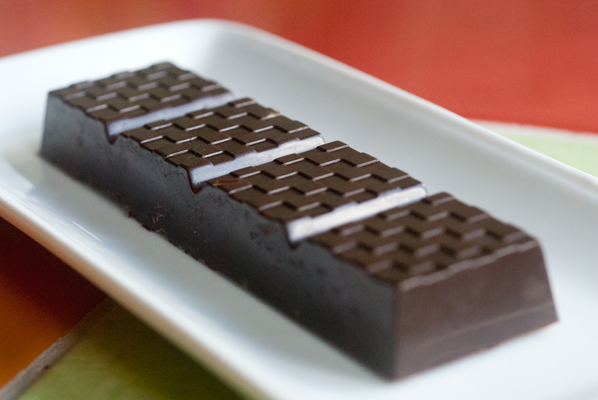 It is almost summer in Vancouver.  Officially it is, as of this weekend, but just try telling that to Mother Nature.  I have been craving berries and summer fruits, and our front yard garden crop of strawberries is beginning to look very good, if wet, but until they are at their peak of perfection, I have found a wonderful cheat.

I had such fun a few months ago, using pounded up (in a mortar and pestle) freeze dried berries to naturally colour white chocolate.  I procured those berries from a box of breakfast cereal, and using the method provided on Jojo Krang’s beautiful blog.

I was able to produce some gorgeous, pink marble hued white chocolate hearts, with a very mild but tasty berry flavour. 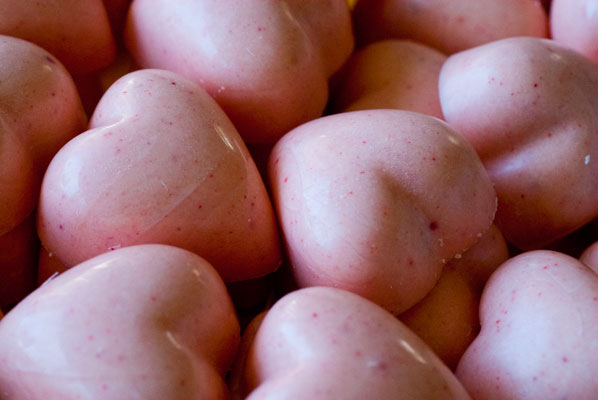 I have been wondering how well they would combine with dark chocolate – obviously this would be a taste experiment rather than a visual one.

I have wonderful memories of savouring a Dagoba blueberry and lavender dark chocolate bar at an open air performance at the Oregon Shakespeare Festival in Ashland.  Perhaps it is all tied up in the play and the place and the fresh summer air – but I don’t think so.  I loved that bar and ate it way too fast.  I had tickets for both a matinee and an evening performance the next day, and I confess I had a bar at each of those performances.  The bar was crunchy and infused with lavender oil.  I don’t think the blueberries in this particular bar are freeze dried, but I love the contrasting textures of crunchy and smooth – and that is what I will try to replicate. 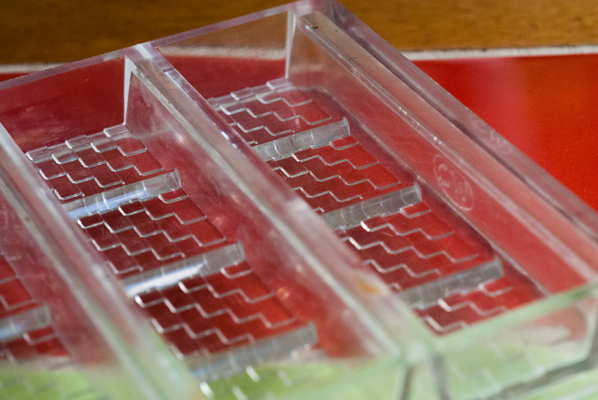 All of this is because I have a brand spanking new chocolate bar mold just begging to be tried out. And because there is something so straightforward about bars – they are sociable, can be shared easily among friends, can be carried in your bag, they make a nice snap when you break them (if properly tempered) and are a little less formal than bon bons. 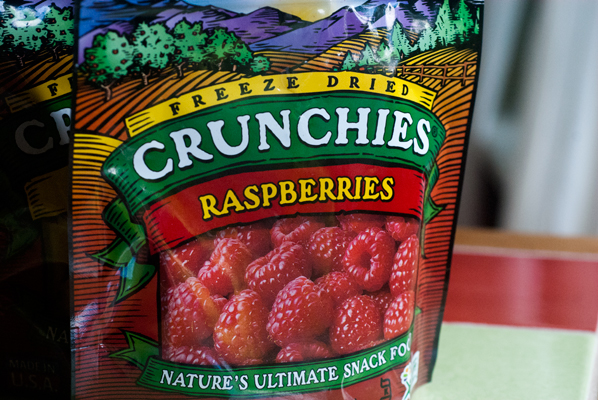 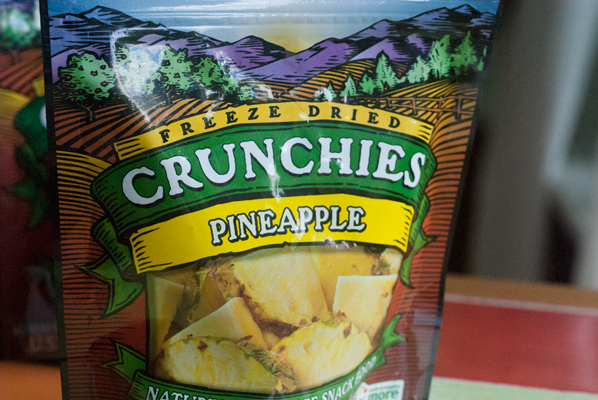 I jog down to my village’s small, friendly and always-has-the-unusual-products-I-need grocery store, and arrive home with two bags of Crunchies:   freeze dried pineapples and raspberries.

I was first introduced to freeze dried fruit by our dear, much admired friends who travel everywhere on bikes.  Even when they take an international trip, they bike to the airport, pack up the bikes for flight, re-assemble them when they land in the other country and bike off into their adventure, doing perhaps 1100 kilometres for a relaxing holiday.  I am in awe.  They are also extremely kind-hearted, and very encouraging to a duffer like me, who rides a bike with a big wide generous bottomed saddle, and gets off to push the bike up steep hills.

They carefully weigh and measure everything, as this is of supreme importance (they once borrowed my kitchen scales to weigh the difference in grams between two sleeping mats) when packing everything in panniers.

They usually air dry their own fruit, but swear by the freeze dried stuff as invaluable for flavor, and quick energy, especially when hiking.

Some freeze drying fun facts, according to the Wikipedia entry:

”Freeze-drying”’(also known as lyophilisation, lyophilization or cryodesiccation) is a dehydration process typically used to preserve a perishable material or make the material more convenient for transport. Freeze-drying works by freezing the material and then reducing the surrounding pressure to allow the frozen water in the material to sublimate directly from the solid phase to the gas phase.”

And, according to the information on the Crunchies Food Company bags: 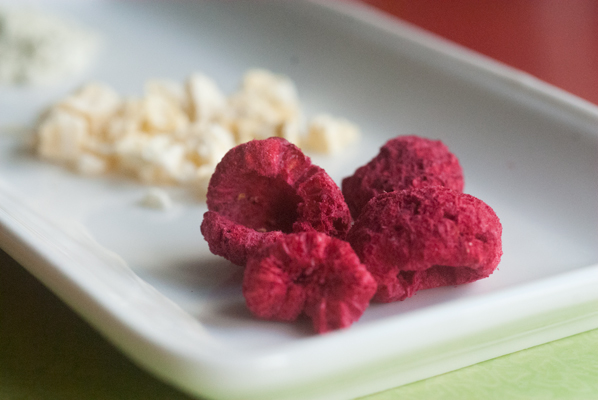 The raspberries are, surprisingly, whole, and look like – well – raspberries.  They pack a really intense wallop of aroma and flavor.  The texture is very odd, but interesting, as they resemble nothing so much as popcorn twists – sort of foamy and crunchy ones.  Not unpleasant, but I wouldn’t want to eat them by the handful.  They sort of dissolve on the tongue, but break down into good sized bits in the mortar and pestle.

Likewise, when I open the pineapple, a strong hit of the tropical fruit opens my nasal passages.  Small hard chunks (they resemble the canned chunks, in miniature), they pulverize down to a fine powder in the mortar and pestle. 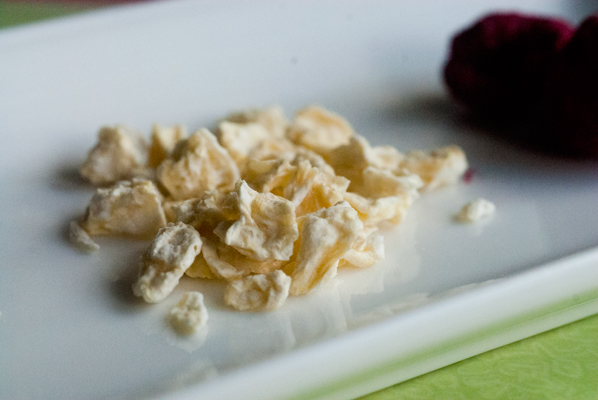 The chocolate, for once, tempers easily (maybe because I am not in a hurry) and I pour it into the molds, then carefully sprinkle on the pulverized raspberries and pineapple, then swirl them into the chocolate with a toothpick.

Giving the mold a couple of good bangs on the counter top to settle and disperse air bubbles, that’s all there is to it.

I used approximately 1 teaspoon of fruit per bar.

The pineapple bars were disappointing – the flavor was so subtle it was almost undetectable and next time I would definitely leave the pieces whole, and double or triple the amount – the dark chocolate just completely overwhelmed the taste.

The raspberry bars were much more successful, although next time I would still double the amount, and leave the pieces in bigger chunks.  The raspberry taste and slight crunchy texture really worked however, and is definitely worth another go.

I glance out my window, look to the North Shore Mountains (we live almost on their slopes) and notice the clouds are actually parting.  We will soon have that most elusive and rare thing – a rainbow filled afternoon after a rain.  There is always an upside to our lousy weather and my efforts today, while the rain poured down, have resulted in a raspberry and dark chocolate treat, perfect for a take along snack for a slow and relaxing after-the-rain bike ride, on a wide bottomed bike. 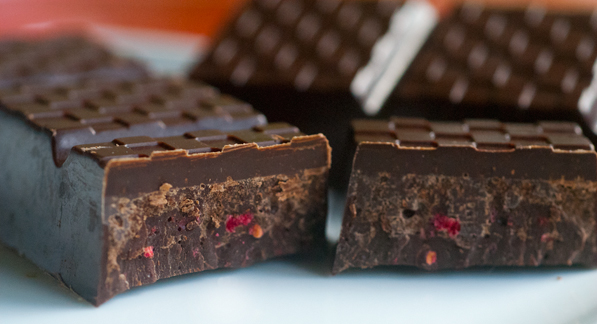