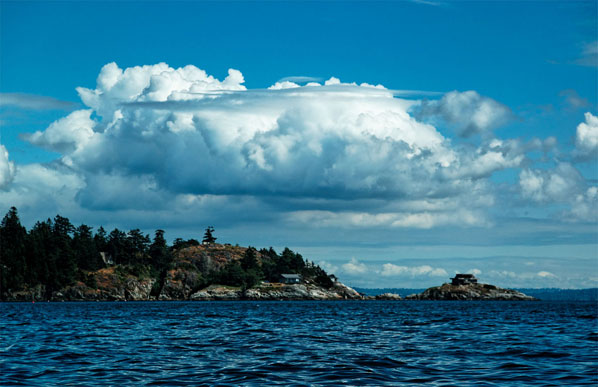 It seems as though it may finally be spring in Vancouver.  Or, if it isn’t and we have another hailstorm (as happened yesterday), I still feel a desperate need to invent things that will make it feel like spring.  Like that bank of fluffy clouds, lined up in a perfect row across the skyline, as though someone has pushed  a ruler underneath their bottoms.  So white and happy, and not full of rain.

And since I have a friend who has written a play, which is opening tonight, at Studio 58 (my old alma mater), and she has been a loyal follower of this blog since its inception, I have decided to make her an opening night gift of springy, fluffy chocolate thingys.

I have been buoyed up by my recent relative successes in hand dipping/enrobing, and have been able to make a fairly decent job of sturdy things, like ganache and Maltesers.  I am now going to try something I remember from another long ago Opening Night gift – a box of dark chocolate covered lemon marshmallows. They were from Poland, and had the thinnest shell of tempered chocolate, which shattered into the squishy tangy lemon marshmallow centre when you bit it.  I ate more than my fare share (a good three quarters of the box), and had to buy the rest of the cast another box.

I am now determined to make some just like the ones I remember.

But, to warm up, and to have a Plan B, in case my enrobing goes disastrously wrong (having been there many times), I begin with Dark Chocolate molded lemon marshmallow cream hearts. 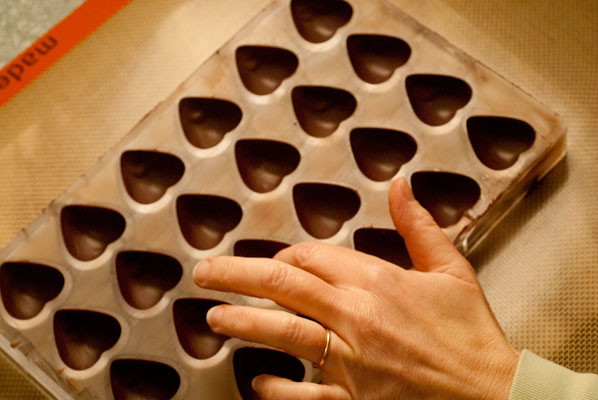 Marshmallow cream is a huge favourite in our house, and since I refuse to actually buy the commercial tubs of it ( a combination of proud Scottish thriftiness and an attempt to cut down on the number of chemicals we ingest), the boys were pretty happy to see me making it in the Kitchen Aid mixer.

I like this recipe very much, as it comes together quickly and fluffs up satisfyingly.  I like the fact that this one contains a tiny bit of cream of tartar, which adds stability to the egg whites.

Perhaps this is not the case in other countries, but I still find it confusing that the product I would call white corn syrup is often referred to as light corn syrup in many recipes.  Having used light corn syrup last time, and having the marshmallow cream retain a slight aftertaste, I made sure to use white corn syrup, this time, especially as I wanted nothing to interfere with the flavor of lemon. 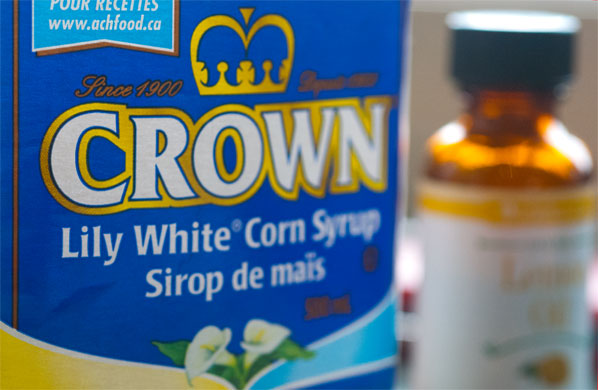 Ah yes, the lemon flavor.  This recipe calls for a large quantity of flavouring – 2 Tablespoons of vanilla.  While the Kitchen Aid is beating the mixture, I open my tiny bottle of LorAnn  Lemon Oil.  It smells heavenly.  And here is where I should have slowed down and thought it through, but in my zeal to make a really lemony marshmallow cream, I added 1 Tbsp vanilla + 1 Tbsp Lemon Oil to the mixture.  My son wandered in to the kitchen and announced:  “How come it smells like cleaner?”  That was my first clue that perhaps I had been a little over enthusiastic with the lemon oil. 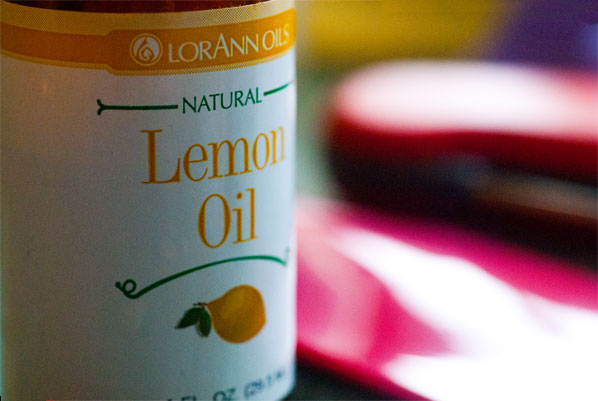 Later, when I went back to the LorAnn website to check, and found my product in the super concentrated flavours section, I re-read what I should have known (and had in fact read when I first bought it):  you are meant to use one quarter to one half as much as the recipe calls for, when substituting the oil for extracts:

‘A little goes a long way! LorAnn Flavors are three to four times the strength of water or alcohol-based flavorings or “extracts”.’

I am afraid I have ruined the whole batch, but am assured, after many sample tastings by the family, that it tastes just dandy.  Just to be sure, I have them squirt the cream onto small leftover pieces of the chocolate I have molded.

At this point, they catch on.

Our elder son changes his tune, tells me he “doesn’t think it’s my best work” and that I should probably just let the family eat these ones.  I am now satisfied they are okay. 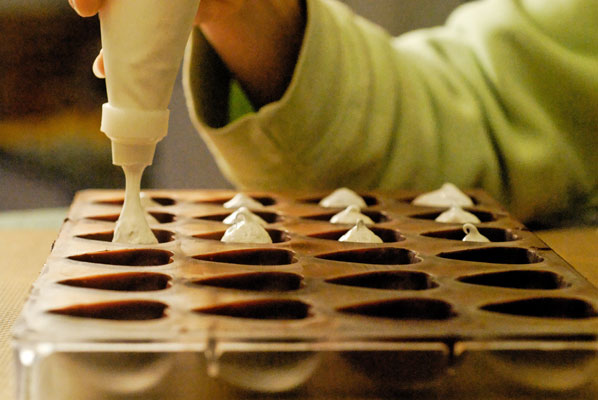 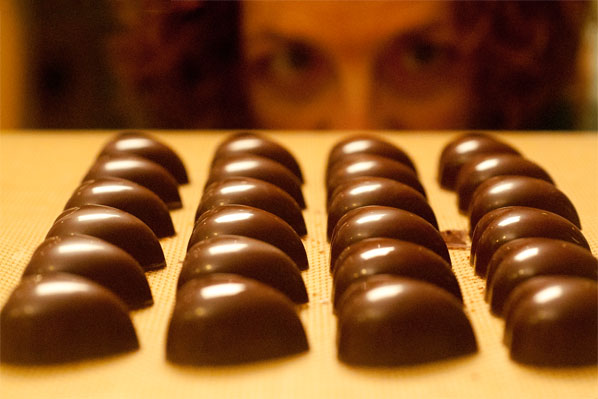 My son still hovers, looking for any imperfections, to help make those which are “not my best work” disappear.

With the hearts secure as my Plan B, I move onto making the actual, free-standing marshmallows.

For this, I return to my absolute favourite marshmallow recipe.

It is these marshmallows that have inspired me, and now that I have my lemon flavouring zeal in control, I use 1 ½ teaspoons of vanilla + ½ tsp Lemon Oil, in the last step.

While the marshmallows are setting up, in preparation for their final bath of chocolate, I read up a little bit on lemons – and, if the truth be told, to ensure that I haven’t poisoned anyone.

While there are many articles which extoll its virtues and the health benefits it provides, my favourite use of lemon has to be this one, courtesy of Wikipedia

‘A halved lemon is used as a finger moistener for those counting large amounts of bills, such as tellers and cashiers.’

I will have to ask my darling Auntie, who worked for years in a bank, and is also an excellent baker, whether she ever had recourse to this method!

The marshmallows have “set up” beautifully (thanks to the egg whites in the recipe, I think), and after I have cut away the sides and corners, am able to make straight-sided cubes, suitable for dipping. 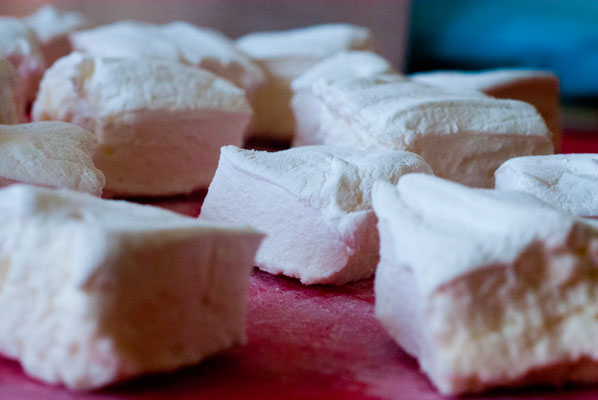 There are a few challenges I anticipate:

Once I have the bowl of tempered chocolate, the Silpat mat, and the Cheatar (the tool for scraping the excess chocolate from the bottoms) set up, I take a deep breath, grab the first marshmallow cube, throw it back and forth between my fingers to remove any excess of icing sugar, and plunge it into the tempered chocolate. 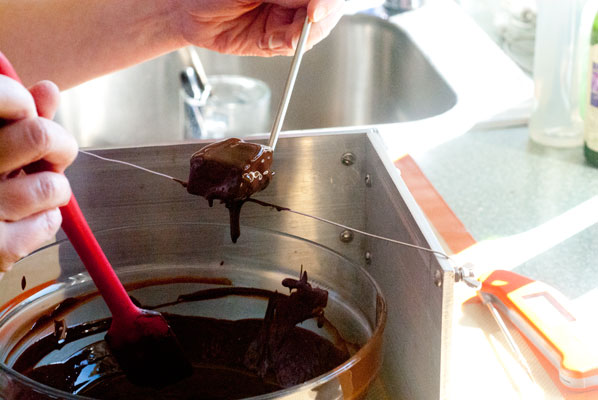 By balancing the marshmallow on the fork with the spatula as a “steadier”, I am still able to employ the “whack it on the surface of the chocolate five times” technique, to pull the chocolate down the sides.

When I oh-so-carefully wobble the newly enrobed marshmallow over to the mat, I am met with a new challenge – sliding the marshmallow off the fork, without its light weight toppling it over.

I have a few disasters, met with a great chorus of cheers by my family, who know these ones are destined for them, but I do manage to get a batch enrobed, and while not exactly pretty, as I remember those from that long ago Opening Night, they taste wonderful.

Next time, I will try to get the coating a bit thinner, which will require more practice.  My family heartily agrees, as they wolf down the “epic fails” of the batch.

A it turns out, I could have added more lemon oil to this batch, as I find these have a very mild lemon flavor – next time, I will split the difference:   1 teaspoon lemon oil + 1 tsp vanilla. 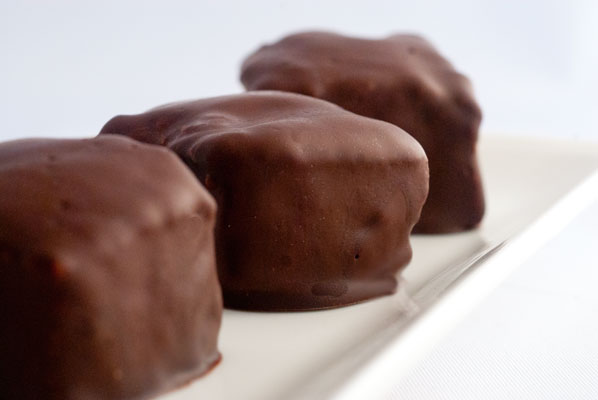 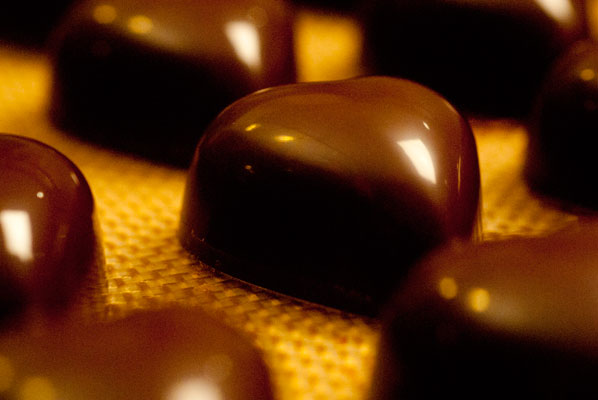 I have some attractive coffee bean cans I have been saving for just such a purpose as transporting marshmallows (they are far too big to comfortably into a small chocolate box), and with the hearts in one can and the marshmallows in the other, slip them into a carrier bag, and take myself off to the Opening Night.

I spot my friend Carol, the playwright, in the lobby as soon as I arrive, and after exchanging a hug, put the gift into her hands.  She is a wickedly funny person, and without hesitation, whips the lids from both cans and dives right in.

Any concerns I have about the intensity of flavor is lost in the sheer joy of watching Carol’s wholehearted enjoyment.

And while her play can hardly be described as fluffy – on the contrary, it is funny, sweet, moving and ultimately, has me in tears in its final moment – I feel as though I have, in a very small way, helped contribute to another successful Opening Night. 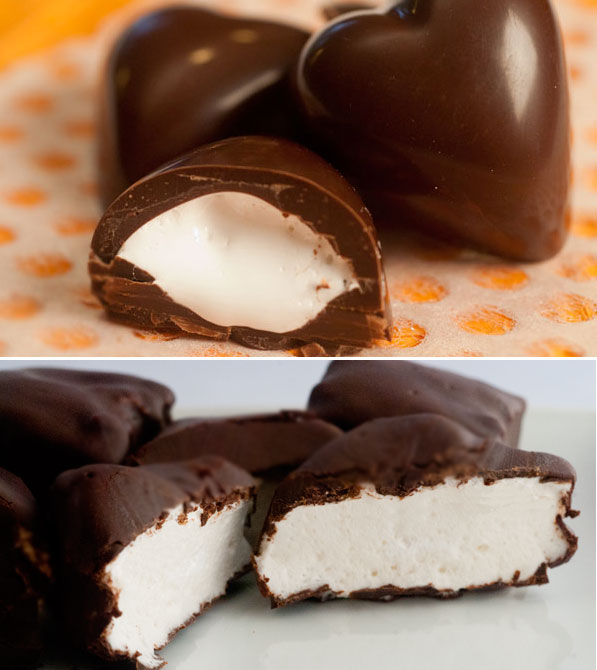