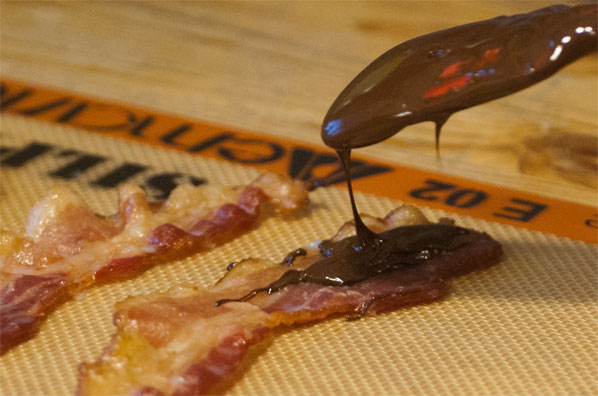 Big smiles broke out on my family’s faces when I mentioned I was going to have a go at making some of this.

Bacon and chocolate are two of their favorite taste sensations and as we had just finished listening to a radio interview with a woman who promotes eating bugs as part of a sustainable and protein-rich diet, I guess it is not surprising this combination raised nary an eyebrow.

Hmm.  Chocolate bugs.  Yep.  Think I’ll save that one for another post.

And, the boys are somewhat experienced in this sweet and savory flavor combination, having first sampled it in Mo’s Dark Chocolate Bacon Bar, from Vosges Chocolate.

Perhaps it’s because we’ve recently discovered some very tasty natural Hickory smoked bacon at our local Edgemont Village butcher shop, that even I, the avowed “I really don’t like eating pork” person, will eat (okay, truthfully I scarfed down four strips of it last time we had it) the time seems ripe to try working with the chocolate/bacon combination, myself.

But first, a few notes about this culinary delight, first served as chocolate covered bacon.  With references dating back to 2005, according to Wikipedia:

The dish has appeared on the television show Dinner: Impossible, as one of the foods served by chef Michael Symon as part of his “mission” to turn everyday boardwalk foods into a gourmet meal at the boardwalk in Wildwood, New Jersey.

Bacon was served with a chocolate dipping sauce at the 2009 Florida State Fair, where one review called chocolate covered bacon the “greatest thing since deep-fried Pepsi.”

I am very surprised to learn that deep fried Pepsi actually exists.  In no way do I wish my version of bacon chocolate to be compared to that stretch of gastronomic limits, however.  I will use the best ingredients I can find.

I visit Roque and Konrad at the butcher shop, to pick up some of their Hickory bacon and a pound of their regular sliced side bacon. 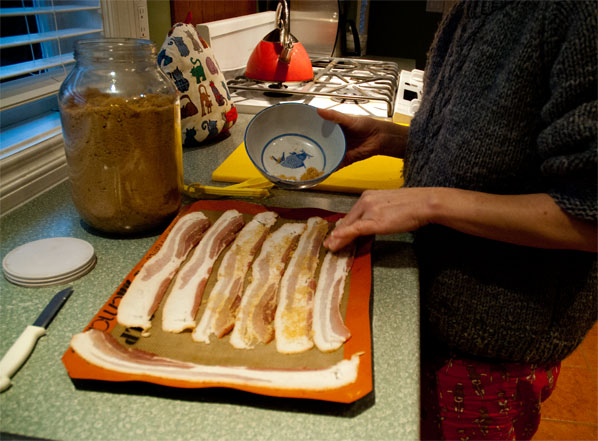 When I get this home, I find a wonderfully simple technique for candying bacon with brown sugar (which he uses in an ice cream), on David Lebovitz’ website.

The next morning, after sending the boys off to school, I get out my Silpat mats and prepare the strips of bacon by patting brown sugar into them and laying them out on the mat, with plenty of room between, to allow for browning.  David says to bake the strips 12-16 minutes, flipping halfway through, in a 400 degree F oven, but since mine is a convection oven, I drop the temperature to 375F.

After 12 minutes, the strips have rendered up a lot of fat, and are not caramelizing as I’d like them to, so I follow his excellent advice, and after draining off the fat and liquid sugar, I pat on more sugar, put the rashers on a rack over the mat in the pan, which is probably what I should have done from the get-go.  They take 20 minutes, all told, to achieve a nice colour:  he suggests mahogany (achieved by flipping the rashers at the half-way point, and dragging them through the accumulated syrupy sugar), but since I “changed horses in mid-stream”, mine are not quite so dark. 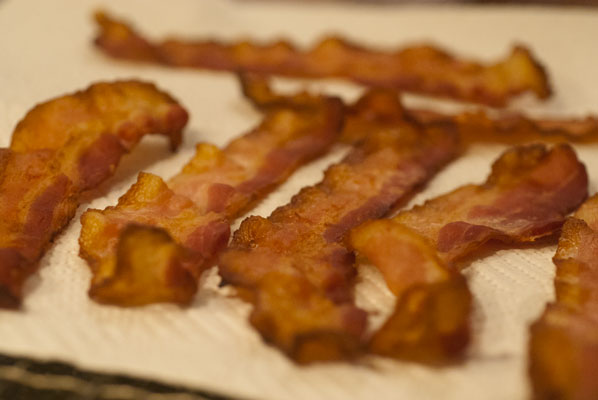 After a few minutes though, they firm up to a sticky candied marvel, and the small piece I break off to taste, is quite delicious.  I chop the candied rashers finely, then temper my dark chocolate, pour it into some flexible plastic bar molds (not my poly-carbonate bon bon molds – these are thin plastic) and liberally sprinkle the chopped candied bacon on top.  I shake the molds gently to break any air bubbles, pour on a little more chocolate to fill to the edges of the molds, and set them aside, on a marble slab to harden.  I ended up using approximately ½ cup of candied bacon to fill 8 – 3inch by 1inch bar molds. 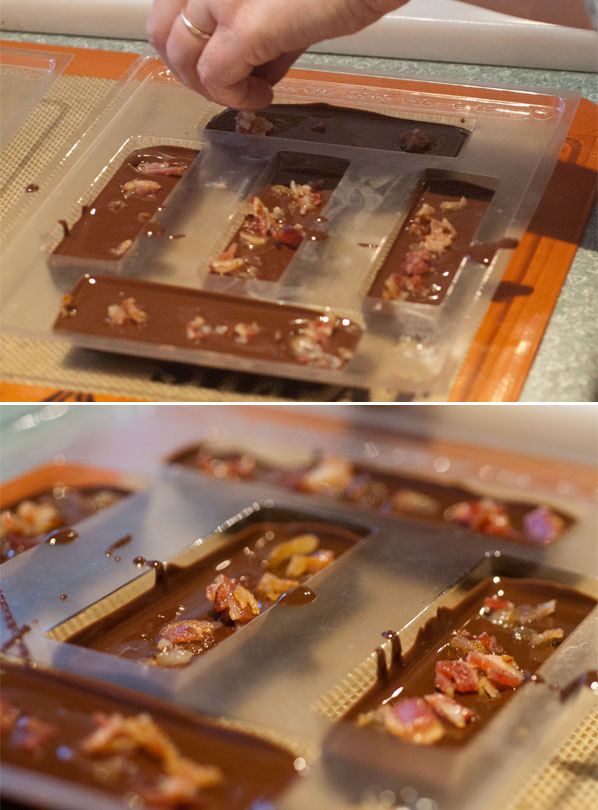 And that is that. Except that I have leftover bacon – about ¼ cup.

Rather than shamelessly wolf down the rest of it, which I am sorely tempted to do, I pull my creeping fingers away from the bacon, and set about tempering milk chocolate for cups.  These are the base for my favourite peanut butter cup recipe, which works equally well with milk or dark chocolate.

They will, this time, be augmented by bits of crunchy bacon.

I am tempted to throw in chunks of banana as well, and dub it “The Elvis”, but this would, I think, be “too much of a much-ness” for my taste. 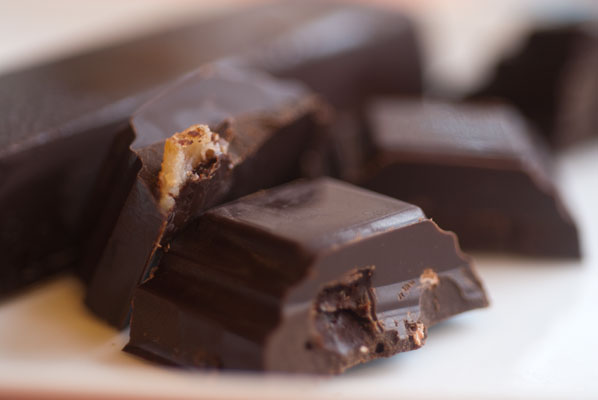 And now, the proof of the pudding, or pig, is in the tasting, so here are the family opinions of the dark chocolate/bacon bars:

Clearly, I needed to add more bacon, or perhaps, use a lighter (less bittersweet/lower cacao percentage) chocolate.  And here I was, thinking I would need a good dark chocolate to “stand up” to the bacon. 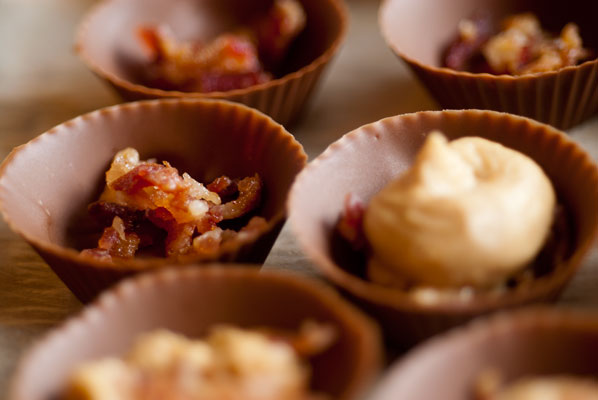 And, the milk chocolate/bacon/peanut butter cups:

So, this was a very good lesson for me, in concentrations of taste.  It makes me want to go back to the Philip Conticini tasting experiment.

Perhaps I should try this experiment again, to calibrate the balance of chocolate, bacon and peanut butter that will give a good hit of flavor, without being unpleasantly, um, meaty.

In the end, I half-coated some whole rashers of candied bacon with chocolate.  This, the simplest presentation of all, was definitely the hit in our house.  The taste and chewy texture of the candied bacon was nicely balanced by a small amount of dark chocolate.

Hmm.  More bacon, less chocolate.  Not something I would ever have dreamed I’d like, but once in a while, even I like to do something rash(er). 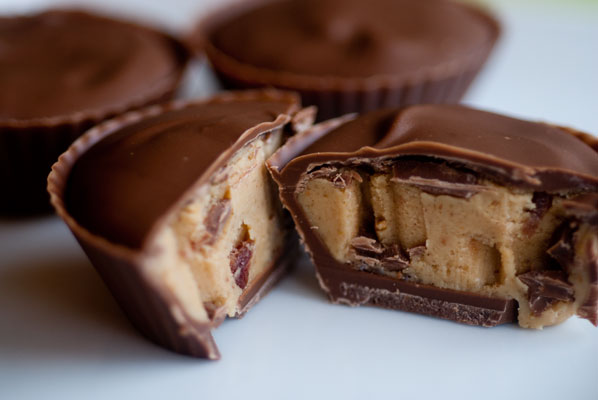