I was walking past Granville Island Brewing Company on Granville Island, on my way to a matinee performance of Snowman, on a chilly afternoon, appropriately enough.  Pressing my nose against their big windows looking into a bustling “neighbourhood house”, I noticed they had put up a big sign, promoting their HOP CHOCOLATE event.

Aww, I get it.  Even though I do not drink beer (it’s not an allergy, just body sense memory), I can appreciate the wit, and it gets me thinking about chocolate beer.

More accurately – chocolate stouts and porters.  According to Wikipedia:

“Stout is a dark beer made using roasted malt or barley, hops, water and yeast. Stouts were traditionally the generic term for the strongest or stoutest porters, typically 7% or 8%, produced by a brewery.

The name porter was first used in 1721 to describe a dark beer popular with street and river porters of London that had been made with roasted malts. This same beer later also became known as stout, though the word stout had been used as early as 1677.  The history and development of stout and porter are intertwined.

Chocolate stout is a name brewers sometimes give to certain stouts having a noticeable dark chocolate flavour through the use of darker, more aromatic malt; particularly chocolate malt — a malt that has been roasted or kilned until it acquires a chocolate colour. Sometimes, as with Muskoka Brewery’s Double Chocolate Cranberry Stout, Young’s Double Chocolate Stout, and Rogue Brewery’s Chocolate Stout, the beers are also brewed with a small amount of actual chocolate.” 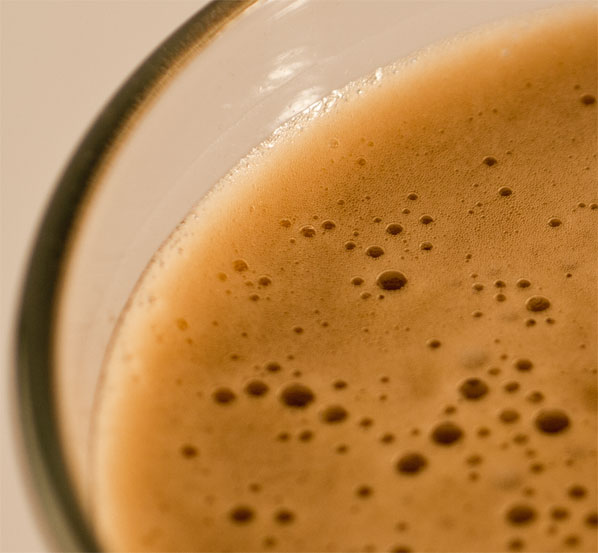 I have friends who are absolutely passionate about beer, who can wax as poetic about it, as I can about good chocolate:  people who grow their own hops, brew their own beer, who know the difference between a pilsner, a porter and a lager.

I call two of these erudite and well-spoken friends, and ask if they would do me the honour of taste testing 5 chocolate porters and stouts.

I will hold the clipboard, make notes, observe body language and vocal cues, as they go through the experience.

I will conduct the tasting in the comfort of their home, because the last thing I want is for them to drive home after imbibing five different beers.

I spend a delightful morning in preparation, acquainting myself with some very friendly and generous beer people, (thank you to Crystal Coverdale at Edgemont Fine Wines, Spirits and Ales, and the friendly staff at the BC Liquor store on 39th and Cambie) who also seem to love chocolate and who help me acquire a variety of chocolate stouts and porters:

I am really lucky to acquire a bottle of the Granville Island Chocolate Stout, as it goes into seasonal release to the public on November 28th, in British Columbia, as far afield as the Okanagen.  They will release 17,000 bottles at that time – but I am a few days early, on the scheduled day of the taste test!

When told this, at Granville Island Brewing, I am crestfallen, and explain about the blog.  The two wonderfully helpful sales associates immediately volunteer to see if there is anything to be done, and five minutes later, have procured me a very special, “advance copy” of the 2011 release, chilled, and ready to serve, through the generosity of Brewmaster Verne Lambourne.  I thank them profusely, pick up some Movember moustache coasters and am on my way.  I love dealing with our local business people! 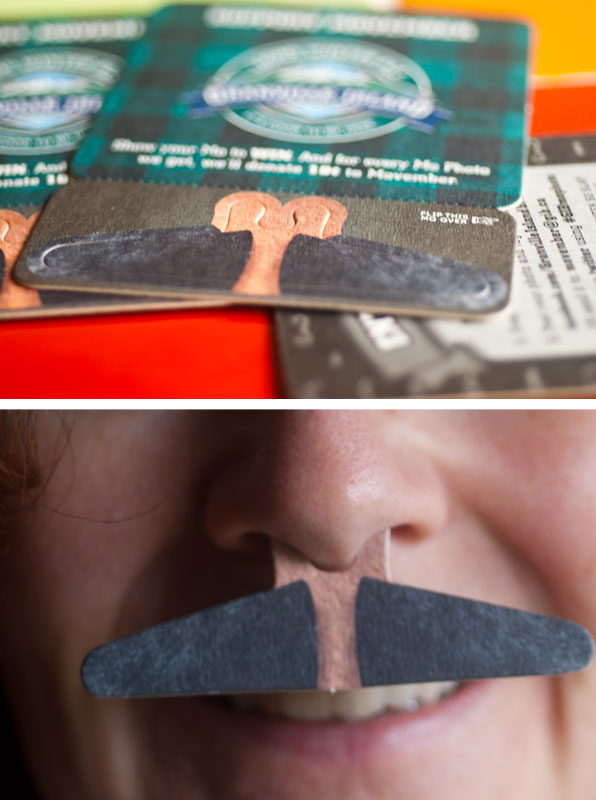 At my friends’ home, I hand them each a tasting form, and a Guittard flavor characteristics of chocolate wheel.  This is, of course, a bit different than a chocolate tasting (no snap and gloss to visualize and feel), but the principles are the same, and I sniff with interest as each bottle is opened. 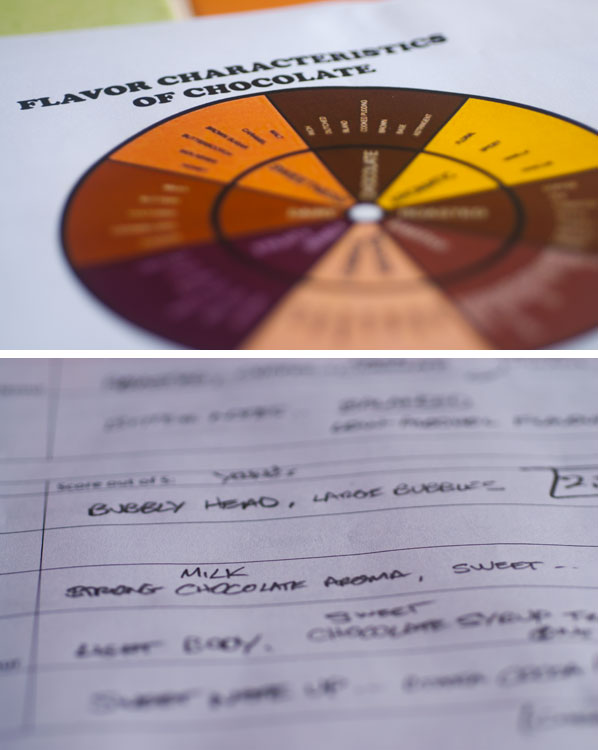 I hear “Hmmm”s, “Oh!”s, a faint “Uh-uh”.  I observe lip-smacking, as well as pulling back and involuntary shuddering from an occasional unexpected taste.  The foamy heads of the beers are also noted, as well as how quickly they dissipate.  We were careful to chill the ones which required chilling.

Here are the results and comments from my two expert friends: 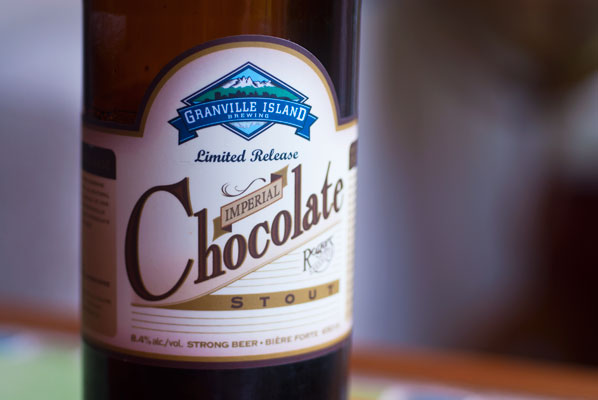 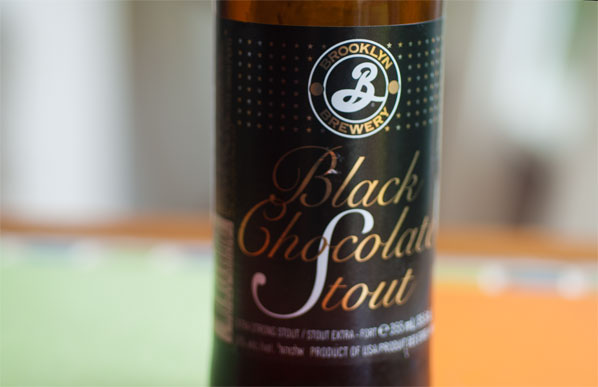 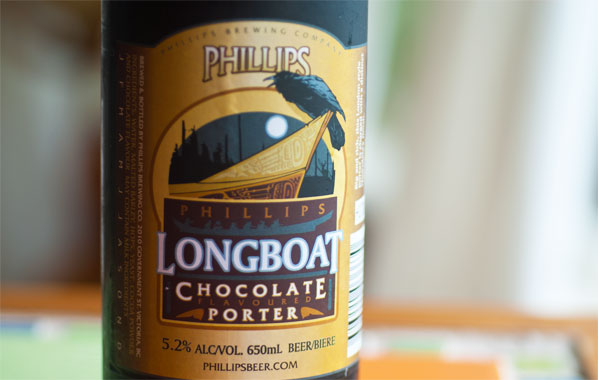 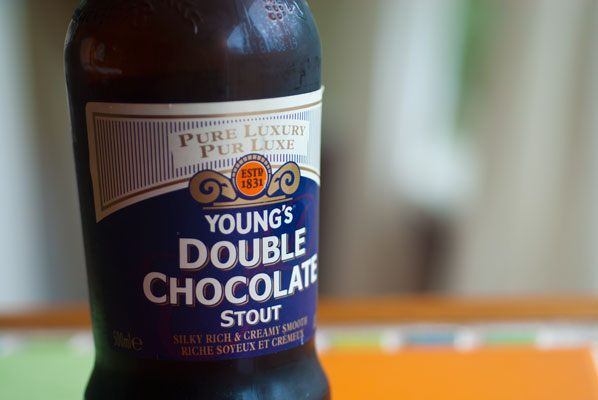 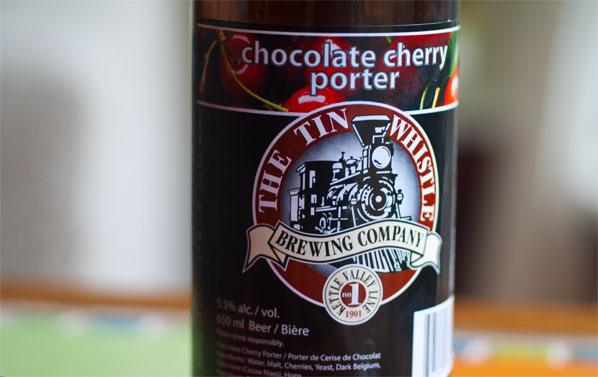 I am impressed, once again, at my choice in very intelligent friends, and at how diligently they have applied themselves to the task.  What interesting and clear tasting comments – very personal choices, of course.  But I love the strong opinions!

Arriving home with 5 partial bottles of stouts and porters, as my wise friends have quite satiated their taste for it, I am determined not to waste them, although no-one in our family will be imbibing.

A quick search of the internet, and I am inundated with likely looking recipes to use the bottles up.  I have, in the past few days, made the following, and they all turned out quite deliciously, much to my surprise!  On these chilly almost-winter days, they are truly “Good for what Ales You”. 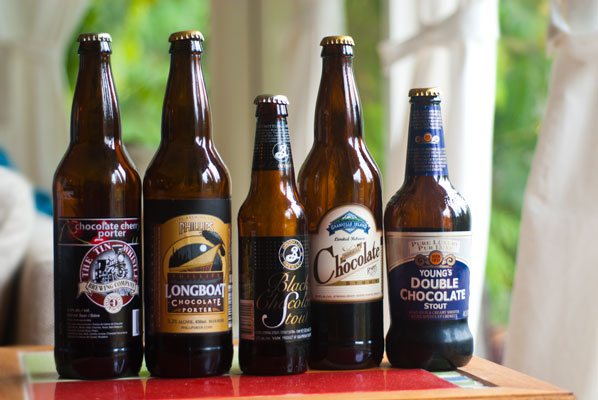