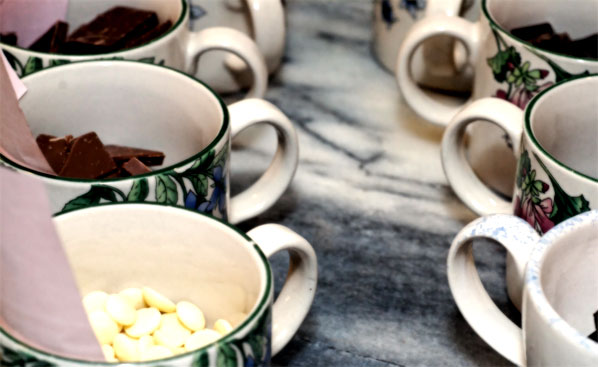 Well, I can confess it now:  I was really nervous about this, but once again, it has been made clear to me that I have the best friends a chocolate apprentice could ask for.

Five brave souls agreed to take part in my chocolate tasting, this week.  I was the sixth.  A stellar combination of actors, singers, producers, editors, smart people, those of refined palette and folk who just really love their food.

I summoned them to be at our house for ten in the morning.  As I said, good friends and true.  Asking an actor to get up before noon can be dodgy, but these guys had to get up, have their breakfast, coffee, brush their teeth, and NOT BE WEARING ANYTHING SCENTED, as the rules for chocolate tasting are as strict as those for wine.  All right, perhaps I didn’t sniff them as they arrived – that would have been rude – but there was much hugging and everybody appeared scentless.

I had drawn jugs of water earlier that morning, everyone had a glass of it for cleansing the palette, likewise a stack of table water crackers, and, my favourite, in place of pride in the centre of the table:  a tightly sealed jar of coffee beans, to be opened and sniffed when the aromas of the previous chocolate threatened to overwhelm the next to be tested. 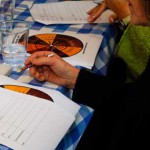 I was thoroughly impressed when I gave out my handouts on How to Taste Chocolate (carefully put together the night before, with much reference and thanks to the other students from the course, who had already posted the results of their tastings), and they all immediately began poring over them, making notes, correcting my questionable spelling, asking intelligent questions about why we were doing this – in short – treating this experience with as much professionalism as they would approach a new script or a document to be edited.

The Felchin Aroma Wheel made perfect sense to a group of people used to describing their feelings and emotions with great specificity.  So, I knew they would be able to discern and report on a chocolate with the “personality” of currant preserves versus one with hints of barn yard . 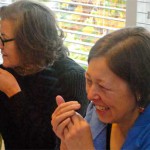 I stumbled my way through my introduction including a little bit of geographical information about where cacoa trees are grown (only in countries within 20 degrees of the Equator), tried to impart a little knowledge about harvesting and fermenting, and how brutally difficult and labour intensive these processes are, the differing species of cacao trees: the fragile criollo versus the hardier foresteros, and a little bit of the history and politics of this “elixir of the gods”.

I then explained how we would be using all five senses to experience the chocolate:  Appearance, Aroma, the sound of a distinctive Snap (or crumble), Mouthfeel, Chocolate Flavour and Other flavours, and finish.   They were to grade each of the eight samples on these criteria, and give them a score of 1 – 5, for overall enjoyment.

We had eight samples:  one white chocolate, two milk chocolates, and five dark, to be sampled in order of cocoa percentage, from least to greatest.

They eagerly flipped to their tasting templates, and we were off.  A hush fell over the group as, to a person, we ceremoniously picked up the first sample, regarded its appearance, and wedged it firmly between thumb and finger, to warm and extract the aromas, and to feel its texture.

Everyone fell to writing, sniffing, peering, snapping, pursing lips, rolling tongues, savouring.  And there was very little talking!  This is highly unusual with a group of theatre folk, unless it is a mime technique class, but I had said this was a blind test, and everyone worked very hard, concentrating on just the right wording for their impressions of each chocolate, without influencing the others. 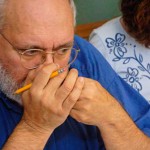 The water, the crackers and especially the coffee beans were used with increasing regularity as the sampling went on, and toward the end, I found myself wanting to take smaller and smaller pieces, as my palette became overwhelmed with rich, complex flavours.

When someone had found a particularly pleasing morsel, an audible “mmmmmm” would break the quiet.

And then, we were finished, and I needed a cup of coffee!

And, just like at the end of an intense rehearsal, the laughter and opinions broke free, and the room returned to noisy, relaxed normalcy!  I looked around at the table an noted the cracker crumbs, the melted chocolate, the empty sample cups, and the ones almost full.  Hmm, that was telling.

I did the big “reveal” of the different samples, some well known to the group, others completely unknown, and we shared opinions and impressions of each one. 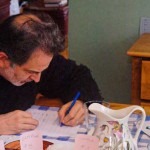 The comments were fantastic.  I was thoroughly impressed with the flavour and aroma complexities they were able to pick up and describe.  I have to say, they were far more complex than my own notes, which were rather hastily written.

I had planned for the group to be at the tasting for an hour and a half.  We were all a bit amazed when it turned out that two and a half hours had gone by!  Everyone agreed they had learned something about chocolate, and most importantly to me, it was a lot of fun.  I can’t thank them enough.

I bid my wonderful, wise friends and chocolate tasters a fond adieu, with some tiny French chocolate squares, and sat down with that cup of coffee to tabulate our results.

Here they are, in descending order of overall preference, with some of the comments:

Completely subjective, of course.  I am sure another group of people, at another time would have very different results.   We are so fortunate to have so many chocolates from which to choose. 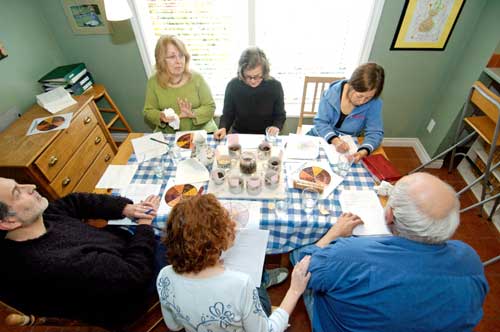 Here all the photos from our tasting – click on any one to see a larger version.